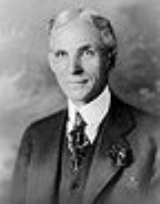 Overview
Henry Ford was an American industrialist, the founder of the Ford Motor Company
Ford Motor Company
Ford Motor Company is an American multinational automaker based in Dearborn, Michigan, a suburb of Detroit. The automaker was founded by Henry Ford and incorporated on June 16, 1903. In addition to the Ford and Lincoln brands, Ford also owns a small stake in Mazda in Japan and Aston Martin in the UK...
, and sponsor of the development of the assembly line
Assembly line
An assembly line is a manufacturing process in which parts are added to a product in a sequential manner using optimally planned logistics to create a finished product much faster than with handcrafting-type methods...
technique of mass production
Mass production
Mass production is the production of large amounts of standardized products, including and especially on assembly lines...
. His introduction of the Model T
Ford Model T
The Ford Model T is an automobile that was produced by Henry Ford's Ford Motor Company from September 1908 to May 1927...
automobile
History of the automobile
The history of the automobile begins as early as 1769, with the creation of steam engined automobiles capable of human transport. In 1806, the first cars powered by an internal combustion engine running on fuel gas appeared, which led to the introduction in 1885 of the ubiquitous modern gasoline-...
revolutionized transportation and American industry. As owner of the Ford Motor Company, he became one of the richest and best-known people in the world. He is credited with "Fordism
Fordism
Fordism, named after Henry Ford, is a modern economic and social system based on industrial mass production. The concept is used in various social theories about production and related socio-economic phenomena. It has varying but related meanings in different fields, as well as for Marxist and...
": mass production of inexpensive goods coupled with high wages for workers.

Can anybody point to documentation of the story that once Henry Ford visited (repair shops? Junk yards?) and inquired what Model T parts never broke? ...
More

What was Henry Ford

How did Ford feel about labor unions?

What other industries did Henry Ford venture into?

An idealist is a person who helps other people to be prosperous.

Remarks from the witness stand, to a court in Mount Clemens, Michigan (July 1919), as quoted in Thesaurus of Epigrams: A New Classified Collection of Witty Remarks, Bon Mots and Toasts (1948) by Edmund Fuller, p. 162

The average man won't really do a day's work unless he is caught and cannot get out of it. There is plenty of work to do if people would do it.

You can't build a reputation on what you are going to do.

As quoted in International Encyclopedia of Prose and Poetical Quotations (1951) by William S. Walsh

A business that makes nothing but money is a poor business.

When I see an Alfa Romeo go by, I tip my hat.

As quoted in Alfa Romeo. I creatori della Leggenda (1990) by Griffith Borgeson

You will find men who want to be carried on the shoulders of others, who think that the world owes them a living. They don't seem to see that we must all lift together and pull together.

As quoted in Wisdom & Inspiration for the Spirit and Soul (2004) by Nancy Toussaint, p. 85

My Life and Work by Henry Ford (Autobiography)
More
x