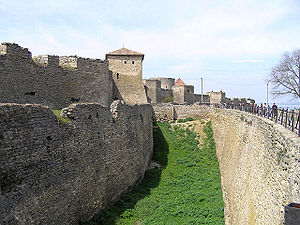 Stone walls are a kind of masonry
Masonry
Masonry is the building of structures from individual units laid in and bound together by mortar; the term masonry can also refer to the units themselves. The common materials of masonry construction are brick, stone, marble, granite, travertine, limestone; concrete block, glass block, stucco, and...
construction which have been made for thousands of years. First they were constructed by farmers and primitive people by piling loose field stones in what is called a dry stone wall, then later with the use of mortar
Mortar (masonry)
Mortar is a workable paste used to bind construction blocks together and fill the gaps between them. The blocks may be stone, brick, cinder blocks, etc. Mortar becomes hard when it sets, resulting in a rigid aggregate structure. Modern mortars are typically made from a mixture of sand, a binder...
and plaster
Plaster
Plaster is a building material used for coating walls and ceilings. Plaster starts as a dry powder similar to mortar or cement and like those materials it is mixed with water to form a paste which liberates heat and then hardens. Unlike mortar and cement, plaster remains quite soft after setting,...
especially in the construction of city walls, castle
Castle
A castle is a type of fortified structure built in Europe and the Middle East during the Middle Ages by European nobility. Scholars debate the scope of the word castle, but usually consider it to be the private fortified residence of a lord or noble...
s, and other fortification
Fortification
Fortifications are military constructions and buildings designed for defence in warfare and military bases. Humans have constructed defensive works for many thousands of years, in a variety of increasingly complex designs...
s prior to and during the Middle Ages
Middle Ages
The Middle Ages is a periodization of European history from the 5th century to the 15th century. The Middle Ages follows the fall of the Western Roman Empire in 476 and precedes the Early Modern Era. It is the middle period of a three-period division of Western history: Classic, Medieval and Modern...
.

Large structures are usually made of very thick walls, so that castles and cathedrals possess walls which may be up to 12 feet thick. They normally consist of a layered stone exterior and rubble
Rubble
Rubble is broken stone, of irregular size, shape and texture. This word is closely connected in derivation with "rubbish", which was formerly also applied to what we now call "rubble". Rubble naturally found in the soil is known also as brash...
infill.