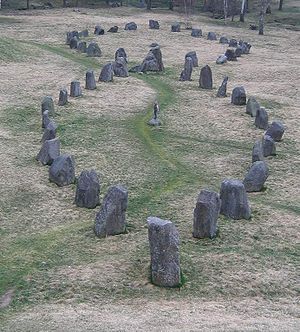 The Stone ship or ship setting was an early Germanic burial custom, characteristically Scandinavia
Scandinavia
Scandinavia is a cultural, historical and ethno-linguistic region in northern Europe that includes the three kingdoms of Denmark, Norway and Sweden, characterized by their common ethno-cultural heritage and language. Modern Norway and Sweden proper are situated on the Scandinavian Peninsula,...
n but also found in Germany and the Baltic states. The grave or cremation burial is surrounded by tightly or loosely fit slabs or stones in the outline of a ship. They are often found in grave fields, but are sometimes far from any other archaeological remains.

Ship settings are of varying sizes, some of monumental proportions. The largest known is the mostly destroyed Jelling stone ship
Jelling stone ship
The Jelling stone ship is a stone ship, the longest known to have existed, remains of which lie under the two royal barrows at Jelling, Denmark....
in Denmark, which was at least 170 metres long. In Sweden
Sweden
Sweden , officially the Kingdom of Sweden , is a Nordic country on the Scandinavian Peninsula in Northern Europe. Sweden borders with Norway and Finland and is connected to Denmark by a bridge-tunnel across the Öresund....
, the size varies from 67 metres (Ale's Stones
Ale's Stones
Ale's Stones is a megalithic monument in Scania in southern Sweden. It consists of a stone ship 67 meters long formed by 59 large boulders of sandstone, weighing up to 1.8 tonnes each. According to Scanian folklore, a legendary king called King Ale lies buried there.The carbon-14 dating system for...
) to only a few metres. The orientation also varies. Inside, they can be cobbled or filled with stones, or have raised stones in the positions of masts. The illusion of being ships has often been reinforced by larger stones at the ends. Some have an oblique stern.

Scattered examples are found in Northern Germany and along the coast of the Baltic States. Excavations have shown that they are usually from the latter part of the Nordic Bronze Age
Nordic Bronze Age
The Nordic Bronze Age is the name given by Oscar Montelius to a period and a Bronze Age culture in Scandinavian pre-history, c. 1700-500 BC, with sites that reached as far east as Estonia. Succeeding the Late Neolithic culture, its ethnic and linguistic affinities are unknown in the absence of...
, c.
Circa
Circa , usually abbreviated c. or ca. , means "approximately" in the English language, usually referring to a date...
1000 BC - 500 BC (e.g. Gotland
Gotland
Gotland is a county, province, municipality and diocese of Sweden; it is Sweden's largest island and the largest island in the Baltic Sea. At 3,140 square kilometers in area, the region makes up less than one percent of Sweden's total land area...
) or from the Germanic Iron Age
Germanic Iron Age
The Germanic Iron Age is the name given to the period 400–800 in Northern Europe and it is part of the continental Age of Migrations.-Germanic Iron :...
, the Vendel Age and the Viking Age
Viking Age
Viking Age is the term for the period in European history, especially Northern European and Scandinavian history, spanning the late 8th to 11th centuries. Scandinavian Vikings explored Europe by its oceans and rivers through trade and warfare. The Vikings also reached Iceland, Greenland,...
(e.g. Blekinge
Blekinge
' is one of the traditional provinces of Sweden , situated in the south of the country. It borders Småland, Scania and the Baltic Sea.The name "Blekinge" comes from the adjective bleke, which corresponds to the nautical term for "dead calm"....
and Scania
Scania
Scania is the southernmost of the 25 traditional non-administrative provinces of Sweden, constituting a peninsula on the southern tip of the Scandinavian peninsula, and some adjacent islands. The modern administrative subdivision Skåne County is almost, but not totally, congruent with the...
).

Scholars have suggested both that the stone ship developed out of the desire to equip the dead with everything he had in life, and alternatively that it was specifically associated with the journey to Hel. One puzzling feature is that they sometimes occur at the base of a barrow, enclosing a flat area presumably intended for public ceremonies.