The stone circles of the Iron Age
Iron Age
The Iron Age is the archaeological period generally occurring after the Bronze Age, marked by the prevalent use of iron. The early period of the age is characterized by the widespread use of iron or steel. The adoption of such material coincided with other changes in society, including differing...
(ca. 500 BC – ca. 400 AD) were a characteristic burial custom of southern Scandinavia, especially on Gotland
Gotland
Gotland is a county, province, municipality and diocese of Sweden; it is Sweden's largest island and the largest island in the Baltic Sea. At 3,140 square kilometers in area, the region makes up less than one percent of Sweden's total land area...
and in Götaland
Götaland
Götaland , Gothia, Gothland, Gothenland, Gautland or Geatland is one of three lands of Sweden and comprises provinces...
during the Pre-Roman Iron Age
Pre-Roman Iron Age
The Pre-Roman Iron Age of Northern Europe designates the earliest part of the Iron Age in Scandinavia, northern Germany, and the Netherlands north of the Rhine River. These regions feature many extensive archaeological excavation sites, which have yielded a wealth of artifacts...
and the Roman Iron Age
Roman Iron Age
The Roman Iron Age is the name that Swedish archaeologist Oscar Montelius gave to a part of the Iron Age in Scandinavia, Northern Germany and the Netherlands....
. In Sweden, they are called Domarringar (judge circles), Domkretsar (judge circles) or Domarsäten (judge seats). They should not be confused with the Stone circle
Stone circle
A stone circle is a monument of standing stones arranged in a circle. Such monuments have been constructed across the world throughout history for many different reasons....
s of the Bronze Age
Bronze Age
The Bronze Age is a period characterized by the use of copper and its alloy bronze as the chief hard materials in the manufacture of some implements and weapons. Chronologically, it stands between the Stone Age and Iron Age...
and Britain
Prehistoric Britain
For the purposes of this article, Prehistoric Britain is that period of time between the first arrival of humans on the land mass now known as Great Britain and the start of recorded British history...
. 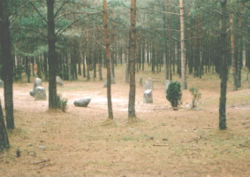 In the 1st century, the tradition was brought across the Baltic Sea to the area of modern-day Northern Poland, probably by the Goths
Goths
The Goths were an East Germanic tribe of Scandinavian origin whose two branches, the Visigoths and the Ostrogoths, played an important role in the fall of the Roman Empire and the emergence of Medieval Europe....
, as excavations made in 20th as well as in the end of 19th century indicate.

The stone circles were sometimes used as burial grounds.

The circles are usually round, or elongated ellipse
Ellipse
In geometry, an ellipse is a plane curve that results from the intersection of a cone by a plane in a way that produces a closed curve. Circles are special cases of ellipses, obtained when the cutting plane is orthogonal to the cone's axis...
s. The stones may be very large and they are usually between 9 and 12. Sometimes there are as few as 6–8. One stone circle, the circle of Nässja (near Vadstena
Vadstena
Vadstena is a locality and the seat of Vadstena Municipality, Östergötland County, Sweden, with 5,612 inhabitants in 2005. From 1974 to 1979 Vadstena was administered as part of Motala Municipality....
), comprises as many as 24 stones. Excavations have shown burnt coal in the centre of the circles and they are nowadays considered to be incineration graves.

There is a widespread tradition that the circles were used for thing
Thing (assembly)
A thing was the governing assembly in Germanic and introduced into some Celtic societies, made up of the free people of the community and presided by lawspeakers, meeting in a place called a thingstead...
s, or general assemblies. Similar circles were used for popular assemblies in Denmark until the 16th century, and in Vad parish in Västergötland
Västergötland
', English exonym: West Gothland, is one of the 25 traditional non-administrative provinces of Sweden , situated in the southwest of Sweden. In older English literature one may also encounter the Latinized version Westrogothia....
, the village assemblies were held in a stone circle until the 19th century.

As to funeral rites, the earliest age is called the Age of Burning; because all the dead were consumed by fire, and over their ashes were raised standing stones.