Encyclopedia
The Stone Bridge is a bridge across the Griboyedov Canal in Saint Petersburg
Saint Petersburg
Saint Petersburg is a city and a federal subject of Russia located on the Neva River at the head of the Gulf of Finland on the Baltic Sea...
, Russia
Russia
Russia or , officially known as both Russia and the Russian Federation , is a country in northern Eurasia. It is a federal semi-presidential republic, comprising 83 federal subjects...
. It was built in 1774-1778, and at the time it was one of the first bridges in Saint Petersburg made of stone, hence the name. The bridge crosses the canal on the axis of Gorokhovaya Street
Gorokhovaya Street
Gorokhovaya Street is a north-south thoroughfare in the Central Business District of Saint Petersburg.Gorokhovaya Street extends from the Admiralty and runs south, crossing the Moyka River and the Griboyedov Canal, crossing the Garden Street near Sennaya Square. Running south, crossing Fontanka...
connecting Kazansky and Spassky islands. Unlike many other bridges, this one did not undergo major reconstruction, and therefore preserves most of its original form from the 18th century. 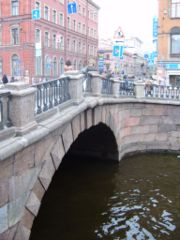 The modern Stone Bridge was constructed in the period of 1774 - 1778. Engineer V.I.Nazimov designed the project and engineer I.N.Borisov supervised the construction. The bridge replaced an older wooden Middle bridge which had existed at the same location since 1752. Prior to that time the bridges were wooden, and this was one of the first bridges built out of stone in St. Petersburg.
The arch
Arch
An arch is a structure that spans a space and supports a load. Arches appeared as early as the 2nd millennium BC in Mesopotamian brick architecture and their systematic use started with the Ancient Romans who were the first to apply the technique to a wide range of structures.-Technical aspects:The...
of the bridge is composed from granite
Granite
Granite is a common and widely occurring type of intrusive, felsic, igneous rock. Granite usually has a medium- to coarse-grained texture. Occasionally some individual crystals are larger than the groundmass, in which case the texture is known as porphyritic. A granitic rock with a porphyritic...
. The facade features flat granite blocks which alternate with four face pyramid shaped blocks (see picture on the left). Initially, the bridge featured four curved stairs descending to the water, but they were removed at the end of 19th century. Except for that detail, the bridge remained unchanged through the centuries. The pattern of railing repeats the one of the embankment.

The arch of the bridge is moderately steep. The first buses that appeared in Saint Petersburg had problems entering the bridge. When the bus was full, the driver would ask passengers to leave the bus at the entrance to the bridge, and cross the bridge on foot, while the empty bus would go over it.

In the summer of 1880, the members of the Narodnaya Volya organization planted dynamite
Dynamite
Dynamite is an explosive material based on nitroglycerin, initially using diatomaceous earth , or another absorbent substance such as powdered shells, clay, sawdust, or wood pulp. Dynamites using organic materials such as sawdust are less stable and such use has been generally discontinued...
under the bridge with the intent to detonate it when the carriage carrying emperor Alexander II
Alexander II of Russia
Alexander II , also known as Alexander the Liberator was the Emperor of the Russian Empire from 3 March 1855 until his assassination in 1881...
would be crossing the bridge. However, this operation was never realized, since the conspirators were not sure that seven pood
Pood
Pood , is a unit of mass equal to 40 funt . It is approximately 16.38 kilograms . It was used in Russia, Belarus and Ukraine. Pood was first mentioned in a number of documents of the 12th century....
s (approximately 115 kilograms) of dynamite would be enough to bring down the bridge. The hidden dynamite was extracted from the bottom of the canal in spring of 1881, after Alexander's assassination, during the Trial of the Fourteen
Trial of the Fourteen
The Trial of the Fourteen was a trial of fourteen members of Narodnaya Volya. It took place on September 24-28 , 1884 in Saint Petersburg's district military court. Vera Figner - the last member of the Executive Committee of Narodnaya Volya to remain in Russia - was the principal defendant...
.
The source of this article is wikipedia, the free encyclopedia.  The text of this article is licensed under the GFDL.