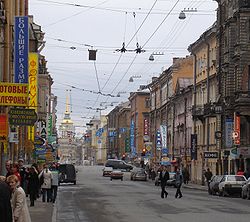 Gorokhovaya Street extends from the Admiralty and runs south, crossing the Moyka River and the Griboyedov Canal, crossing the Garden Street
Garden Street
Sadovaya Street or Garden Street is a major thoroughfare in Saint Petersburg, Russia, passing through the historic city center.From east to west, it begins near the Field of Mars, crosses the Moika River at the First Sadovy Bridge, then passes over Spassky Island, the Kryukov Canal , and Pokrovsky...
near Sennaya Square
Sennaya Square
Sennaya Square or Sennaya Ploshchad , known as Peace Square between 1963 and 1991, is a large city square in Central Saint Petersburg, located at the crossing of Garden Street, Moskovsky Prospekt, and Grivtsova Lane....
. Running south, crossing Fontanka River, it's home to the Semenovsky Bridge
Semenovsky Bridge
Semyonovsky Bridge or Semenovsky Bridge is a bridge across the Fontanka River in Saint Petersburg, Russia. It carries the Gorokhovaya Street. It was opened in 1733 as a wooden bridge, then rebuilt in stone in 1788, and subsequently modified in 1857 and 1949...
. The street ends at Zagorodny Prospect.

Gorokhovaya Street is one of central Saint Petersburg's major thoroughfares. The street is home to the Briantsev Youth Theatre, one of the first professional children's theatres in Russia
Russia
Russia or , officially known as both Russia and the Russian Federation , is a country in northern Eurasia. It is a federal semi-presidential republic, comprising 83 federal subjects...
, opened in 1922.

Rodion Raskolnikov, the main character of Dostoevsky's Crime and Punishment
Crime and Punishment
Crime and Punishment is a novel by the Russian author Fyodor Dostoyevsky. It was first published in the literary journal The Russian Messenger in twelve monthly installments during 1866. It was later published in a single volume. This is the second of Dostoyevsky's full-length novels following his...
, lived in an apartment house at Gorokhovaya Street. Also, the titular character of Ivan Goncharov
Ivan Goncharov
Ivan Alexandrovich Goncharov was a Russian novelist best known as the author of Oblomov .- Biography :Ivan Goncharov was born in Simbirsk ; his father was a wealthy grain merchant and respected official who was elected mayor of Simbirsk several times...
's novel Oblomov
Oblomov
Oblomov is the best known novel by Russian writer Ivan Goncharov, first published in 1859. Oblomov is also the central character of the novel, often seen as the ultimate incarnation of the superfluous man, a symbolic character in 19th-century Russian literature...
lives on the same street.