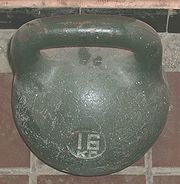 Pood is a unit of mass
Mass
Mass can be defined as a quantitive measure of the resistance an object has to change in its velocity.In physics, mass commonly refers to any of the following three properties of matter, which have been shown experimentally to be equivalent:...
equal to 40 funt (фунт, Russian pound). It is approximately 16.38 kilogram
Kilogram
The kilogram or kilogramme , also known as the kilo, is the base unit of mass in the International System of Units and is defined as being equal to the mass of the International Prototype Kilogram , which is almost exactly equal to the mass of one liter of water...
s (36.11 pound
Pound (mass)
The pound or pound-mass is a unit of mass used in the Imperial, United States customary and other systems of measurement...
s). It was used in Russia
Russia
Russia or , officially known as both Russia and the Russian Federation , is a country in northern Eurasia. It is a federal semi-presidential republic, comprising 83 federal subjects...
, Belarus
Belarus
Belarus , officially the Republic of Belarus, is a landlocked country in Eastern Europe, bordered clockwise by Russia to the northeast, Ukraine to the south, Poland to the west, and Lithuania and Latvia to the northwest. Its capital is Minsk; other major cities include Brest, Grodno , Gomel ,...
and Ukraine
Ukraine
Ukraine is a country in Eastern Europe. It has an area of 603,628 km², making it the second largest contiguous country on the European continent, after Russia...
. Pood was first mentioned in a number of documents of the 12th century.

Together with other units of weight
Weight
In science and engineering, the weight of an object is the force on the object due to gravity. Its magnitude , often denoted by an italic letter W, is the product of the mass m of the object and the magnitude of the local gravitational acceleration g; thus:...
of the Imperial Russian weight measurement system, pood was officially abolished by the USSR in 1924. However, the term remained in widespread use at least until the 1940s.

Its usage is preserved in modern Russian in certain specific cases, e.g., in reference to sports weights, such as traditional Russian kettlebell
Kettlebell
The kettlebell or girya is a cast-iron weight used to perform ballistic exercises that combine cardiovascular, strength and flexibility training.Sizes may range from to...
s, cast in multiples and fractions of 16 kg (which is pood rounded to metric units). For example, a 24 kg kettlebell is commonly referred to as "one-and-half pood kettlebell" (polutorapudovaya girya). It is also sometimes used when reporting the amounts of bulk agricultural production, such as grains or potatoes.

An old Russian proverb reads, "You never know a man until you have eaten a pood of salt with him."