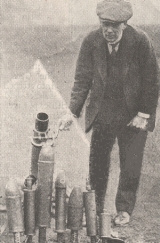 Encyclopedia
The Stokes mortar was a British
United Kingdom
The United Kingdom of Great Britain and Northern IrelandIn the United Kingdom and Dependencies, other languages have been officially recognised as legitimate autochthonous languages under the European Charter for Regional or Minority Languages...
trench mortar
Mortar (weapon)
A mortar is an indirect fire weapon that fires explosive projectiles known as bombs at low velocities, short ranges, and high-arcing ballistic trajectories. It is typically muzzle-loading and has a barrel length less than 15 times its caliber....
invented by Sir Wilfred Stokes KBE
Order of the British Empire
The Most Excellent Order of the British Empire is an order of chivalry established on 4 June 1917 by George V of the United Kingdom. The Order comprises five classes in civil and military divisions...
which was issued to the British Army
British Army
The British Army is the land warfare branch of Her Majesty's Armed Forces in the United Kingdom. It came into being with the unification of the Kingdom of England and Scotland into the Kingdom of Great Britain in 1707. The new British Army incorporated Regiments that had already existed in England...
and the Commonwealth
Commonwealth of Nations
The Commonwealth of Nations, normally referred to as the Commonwealth and formerly known as the British Commonwealth, is an intergovernmental organisation of fifty-four independent member states...
armies during the latter half of the First World War.

Frederick Wilfred Scott Stokes – who later became Sir Wilfred Stokes KBE – designed the mortar in January 1915. The British Army was at the time trying to develop a weapon which would be a match for the Imperial German Army's
German Army (German Empire)
The German Army was the name given the combined land forces of the German Empire, also known as the National Army , Imperial Army or Imperial German Army. The term "Deutsches Heer" is also used for the modern German Army, the land component of the German Bundeswehr...
Minenwerfer
Minenwerfer
Minenwerfer is the German name for a class of short range mortars used extensively during the First World War by the German Army...
mortar which was in use on the Western Front
Western Front (World War I)
Following the outbreak of World War I in 1914, the German Army opened the Western Front by first invading Luxembourg and Belgium, then gaining military control of important industrial regions in France. The tide of the advance was dramatically turned with the Battle of the Marne...
.

The mortar was in no sense a new weapon, although it had fallen out of general usage since the Napoleonic era
Napoleonic Era
The Napoleonic Era is a period in the history of France and Europe. It is generally classified as including the fourth and final stage of the French Revolution, the first being the National Assembly, the second being the Legislative Assembly, and the third being the Directory...
. In fact, while the British and French worked on developing new mortars, they resorted to issuing century-old mortars for use in action.

A modified version of the mortar firing a modern fin-stabilised streamlined projectile with a booster charge for longer range was developed after World War I but was in effect a new weapon.

The Stokes mortar remained in service until 1936, when it was superseded by the Ordnance ML 3 inch mortar
Ordnance ML 3 inch Mortar
The Ordnance ML 3-inch mortar was the United Kingdom's standard mortar used by the British Army from the late 1920s to the late 1960s, superseding the Stokes Mortar.-History:...
, and some remained in use by New Zealand
New Zealand
New Zealand is an island country in the south-western Pacific Ocean comprising two main landmasses and numerous smaller islands. The country is situated some east of Australia across the Tasman Sea, and roughly south of the Pacific island nations of New Caledonia, Fiji, and Tonga...
forces until after the Second World War.

As well as receiving a knighthood for inventing the mortar, Stokes was given several forms of monetary reward by the Ministry of Munitions for his invention including royalties
Royalties
Royalties are usage-based payments made by one party to another for the right to ongoing use of an asset, sometimes an intellectual property...
of £1 per Stokes mortar shell produced.

The Stokes mortar was a simple weapon, consisting of a smoothbore
Smoothbore
A smoothbore weapon is one which has a barrel without rifling. Smoothbores range from handheld firearms to powerful tank guns and large artillery mortars.-History of firearms and rifling:...
metal tube fixed to a base plate (to absorb recoil) with a lightweight bipod
Bipod
A bipod is a support device that is similar to a tripod or monopod, but with two legs. It provides significant stability along two axes of motion .-Firearms:...
mount. When a mortar bomb was dropped into the tube, an impact sensitive primer in the base of the bomb would make contact with a firing pin at the base of the tube, and detonate, firing the bomb towards the target.

The cast iron
Cast iron
Cast iron is derived from pig iron, and while it usually refers to gray iron, it also identifies a large group of ferrous alloys which solidify with a eutectic. The color of a fractured surface can be used to identify an alloy. White cast iron is named after its white surface when fractured, due...
mortar bomb cylinder was 3 inches (76.2 mm) in diameter, the caps at each end of the bomb cylinder were 81 mm diameter. The bomb was fitted with a modified hand grenade
Hand grenade
A hand grenade is any small bomb that can be thrown by hand. Hand grenades are classified into three categories, explosive grenades, chemical and gas grenades. Explosive grenades are the most commonly used in modern warfare, and are designed to detonate after impact or after a set amount of time...
fuze
Fuze
Fuze Beverage, commercially referred to as just Fuze , is a manufacturer of teas and non-carbonated fruit drinks enriched with vitamins. Currently the brand consists of five vitamin-infused lines: Slenderize, Refresh, Tea, Defensify, and Vitalize...
on the front, with a perforated tube containing a propellant charge and an impact-sensitive cap at the rear.

Range was determined by the amount of propellant charge used and the angle of the barrel. A basic propellant cartridge was used for all firing, and covered short ranges. Up to 4 additional "rings" of propellant were used for incrementally greater ranges. See range tables below. The 4 rings were supplied with the cartridge and gunners discarded the rings which were not needed.

The Stokes Mortar could fire as many as 25 bombs per minute and had a maximum range of 800 yards in World War I firing the original cylindrical unstabilised projectile.

One potential problem was the recoil which was "exceptionally severe, because the barrel is only about 3 times the weight of the projectile, instead of about one hundred times the weight as in artillery. Unless the legs are properly set up they are liable to injury".

British Empire units had 1,636 Stokes mortars in service on the Western Front
Western Front (World War I)
Following the outbreak of World War I in 1914, the German Army opened the Western Front by first invading Luxembourg and Belgium, then gaining military control of important industrial regions in France. The tide of the advance was dramatically turned with the Battle of the Marne...
at the Armistice.

A 4 inch version was used to fire smoke, poison gas and Thermit (incendiary) rounds but this should be considered a separate weapon to the standard 3 inch version firing high explosive rounds described in this article.

Cartridge : 95 grains ballistite
Ballistite
Ballistite is a smokeless propellant made from two high explosives, nitrocellulose and nitroglycerine. It was developed and patented by Alfred Nobel in the late 19th century.-The development of smokeless powders:...
, reinforced with Charges : 5 grains, guncotton yarn

Rings : 110 grains, .3 mm flake cordite
Cordite
Cordite is a family of smokeless propellants developed and produced in the United Kingdom from 1889 to replace gunpowder as a military propellant. Like gunpowder, cordite is classified as a low explosive because of its slow burning rates and consequently low brisance...