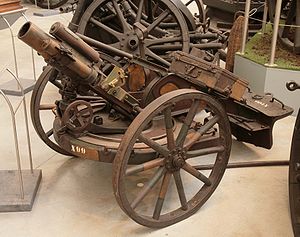 Minenwerfer is the German name for a class of short range mortars
Mortar (weapon)
A mortar is an indirect fire weapon that fires explosive projectiles known as bombs at low velocities, short ranges, and high-arcing ballistic trajectories. It is typically muzzle-loading and has a barrel length less than 15 times its caliber....
used extensively during the First World War by the German Army. The weapons were intended to be used by engineers to clear obstacles including bunkers and barbed wire, that longer range artillery would not be able to accurately target.

The Germans studied the Siege of Port Arthur
Siege of Port Arthur
The Siege of Port Arthur , 1 August 1904 – 2 January 1905, the deep-water port and Russian naval base at the tip of the Liaotung Peninsula in Manchuria, was the longest and most violent land battle of the Russo-Japanese War....
, where heavy artillery had been unable to destroy defensive structures like barbed wire and bunkers. The German Military Ingenieurkomitee (Engineer committee) began working with Rheinmetall
Rheinmetall
Rheinmetall AG is a German automotive and defence company with factories in Düsseldorf, Kassel and Unterlüß. The company has a long tradition of making guns and artillery pieces...
to study the problem in 1907. The solution they developed was short-barreled rifled muzzle-loading mortar, built in three sizes. The largest of these was introduced first, in 1910 as the 25 cm schwerer Minenwerfer (in English, the 25 cm large minelauncher) (sMW). Despite weighing only 955 kg (2193 pounds) it had the same effect on targets as the 28 cm and 30.5 cm mortars, which weighed ten times as much. At the outbreak of the First World War 44 had been delivered. They were used successfully in Belgium
Belgium
Belgium , officially the Kingdom of Belgium, is a federal state in Western Europe. It is a founding member of the European Union and hosts the EU's headquarters, and those of several other major international organisations such as NATO.Belgium is also a member of, or affiliated to, many...
at Liege and Namur
Namur (city)
Namur is a city and municipality in Wallonia, in southern Belgium. It is both the capital of the province of Namur and of Wallonia....
, and against the French
France
The French Republic , The French Republic , The French Republic , (commonly known as France , is a unitary semi-presidential republic in Western Europe with several overseas territories and islands located on other continents and in the Indian, Pacific, and Atlantic oceans. Metropolitan France...
fortress of Maubeuge
Maubeuge
Maubeuge is a commune in the Nord department in northern France.It is situated on both banks of the Sambre , east of Valenciennes and about from the Belgian border.-History:...
.

The light version of the weapon, the 7.58 cm leichter Minenwerfer
7.58 cm Minenwerfer
The 7.58 cm Minenwerfer a.A. was a German First World War mortar.-History:The Russo-Japanese War of 1905 had shown the value of mortars against modern fieldworks and fortifications and the Germans were in the process of fielding a whole series of mortars before the beginning of World War I...
(light mine launcher) (LMW) was still at the prototype stage when the war started, but rapidly entered production. The weapon was far more efficient than its artillery counterpart. In comparison the 7.7 cm FK 96 n/A needed to be towed by a team of six horses, compared with a single horse for the LMW, additionally the LMW could be moved around the battlefield by four men. The minenwerfer was cheaper, costing only one seventh as much as the artillery gun, and the ammunition was cheaper.

Since the muzzle velocity, and thus firing shock of the Minenwerfer was low, a variety of explosives that would usually be unsuitable for use in artillery were used to fill the shells. In any case, TNT explosive was reserved for use in artillery shells. Typically the explosives used in minenwerfers were Ammonium Nitrate-Carbon
Carbon
Carbon is the chemical element with symbol C and atomic number 6. As a member of group 14 on the periodic table, it is nonmetallic and tetravalent—making four electrons available to form covalent chemical bonds...
explosives. However the sensitivity of the explosives made them occasionally detonate in the tube. There were a large number of these incidents, one of which claimed the life of Karl Völler, head designer of Rheinmetall, in 1916. These problems, however, were eventually overcome.

Recognizing the numerous advantages of the Minenwerfer in trench warfare production was stepped up and by 1918 the numbers had increased dramatically to 1,234 heavy, 2,361 medium and 12,329 light Minenwerfer. A 38 cm calibre sehr schwerer Minenwerfer (ssMW) (in English, "very heavy mine launcher") was also developed.
The source of this article is wikipedia, the free encyclopedia.  The text of this article is licensed under the GFDL.