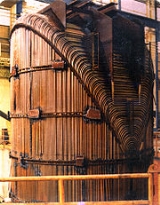 This is an article about nuclear power plant equipment. For other uses, see steam generator
Steam generator
A steam generator is a device used to boil water to create steam. It may refer to:*Boiler , a closed vessel in which water is heated under pressure...
. 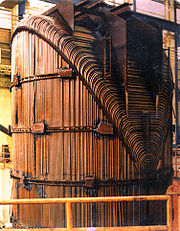 Steam generators are heat exchanger
Heat exchanger
A heat exchanger is a piece of equipment built for efficient heat transfer from one medium to another. The media may be separated by a solid wall, so that they never mix, or they may be in direct contact...
s used to convert water into steam
Steam
Steam is the technical term for water vapor, the gaseous phase of water, which is formed when water boils. In common language it is often used to refer to the visible mist of water droplets formed as this water vapor condenses in the presence of cooler air...
from heat produced in a nuclear reactor core
Nuclear reactor core
A nuclear reactor core is the portion of a nuclear reactor containing the nuclear fuel components where the nuclear reactions take place.- Description :...
. They are used in pressurized water reactor
Pressurized water reactor
Pressurized water reactors constitute a large majority of all western nuclear power plants and are one of three types of light water reactor , the other types being boiling water reactors and supercritical water reactors...
s between the primary and secondary coolant
Coolant
A coolant is a fluid which flows through a device to prevent its overheating, transferring the heat produced by the device to other devices that use or dissipate it. An ideal coolant has high thermal capacity, low viscosity, is low-cost, non-toxic, and chemically inert, neither causing nor...
loops.

That water flowing through the steam generator boils water on the shell side to produce steam in the secondary loop that is delivered to the turbine
Turbine
A turbine is a rotary engine that extracts energy from a fluid flow and converts it into useful work.The simplest turbines have one moving part, a rotor assembly, which is a shaft or drum with blades attached. Moving fluid acts on the blades, or the blades react to the flow, so that they move and...
s to make electricity
Electricity
Electricity is a general term encompassing a variety of phenomena resulting from the presence and flow of electric charge. These include many easily recognizable phenomena, such as lightning, static electricity, and the flow of electrical current in an electrical wire...
. The steam is subsequently condensed via cooled water from the tertiary loop and returned to the steam generator to be heated once again. The tertiary cooling water may be recirculated to cooling tower
Cooling tower
Cooling towers are heat removal devices used to transfer process waste heat to the atmosphere. Cooling towers may either use the evaporation of water to remove process heat and cool the working fluid to near the wet-bulb air temperature or in the case of closed circuit dry cooling towers rely...
s where it sheds waste heat before returning to condense more steam. Once through tertiary cooling may otherwise be provided by a river, lake, or ocean. This primary, secondary, tertiary cooling scheme is the most common way to extract usable energy from a controlled nuclear reaction.

These loops also have an important safety role because they constitute one of the primary barriers between the radioactive
Radioactive decay
Radioactive decay is the process by which an atomic nucleus of an unstable atom loses energy by emitting ionizing particles . The emission is spontaneous, in that the atom decays without any physical interaction with another particle from outside the atom...
and non-radioactive sides of the plant as the primary coolant becomes radioactive from its exposure to the core. For this reason, the integrity of the tubing is essential in minimizing the leakage of water between the two sides of the plant. There is the potential that, if a tube bursts while a plant is operating, contaminated steam could escape directly to the secondary cooling loop. Thus during scheduled maintenance outages or shutdowns, some or all of the steam generator tubes are inspected by eddy-current testing
Eddy-current testing
Eddy-current testing uses electromagnetic induction to detect flaws in conductive materials. There are several limitations, among them: only conductive materials can be tested, the surface of the material must be accessible, the finish of the material may cause bad readings, the depth of...
.

Westinghouse
Westinghouse Electric Company
Westinghouse Electric Company LLC is a nuclear power company, offering a wide range of nuclear products and services to utilities throughout the world, including nuclear fuel, service and maintenance, instrumentation and control and advanced nuclear plant designs...
and Combustion Engineering
Combustion Engineering
Combustion Engineering was an American engineering firm and leading firm in the development of power systems in the United States with approximately 30,000 employees in about a dozen states at its peak. Headquartered in Stamford, Connecticut, C-E owned over two dozen other companies including...
designs have vertical U-tubes with inverted tubes for the primary water. Canadian, Japanese, French, and German PWR suppliers use the vertical configuration as well. Russian VVER reactor designs use horizontal steam generators, which have the tubes mounted horizontally. Babcock and Wilcox
Babcock and Wilcox
The Babcock & Wilcox Company is a U.S.-based company that provides design, engineering, manufacturing, construction and facilities management services to nuclear, renewable, fossil power, industrial and government customers worldwide. B&W's boilers supply more than 300,000 megawatts of installed...
plants (e.g., Three Mile Island) have smaller steam generators that force water through the top of the OTSGs (once-through steam generators; counter-flow to the feedwater) and out the bottom to be recirculated by the reactor coolant pumps. The horizontal design has proven to be less susceptible to degradation than the vertical U-tube design.

Steam generators in a "typical" PWR in the USA have the following operating conditions:

Various high-performance alloys and superalloys have been used for steam generator tubing, including type 316 stainless steel
Stainless steel
In metallurgy, stainless steel, also known as inox steel or inox from French "inoxydable", is defined as a steel alloy with a minimum of 10.5 or 11% chromium content by mass....
, Alloy 400
Monel
Monel is a trademark of Special Metals Corporation for a series of nickel alloys, primarily composed of nickel and copper, with some iron and other trace elements. Monel was created by David H. Browne, chief metallurgist for International Nickel Co...
, Alloy 600MA (mill annealed
Annealing (metallurgy)
Annealing, in metallurgy and materials science, is a heat treatment wherein a material is altered, causing changes in its properties such as strength and hardness. It is a process that produces conditions by heating to above the recrystallization temperature, maintaining a suitable temperature, and...
), Alloy 600TT (thermally treated), Alloy 690TT, and Alloy 800Mod.