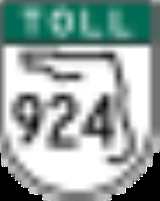 Encyclopedia
State Road 924 is a 8.49 miles (13.7 km) east–west highway connecting Interstate 75 and the Palmetto Expressway
State Road 826 (Florida)
State Road 826, also known as the Palmetto Expressway, is a bypass route around the greater Miami area, extending from U.S. Route 1 in Pinecrest, going through the inner Miami suburbs in a north-east semicircle to the Golden Glades Interchange, reverting to a surface street to its terminus at...
(SR 826) in Hialeah
Hialeah, Florida
Hialeah is a city in Miami-Dade County, Florida, United States. As of the 2000 census, the city population was 226,419. As of 2009, the population estimate by the U. S...
and SR 909
State Road 909 (Florida)
State Road 909 is a 3.77-mile state highway in northern Miami-Dade County, Florida, United States. It runs along West Dixie Highway, the original alignment of the Dixie Highway, from the east end of Gratigny Drive in North Miami northeast to North Miami Beach Boulevard in North Miami Beach, just...
(West Dixie Highway) in North Miami
North Miami, Florida
North Miami is a suburban city located in northeast Miami-Dade County, Florida, United States, about north of Miami. The city lies on Biscayne Bay and hosts the Biscayne Bay Campus of Florida International University, and the North Miami campus of Johnson & Wales University...
. The westernmost 4.85 miles (west of West 32nd Avenue), named the Gratigny Parkway (or simply, the Gratigny), is a limited access all-electronic toll road
Toll road
A toll road is a privately or publicly built road for which a driver pays a toll for use. Structures for which tolls are charged include toll bridges and toll tunnels. Non-toll roads are financed using other sources of revenue, most typically fuel tax or general tax funds...
maintained by the Miami-Dade Expressway Authority
Miami-Dade Expressway Authority
The Miami-Dade Expressway Authority is an independent agency created in December 1994 by the State of Florida and the Miami-Dade County Commission...
($1.00 SunPass toll, $1.30 toll-by-plate for automobiles); the easternmost 3.6 miles (5.8 km) is a surface street (Northwest 119th Street) also known as Gratigny Road. Despite its relatively short length, SR 924 is a major east–west artery in northern Miami-Dade County.

The road begins at the southern terminus of Interstate 75
Interstate 75 in Florida
Interstate 75 is a part of the Interstate Highway System and runs from Hialeah, Florida, a few miles northwest of Miami to Sault Ste. Marie in the Upper Peninsula of Michigan...
at the Palmetto Expressway at the border between Miami Lakes
Miami Lakes, Florida
Miami Lakes is a Miami suburban incorporated town and former census-designated place in Miami-Dade County, Florida, United States. The population was 22,676 at the 2000 census. As of 2004, the population recorded by the U.S...
and Hialeah
Hialeah, Florida
Hialeah is a city in Miami-Dade County, Florida, United States. As of the 2000 census, the city population was 226,419. As of 2009, the population estimate by the U. S...
. The road heads east as an eight lane expressway through Hialeah's residential areas and through the first of two $.50 toll gantries ($.65 for toll-by-plate users). Following the gantry, the expressway has its first interchange with NW 57th Avenue/Red Road, giving access to Opa-Locka Airport
Opa-locka Airport
Opa-locka Airport , also known as Opa-locka Executive Airport, is a general aviation airport and joint civil-military airfield 10 miles north of Downtown Miami, primarily in metropolitan Miami, Florida, United States, with a portion within the city proper of Opa-locka.The airport's control tower...
just north of the toll road. SR 924 then curves southeast, leaving Hialeah and heading towards the second $.50 toll gantry ($.65 for toll-by-plate users) in Opa-Locka
Opa-locka, Florida
Opa-locka is a city located in Miami-Dade County, Florida, United States. As of the mid decade census, the population was 15,376 as recorded by the U.S. Census Bureau....
, followed by an interchange with SR 953 before the expressway ends at NW 32nd Street, becoming NW 119th Street, a divided surface street heading due east. The road then becomes a mix of commercial and residential areas as it crosses SR 9, then reaching North Miami
North Miami, Florida
North Miami is a suburban city located in northeast Miami-Dade County, Florida, United States, about north of Miami. The city lies on Biscayne Bay and hosts the Biscayne Bay Campus of Florida International University, and the North Miami campus of Johnson & Wales University...
, intersecting with U.S. Route 441
U.S. Route 441 in Florida
U.S. Route 441 in Florida is a north–south United States Highway. It runs from Miami in South Florida northwest to the Georgia border north of the Lake City area....
/SR 7, followed by Interstate 95
Interstate 95 in Florida
Interstate 95 is the main Interstate Highway on the east coast of the United States; it serves the Atlantic coast of Florida. It begins at a partial interchange with U.S. Highway 1 just south of downtown Miami, and heads north past Daytona Beach and Jacksonville to the Georgia state line at the St...
, becoming a residential street before ending at SR 909.

Despite appearances, the Gratigny Parkway is not an outgrowth of an attempt to extend I-75 to connect with Interstate 95
Interstate 95 in Florida
Interstate 95 is the main Interstate Highway on the east coast of the United States; it serves the Atlantic coast of Florida. It begins at a partial interchange with U.S. Highway 1 just south of downtown Miami, and heads north past Daytona Beach and Jacksonville to the Georgia state line at the St...
. Initial plans for the Gratigny were devised in the 1960s, when planners had hoped to route I-75 along the Tamiami Trail
Tamiami Trail
The Tamiami Trail is the southernmost of U.S. Highway 41 from State Road 60 in Tampa to U.S. Route 1 in Miami. The road also has the hidden designation of State Road 90....
and the then-under construction "east–west Expressway" that opened (in 1969) as SR 836
State Road 836 (Florida)
State Road 836, locally known as the Dolphin Expressway, is a 19-mile-long six-lane divided expressway, with the westernmost 14 miles being a tollway, currently extending from just north of the intersection of Southwest 137th Avenue and U.S...
and eventually became known as the Dolphin Expressway. When plans for the major north–south Interstate changed so it would be routed along Alligator Alley
Alligator Alley
Alligator Alley is a section of Interstate 75 and State Road 84 extending from Naples on the west coast of Florida to Weston on the east...
instead, the proposed Opa-Locka Expressway was intended to be Miami-Dade County's second full east–west throughway.

Interestingly, the Opa-Locka Expressway was never intended to terminate at I-95, but merge with a surface street within a few blocks of it instead. Funding issues caused the Florida Department of Transportation
Florida Department of Transportation
The Florida Department of Transportation is a decentralized agency charged with the establishment, maintenance, and regulation of public transportation in the state of Florida. The department was formed in 1969. It absorbed the powers of the Florida State Road Department...
to mothball its construction plans for over a decade, but when the plan was revived, the changing demographics
Demographics
Demographics are the most recent statistical characteristics of a population. These types of data are used widely in sociology , public policy, and marketing. Commonly examined demographics include gender, race, age, disabilities, mobility, home ownership, employment status, and even location...
of the neighborhoods impacted by construction (an area with a predominantly white
Caucasian race
The term Caucasian race has been used to denote the general physical type of some or all of the populations of Europe, North Africa, the Horn of Africa, Western Asia , Central Asia and South Asia...
population in the 1960s became an area with a predominantly African-American and Hispanic
Hispanic
Hispanic is a term that originally denoted a relationship to Hispania, which is to say the Iberian Peninsula: Andorra, Gibraltar, Portugal and Spain. During the Modern Era, Hispanic sometimes takes on a more limited meaning, particularly in the United States, where the term means a person of ...
population in the 1980s). In 1982, racial politics killed the portion of the Opa-Locka Expressway that was planned for east of Northwest 32nd Avenue, and the proposed new expressway received a new name: the Gratigny Parkway.

Faced with rising construction costs in 1982, FDOT officials told the North Dade Chamber of Commerce that the Gratigny Parkway would be built as a toll road; and in the following year, the construction project was given a green light.

In 1984, increased opposition almost derailed construction of the expressway again, but this time the resistance came from residents of Miami Lakes
Miami Lakes, Florida
Miami Lakes is a Miami suburban incorporated town and former census-designated place in Miami-Dade County, Florida, United States. The population was 22,676 at the 2000 census. As of 2004, the population recorded by the U.S...
and Hialeah. Both communities didn't want any expressways to be built, even to the point of Hialeah amending its city charter to oppose all expressway construction within its city limits. Yet at that point, FDOT had already purchased 90% of the land needed for construction of the Gratigny Parkway - and it was determined to get it built. After a compromise that deleted one interchange with a major surface street (Ludlam Road/Northwest 67th Avenue), construction finally began in 1987.

The Gratigny Parkway opened to traffic in January 1992. At the time, no signs indicated the name of the toll road: they merely showed the SR 924 designation that it shared with Gratigny Road to the east. In 1997, the newly-established Miami-Dade Expressway Authority took over the operation from FDOT. New TOLL shields (with the MDX logo underneath them) made their appearance along the expressway but not the surface road to the east of 32nd Ave; the corner of Northwest 119th Street at 32nd Ave has an MDX "end 924" sign for the eastbound drivers, while on the other side of 32nd Ave an FDOT "east SR 924" sign greets people who wish to continue eastward on the surface street.

On June 7, 2010, the tolled section of SR 924 ceased collecting cash tolls and went completely electronic
Open road tolling
Open road tolling or free-flow tolling is the collection of tolls on toll roads without the use of toll booths. An electronic toll collection system is usually used instead. The major advantage to ORT is that users are able to drive through the toll plaza at highway speeds without having to slow...
, with SunPass
SunPass
SunPass is an electronic toll collection system in use by the State of Florida and was originally created by the Florida Department of Transportation's Florida's Turnpike...
users paying the same rate as before, but those without SunPass have to utilize the toll-by-plate program, which adds a 15 cent surcharge to every gantry they pass.