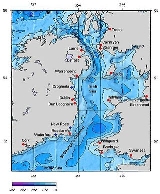 Encyclopedia
St George's Channel is a sea channel
Channel (geography)
In physical geography, a channel is the physical confine of a river, slough or ocean strait consisting of a bed and banks.A channel is also the natural or human-made deeper course through a reef, sand bar, bay, or any shallow body of water...
connecting the Irish Sea
Irish Sea
The Irish Sea separates the islands of Ireland and Great Britain. It is connected to the Celtic Sea in the south by St George's Channel, and to the Atlantic Ocean in the north by the North Channel. Anglesey is the largest island within the Irish Sea, followed by the Isle of Man...
to the north and the Celtic Sea
Celtic Sea
The Celtic Sea is the area of the Atlantic Ocean off the south coast of Ireland bounded to the east by Saint George's Channel; other limits include the Bristol Channel, the English Channel, and the Bay of Biscay, as well as adjacent portions of Wales, Cornwall, Devon, and Brittany...
to the southwest.

Historically, the name "St Georges Channel" was used interchangeably with "Irish Sea" or "Irish Channel" to encompass all the waters between Ireland
Ireland
Ireland is an island to the northwest of continental Europe. It is the third-largest island in Europe and the twentieth-largest island on Earth...
to the west and Great Britain
Great Britain
Great Britain or Britain is an island situated to the northwest of Continental Europe. It is the ninth largest island in the world, and the largest European island, as well as the largest of the British Isles...
to the east. Later it was restricted to the portion separating Wales
Wales
Wales is a country that is part of the United Kingdom and the island of Great Britain, bordered by England to its east and the Atlantic Ocean and Irish Sea to its west. It has a population of three million, and a total area of 20,779 km²...
from Leinster
Leinster
Leinster is one of the Provinces of Ireland situated in the east of Ireland. It comprises the ancient Kingdoms of Mide, Osraige and Leinster. Following the Norman invasion of Ireland, the historic fifths of Leinster and Mide gradually merged, mainly due to the impact of the Pale, which straddled...
, sometimes extending south to the waters between the West Country of England
West Country
The West Country is an informal term for the area of south western England roughly corresponding to the modern South West England government region. It is often defined to encompass the historic counties of Cornwall, Devon, Dorset and Somerset and the City of Bristol, while the counties of...
and East Munster
Munster
Munster is one of the Provinces of Ireland situated in the south of Ireland. In Ancient Ireland, it was one of the fifths ruled by a "king of over-kings" . Following the Norman invasion of Ireland, the ancient kingdoms were shired into a number of counties for administrative and judicial purposes...
; the latter have since the 1970s come to be called the Celtic Sea
Celtic Sea
The Celtic Sea is the area of the Atlantic Ocean off the south coast of Ireland bounded to the east by Saint George's Channel; other limits include the Bristol Channel, the English Channel, and the Bay of Biscay, as well as adjacent portions of Wales, Cornwall, Devon, and Brittany...
. In Ireland "St George's Channel" is now usually taken to refer only to the narrowest part of the channel, between Carnsore Point
Carnsore Point
Carnsore Point is a headland in the very South East corner of County Wexford, Ireland. This headland is Ireland's southern limit point of the Irish Sea....
in Wexford
County Wexford
County Wexford is a county in Ireland. It is part of the South-East Region and is also located in the province of Leinster. It is named after the town of Wexford. In pre-Norman times it was part of the Kingdom of Uí Cheinnselaig, whose capital was at Ferns. Wexford County Council is the local...
and St David's Head in Pembrokeshire
Pembrokeshire
Pembrokeshire is a county in the south west of Wales. It borders Carmarthenshire to the east and Ceredigion to the north east. The county town is Haverfordwest where Pembrokeshire County Council is headquartered....
. However, it remains common in Ireland to talk about a cross-channel trip, cross-channel soccer, etc., where "cross-channel" means "to/from Great Britain".

A 2004 letter from the St.George's Channel Shipping Company to Seascapes, an RTÉ Radio
RTÉ Radio
RTÉ Radio is a department of Irish national broadcaster Raidió Teilifís Éireann. RTÉ Radio broadcasts four analogue channels and five digital channels....
programme, said that St George's Channel bordered the Irish coast between Howth Head
Howth Head
Howth Head is a headland north east of Dublin City in Ireland. Howth falls under the local governance of fingal county council. Entry to the headland is at Sutton while village of Howth and the harbour are on the northern shore. Baily Lighthouse is on the southeastern part of Howth Head...
and Kilmore Quay
Kilmore Quay
Kilmore Quay is a fishing village near Duncormick, in County Wexford, Ireland. It has a population of 417.It is a fishing village, but its leisure facilities such as sailing, and sea angling charters are also of significant economic importance....
, and criticised contributors to the programme who had used "Irish Sea" for these waters.

The name "St George's Channel" is recorded in 1578 in Martin Frobisher
Martin Frobisher
Sir Martin Frobisher was an English seaman who made three voyages to the New World to look for the Northwest Passage...
's record of his second voyage. It is said to derive from a legend that Saint George
Saint George
Saint George was, according to tradition, a Roman soldier from Syria Palaestina and a priest in the Guard of Diocletian, who is venerated as a Christian martyr. In hagiography Saint George is one of the most venerated saints in the Catholic , Anglican, Eastern Orthodox, and the Oriental Orthodox...
had voyaged to Roman Britain
Roman Britain
Roman Britain was the part of the island of Great Britain controlled by the Roman Empire from AD 43 until ca. AD 410.The Romans referred to the imperial province as Britannia, which eventually comprised all of the island of Great Britain south of the fluid frontier with Caledonia...
from the Byzantine Empire
Byzantine Empire
The Byzantine Empire was the Eastern Roman Empire during the periods of Late Antiquity and the Middle Ages, centred on the capital of Constantinople. Known simply as the Roman Empire or Romania to its inhabitants and neighbours, the Empire was the direct continuation of the Ancient Roman State...
, approaching Britain via the channel that bears his name. The name was popularised by English settlers in Ireland after the Plantations
Plantations of Ireland
Plantations in 16th and 17th century Ireland were the confiscation of land by the English crown and the colonisation of this land with settlers from England and the Scottish Lowlands....
.