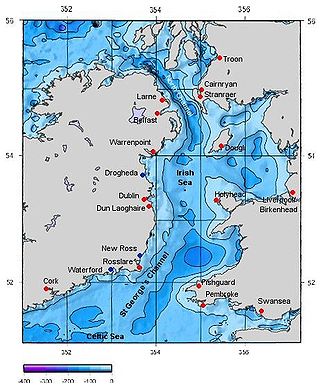 The North Channel is the strait
Strait
A strait or straits is a narrow, typically navigable channel of water that connects two larger, navigable bodies of water. It most commonly refers to a channel of water that lies between two land masses, but it may also refer to a navigable channel through a body of water that is otherwise not...
which separates eastern Northern Ireland
Northern Ireland
Northern Ireland is one of the four countries of the United Kingdom. Situated in the north-east of the island of Ireland, it shares a border with the Republic of Ireland to the south and west...
from southwestern Scotland
Scotland
Scotland is a country that is part of the United Kingdom. Occupying the northern third of the island of Great Britain, it shares a border with England to the south and is bounded by the North Sea to the east, the Atlantic Ocean to the north and west, and the North Channel and Irish Sea to the...
. It is part of the marine area officially classified as the "Inner Seas off the West Coast of Scotland
Inner Seas off the West Coast of Scotland
The Inner Seas off the West Coast of Scotland is a marine area designated by the International Hydrographic Organization . It consists of a number of waterbodies between the Scottish mainland, the Outer Hebrides islands, and the coast of Northern Ireland....
" by the International Hydrographic Organization
International Hydrographic Organization
The International Hydrographic Organization is the inter-governmental organisation representing the hydrographic community. It enjoys observer status at the UN and is the recognised competent authority on hydrographic surveying and nautical charting...
(IHO). In the nineteenth century, Alexander Keith Johnston's suggested name St Patrick's Channel had currency, but it was rejected by the hydrographic department.

The deepest part is called Beaufort's Dyke
Beaufort's Dyke
Beaufort's Dyke is the sea trench between Northern Ireland and Scotland within the North Channel. The dyke is 50 km long, 3.5 km wide and 200–300 metres deep....
. The Channel connects the Irish Sea
Irish Sea
The Irish Sea separates the islands of Ireland and Great Britain. It is connected to the Celtic Sea in the south by St George's Channel, and to the Atlantic Ocean in the north by the North Channel. Anglesey is the largest island within the Irish Sea, followed by the Isle of Man...
with the Atlantic Ocean
Atlantic Ocean
The Atlantic Ocean is the second-largest of the world's oceanic divisions. With a total area of about , it covers approximately 20% of the Earth's surface and about 26% of its water surface area...
, and was thus a favourite haunt of privateer
Privateer
A privateer is a private person or ship authorized by a government by letters of marque to attack foreign shipping during wartime. Privateering was a way of mobilizing armed ships and sailors without having to spend public money or commit naval officers...
s preying on British merchant shipping in wars up to the 19th century; in 1778, during the American Revolutionary War
American Revolutionary War
The American Revolutionary War , the American War of Independence, or simply the Revolutionary War, began as a war between the Kingdom of Great Britain and thirteen British colonies in North America, and ended in a global war between several European great powers.The war was the result of the...
it was also the site of a naval duel
North Channel naval duel
The North Channel naval duel was a single-ship action between the United States Continental Navy sloop of war Ranger and the British Royal Navy sloop of war Drake on the evening of 24 April 1778...
between American captain John Paul Jones
John Paul Jones
John Paul Jones was a Scottish sailor and the United States' first well-known naval fighter in the American Revolutionary War. Although he made enemies among America's political elites, his actions in British waters during the Revolution earned him an international reputation which persists to...
's Ranger
USS Ranger (1777)
The first USS Ranger was a sloop-of-war in the Continental Navy, and received the second salute to an American fighting vessel by a foreign power The first USS Ranger was a sloop-of-war in the Continental Navy, and received the second salute to an American fighting vessel by a foreign power The...
and the Royal Navy
Royal Navy
The Royal Navy is the naval warfare service branch of the British Armed Forces. Founded in the 16th century, it is the oldest service branch and is known as the Senior Service...
's Drake
HMS Drake (1777)
HMS Drake was a twenty-gun sloop-of-war of the Royal Navy. Originally named Resolution, she was purchased in 1777. She served in the American Revolutionary War, and on 24 April 1778, off Carrickfergus, Ireland, she fought the North Channel naval duel with the 18-gun sloop Ranger of the Continental...
. It is crossed by a large number of ferry
Ferry
A ferry is a form of transportation, usually a boat, but sometimes a ship, used to carry primarily passengers, and sometimes vehicles and cargo as well, across a body of water. Most ferries operate on regular, frequent, return services...
services. In 1953, it was the scene of a serious maritime disaster, the sinking of the ferry Princess Victoria
MV Princess Victoria
MV Princess Victoria was one of the earliest roll-on/roll-off ferries. Built in 1947, she operated from Stranraer to Larne. During a severe European windstorm on 31 January 1953, she sank in the North Channel with the loss of 133 lives, the deadliest maritime disaster in United Kingdom waters...
.

Unionist Northern Irish political leaders for decade
Decade
A decade is a period of 10 years. The word is derived from the Ancient Greek dekas which means ten. This etymology is sometime confused with the Latin decas and dies , which is not correct....
s lobbied the UK government to construct a rail-link tunnel under the North Channel
Irish Sea Tunnel
An Irish Sea Tunnel is a proposed tunnel that would link the island of Ireland to Great Britain beneath the Irish Sea. It has been suggested in the past largely for political reasons. It would be a railway tunnel, similar to the Channel Tunnel beneath the English Channel...
, the better to integrate Northern Ireland
Northern Ireland
Northern Ireland is one of the four countries of the United Kingdom. Situated in the north-east of the island of Ireland, it shares a border with the Republic of Ireland to the south and west...
with the rest of the United Kingdom
United Kingdom
The United Kingdom of Great Britain and Northern IrelandIn the United Kingdom and Dependencies, other languages have been officially recognised as legitimate autochthonous languages under the European Charter for Regional or Minority Languages...
. In August 2007 the Centre for Cross-Border Studies proposed the construction of a 34 km (21 mi) long rail
Rail transport
Rail transport is a means of conveyance of passengers and goods by way of wheeled vehicles running on rail tracks. In contrast to road transport, where vehicles merely run on a prepared surface, rail vehicles are also directionally guided by the tracks they run on...
bridge
Bridge
A bridge is a structure built to span physical obstacles such as a body of water, valley, or road, for the purpose of providing passage over the obstacle...
or tunnel
Tunnel
A tunnel is an underground passageway, completely enclosed except for openings for egress, commonly at each end.A tunnel may be for foot or vehicular road traffic, for rail traffic, or for a canal. Some tunnels are aqueducts to supply water for consumption or for hydroelectric stations or are sewers...
, estimating that it may cost approximately £3.5 billion. In the Victorian era
Victorian era
The Victorian era of British history was the period of Queen Victoria's reign from 20 June 1837 until her death on 22 January 1901. It was a long period of peace, prosperity, refined sensibilities and national self-confidence...
, engineers proposed a rail tunnel between Stranraer
Stranraer
Stranraer is a town in the southwest of Scotland. It lies in the west of Dumfries and Galloway and in the county of Wigtownshire.Stranraer lies on the shores of Loch Ryan on the northern side of the isthmus joining the Rhins of Galloway to the mainland...
and Belfast
Belfast
Belfast is the capital of and largest city in Northern Ireland. By population, it is the 14th biggest city in the United Kingdom and second biggest on the island of Ireland . It is the seat of the devolved government and legislative Northern Ireland Assembly...
.

This channel was formerly known as the Irish Channel.

The Irish Long Distance Swimming Association ILDSA has provided authentication observers for swimmers attempting to cross the approx 22 mile span between Northern Ireland
Northern Ireland
Northern Ireland is one of the four countries of the United Kingdom. Situated in the north-east of the island of Ireland, it shares a border with the Republic of Ireland to the south and west...
and the Mull of Galloway
Mull of Galloway
The Mull of Galloway is the southernmost point of Scotland. It is situated in Wigtownshire, Dumfries and Galloway.A lighthouse is positioned at the point . Built in 1830 by engineer Robert Stevenson, the white-painted round tower is high...
`. According to the ILDSA, this was first accomplished in 1947 by Tom Blower
Tom Blower
Tom Blower was a British man who on 27–28 July 1947 became the first to successfully swim the North Channel between Ireland and Scotland, completing the feat in 15 hours and 26 minutes. In spite of multiple attempts by others, the North Channel would not be successfully crossed by a swimmer again...
. Since that time, only 14 additional solo-swim attempts have been successful, accomplished by 10 different individuals.: