Kilmore Quay
is a fishing village
Village
A village is a clustered human settlement or community, larger than a hamlet with the population ranging from a few hundred to a few thousand , Though often located in rural areas, the term urban village is also applied to certain urban neighbourhoods, such as the West Village in Manhattan, New...
near Duncormick
Duncormick
Duncormick or Duncormac is a rural village and surrounding community located the R736 regional road in County Wexford, Ireland. At the 2002 census, it had a population of 503. The village is 11 miles from Wexford Town, close to the fishing village of Kilmore Quay which is one of the largest...
, in County Wexford
County Wexford
County Wexford is a county in Ireland. It is part of the South-East Region and is also located in the province of Leinster. It is named after the town of Wexford. In pre-Norman times it was part of the Kingdom of Uí Cheinnselaig, whose capital was at Ferns. Wexford County Council is the local...
, Ireland
Ireland
Ireland is an island to the northwest of continental Europe. It is the third-largest island in Europe and the twentieth-largest island on Earth...
. It has a population of 417.
It is a fishing village, but its leisure facilities such as sailing
Sailing
Sailing is the propulsion of a vehicle and the control of its movement with large foils called sails. By changing the rigging, rudder, and sometimes the keel or centre board, a sailor manages the force of the wind on the sails in order to move the boat relative to its surrounding medium and...
, and sea angling
Angling
Angling is a method of fishing by means of an "angle" . The hook is usually attached to a fishing line and the line is often attached to a fishing rod. Fishing rods are usually fitted with a fishing reel that functions as a mechanism for storing, retrieving and paying out the line. The hook itself...
charters are also of significant economic importance.

The village holds a seafood festival during the summer with seafood served everyday, live music in the local pubs, and activities such as raft
Raft
A raft is any flat structure for support or transportation over water. It is the most basic of boat design, characterized by the absence of a hull...
races, and family fun days (pony rides, theatre) on.

The Saltee Islands
Saltee Islands
The Saltee Islands are a pair of small islands lying 5 kilometres off the southern coast of County Wexford in Ireland. The two islands are Great Saltee and Little Saltee . They have been uninhabited since the early 20th century...
lie off the coast near Kilmore Quay, and boat trips to these islands are available from the village. The two islands, Great Saltee and Little Saltee, are mainly known for being Ireland's largest bird sanctuary
Bird Reserve
A bird reserve is a wildlife refuge designed to protect bird species. Like other wildlife refuges, the main goal of a reserve is to prevent species from becoming endangered or extinct. Typically, bird species in a reserve are protected from hunting and habitat destruction...
with gannet
Gannet
Gannets are seabirds comprising the genus Morus, in the family Sulidae, closely related to the boobies.The gannets are large black and white birds with yellow heads. They have long pointed wings and long bills. Northern gannets are the largest seabirds in the North Atlantic, with a wingspan of up...
s, gull
Gull
Gulls are birds in the family Laridae. They are most closely related to the terns and only distantly related to auks, skimmers, and more distantly to the waders...
s, puffin
Puffin
Puffins are any of three small species of auk in the bird genus Fratercula with a brightly coloured beak during the breeding season. These are pelagic seabirds that feed primarily by diving in the water. They breed in large colonies on coastal cliffs or offshore islands, nesting in crevices among...
s, cormorant
Cormorant
The bird family Phalacrocoracidae is represented by some 40 species of cormorants and shags. Several different classifications of the family have been proposed recently, and the number of genera is disputed.- Names :...
s, razorbill
Razorbill
The Razorbill is colonial seabird that will only come to land in order to breed. It is the largest living member of the Auk family. This agile bird will choose only one partner for life and females will lay one egg per year. Razorbills will nest along coastal cliffs in enclosed or slightly exposed...
s, and guillemot
Guillemot
Guillemots is the common name for several species of seabird in the auk family . In British use, the term comprises two genera: Uria and Cepphus. In North America the Uria species are called "murres" and only the Cepphus species are called "guillemots"...
s living on the islands. 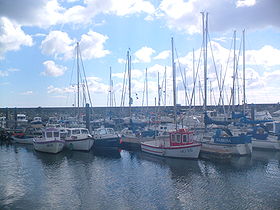 There is a boating marina
Marina
A marina is a dock or basin with moorings and supplies for yachts and small boats.A marina differs from a port in that a marina does not handle large passenger ships or cargo from freighters....
located in the harbour. This serves as a jumping off point for many Irish yacht
Yacht
A yacht is a recreational boat or ship. The term originated from the Dutch Jacht meaning "hunt". It was originally defined as a light fast sailing vessel used by the Dutch navy to pursue pirates and other transgressors around and into the shallow waters of the Low Countries...
s embarking on journeys to France
France
The French Republic , The French Republic , The French Republic , (commonly known as France , is a unitary semi-presidential republic in Western Europe with several overseas territories and islands located on other continents and in the Indian, Pacific, and Atlantic oceans. Metropolitan France...
and beyond. It is also the first landing point for many visitors from Britain
Great Britain
Great Britain or Britain is an island situated to the northwest of Continental Europe. It is the ninth largest island in the world, and the largest European island, as well as the largest of the British Isles...
and continental Europe
Continental Europe
Continental Europe, also referred to as mainland Europe or simply the Continent, is the continent of Europe, explicitly excluding European islands....
.