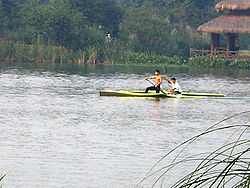 A sprint canoe is a special type of canoe
Canoe
A canoe or Canadian canoe is a small narrow boat, typically human-powered, though it may also be powered by sails or small electric or gas motors. Canoes are usually pointed at both bow and stern and are normally open on top, but can be decked over A canoe (North American English) or Canadian...
used in the sport of flatwater canoe racing
Canoe racing
This article discusses canoe sprint and canoe marathon, competitive forms of canoeing and kayaking on more or less flat water. Both sports are governed by the International Canoe Federation ....
.

A one-person sprint canoe is 5.20 metres long; a traveling canoe of a similar length would be suitable for 2 to 3 people with gear. Sprint canoes are paddled while kneeling on one knee (a person paddling on the left would kneel on their left knee), and the paddler never switches sides; this leads to constant j-stroking in a C-1. Typical boat types are C-1, C-2, C-4 and C-15 (War Canoe
War Canoe
A war canoe is a watercraft of the canoe type designed and outfitted for warfare, and which is found in various forms in many world cultures. In modern times, such designs have become adapted as a sport, and "war canoe" can mean a type of flatwater racing canoe.-War canoes as sport:War canoe is...
). There are two variants for C-4, the Canadian C-4 and the International C-4. The Canadian C-4 is fairly squat and wide, while the International C-4 retains the long and narrow hull of other racing canoes and kayaks. The War Canoe is found mostly in North America
North America
North America is a continent wholly within the Northern Hemisphere and almost wholly within the Western Hemisphere. It is also considered a northern subcontinent of the Americas...
, while all other events enjoy some popularity internationally, with concentrations in North America and Europe
Europe
Europe is, by convention, one of the world's seven continents. Comprising the westernmost peninsula of Eurasia, Europe is generally 'divided' from Asia to its east by the watershed divides of the Ural and Caucasus Mountains, the Ural River, the Caspian and Black Seas, and the waterways connecting...
.

Sprint canoes are extremely specialized; they are designed only to go fast on flat water in a straight line, with little or no provision for stability
Stability conditions (watercraft)
Stability conditions is the term used to describe the various standard loading configurations to which a ship, boat, or offshore platform may be subjected. They are recognized by classification societies such as Lloyd's Register, American Bureau of Shipping and Det Norske Veritas...
. Any high winds, waves, or currents will make these boats very difficult to handle, and could easily result in a capsize. As such, they are somewhat difficult to learn, as even the most stable C-1 will likely be the least stable boat a beginner has ever tried. Often beginners will start out in a larger, more stable boat, such as a C-4, to learn proper technique before trying a C-1.

A sprint kayak is very similar to a sprint canoe. A single is around 520 cm long, and generally just a bit wider than the athlete's hips. They also do not have any provision for stability, although they are easier to learn by using a stabler boat to get used to the balance.

There are three basic styles of canoe: delta, futura, and 2001.
The delta canoe is a diamond shaped (as seen from above) while having the widest point aft of center, and the futura style is narrower and flares out to the same width as the delta. The 2001 style, so called because of the rule change in 2001 which removed the width restriction, is generally as narrow as possible.

Sprint canoes are differentiated from racing shell
Racing shell
In watercraft, a racing shell is an extremely narrow, and often disproportionately long, rowing boat specifically designed for racing or exercise. It is outfitted with long oars, outriggers to hold the oarlocks away from the boat, and sliding seats...
s by their lack of riggers and oarlocks.