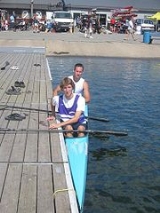 Overview
This article discusses canoe sprint and canoe marathon, competitive forms of canoeing
Canoeing
Canoeing is an outdoor activity that involves a special kind of canoe.Open canoes may be 'poled' , sailed, 'lined and tracked' or even 'gunnel-bobbed'....
and kayaking
Kayaking
Kayaking is the use of a kayak for moving across water. Kayaking and canoeing are also known as paddling. Kayaking is distinguished from canoeing by the sitting position of the paddler and the number of blades on the paddle...
on more or less flat water. Both sports are governed by the International Canoe Federation
International Canoe Federation
The International Canoe Federation is the umbrella organization of all national canoe organizations worldwide. It is headquartered in Lausanne, Switzerland, and administers all aspects of canoe sport worldwide...
(ICF).

Canoe sprint, which is referred to by the IOC as "canoe/kayak sprint", is one of the two forms of the canoeing disciplines that are featured in the Summer Olympics, the other being canoe slalom. Marathon racing is not an Olympic sport.

New Race on Lake of the Ozarks in Sept 2010
More

Encyclopedia
This article discusses canoe sprint and canoe marathon, competitive forms of canoeing
Canoeing
Canoeing is an outdoor activity that involves a special kind of canoe.Open canoes may be 'poled' , sailed, 'lined and tracked' or even 'gunnel-bobbed'....
and kayaking
Kayaking
Kayaking is the use of a kayak for moving across water. Kayaking and canoeing are also known as paddling. Kayaking is distinguished from canoeing by the sitting position of the paddler and the number of blades on the paddle...
on more or less flat water. Both sports are governed by the International Canoe Federation
International Canoe Federation
The International Canoe Federation is the umbrella organization of all national canoe organizations worldwide. It is headquartered in Lausanne, Switzerland, and administers all aspects of canoe sport worldwide...
(ICF).

Canoe sprint, which is referred to by the IOC as "canoe/kayak sprint", is one of the two forms of the canoeing disciplines that are featured in the Summer Olympics, the other being canoe slalom. Marathon racing is not an Olympic sport. In non-Olympic years, the main events are the World Championships.

Canoe racing combined with map navigation
Navigation
Navigation is the process of monitoring and controlling the movement of a craft or vehicle from one place to another. It is also the term of art used for the specialized knowledge used by navigators to perform navigation tasks...
is called Canoe orienteering
Canoe orienteering
Canoe orienteering is an orienteering sport using a canoe, kayak, or other small boat. Usually, a canoe-O is a timed race in which one- or two-person boats start at staggered intervals, are timed, and are expected to perform all navigation on their own. Portages are allowed. The control points,...
.

Marathons are long distance races on rivers, lakes, estuaria or open sea. The course may include obstacles such as shallows, rocks and portage
Portage
Portage or portaging refers to the practice of carrying watercraft or cargo over land to avoid river obstacles, or between two bodies of water. A place where this carrying occurs is also called a portage; a person doing the carrying is called a porter.The English word portage is derived from the...
s. Under ICF rules, the minimum distances for international races are 20 km for men, and 15 km for women. The races may be divided in several parts and/or several days. World Cup and World Championship races normally are about 35 to 40 km long. 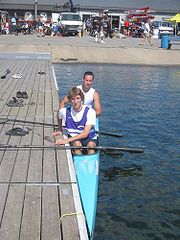 Canoe sprint takes place on a straight course divided in lanes, on calm water. The distances recognised by the ICF for international races are 200 m, 500 m, and 1000 m. Each boat has its own designated lane, except for races over more than 1000 m, where there also may be turning points. Men race in canoes and in kayaks, women in kayaks except in Canada and the United States where women's canoe is an event raced at both Canada Games and National Championships. For each race a number of heats, semi-finals and a final may be necessary, depending on the number of competitors.

In European Championships and World Championship competitions following events are also on the program. (Women's canoe debuted at the 2010 championships
2010 ICF Canoe Sprint World Championships
The 2010 ICF Canoe Sprint World Championships were held 19–22 August 2010 in Poznań, Poland, on Lake Malta. This is the third time that the Polish city will host the championships, having done so previously in 1990 and 2001...
in Poznań
Poznan
Poznań is a city on the Warta river in west-central Poland, with a population of 556,022 in June 2009. It is among the oldest cities in Poland, and was one of the most important centres in the early Polish state, whose first rulers were buried at Poznań's cathedral. It is sometimes claimed to be...
, Poland
Poland
Poland , officially the Republic of Poland , is a country in Central Europe bordered by Germany to the west; the Czech Republic and Slovakia to the south; Ukraine, Belarus and Lithuania to the east; and the Baltic Sea and Kaliningrad Oblast, a Russian exclave, to the north...
.)

This list of events appears in the European Championships and the World Championships, although 200 m races are not for juniors. 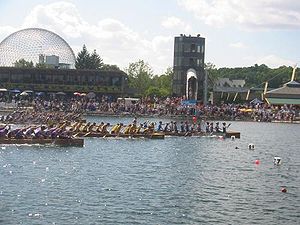 The official boats recognised by the ICF as 'International Boats' are the following: K1, K2, K4, C1, C2 and C4, where the number indicates the number of paddlers, “K” stands for kayak and “C” for Canadian or canoe, depending on location. Kayaks have a steering rudder
Rudder
A rudder is a device used to steer a ship, boat, submarine, hovercraft, aircraft or other conveyance that moves through a medium . On an aircraft the rudder is used primarily to counter adverse yaw and p-factor and is not the primary control used to turn the airplane...
, which is operated by the (frontmost) paddler with his feet; in a kayak a paddler is sitting, while in a canoe he is kneeling on one knee. The ICF rules for these boats define, among others, the maximum length, the minimum weight and the shape of the boats. For example, by ICF rules, a K1 is at most 520 cm long, and weighs at least 8 kg for marathons or 12 kg for sprints. In 2000, after the Olympic Games in Sydney, the ICF withdrew width restrictions on all boats, spurring a fury of innovations in boat designs. Modern boats are usually made of carbon fiber
Carbon fiber
Carbon fiber, alternatively graphite fiber, carbon graphite or CF, is a material consisting of fibers about 5–10 μm in diameter and composed mostly of carbon atoms. The carbon atoms are bonded together in crystals that are more or less aligned parallel to the long axis of the fiber...
and/or aramid fiber
Aramid
Aramid fibers are a class of heat-resistant and strong synthetic fibers. They are used in aerospace and military applications, for ballistic rated body armor fabric and ballistic composites, in bicycle tires, and as an asbestos substitute. The name is a portmanteau of "aromatic polyamide"...
(e.g., Kevlar
Kevlar
Kevlar is the registered trademark for a para-aramid synthetic fiber, related to other aramids such as Nomex and Technora. Developed at DuPont in 1965, this high strength material was first commercially used in the early 1970s as a replacement for steel in racing tires...
) with epoxy resin.

Some famous kayak marathon racers are Ivan Lawler, a seven-time world champion, and Anna Hemmings, a three-time world champion. At Olympic level, Hungary was the most successful canoeing nation overall in Sydney 2000, whilst Germany topped the Athens 2004 and Beijing 2008 canoeing medal tables.

In Canada, a racing class exists for the C-15 or WC or "War Canoe
War Canoe
A war canoe is a watercraft of the canoe type designed and outfitted for warfare, and which is found in various forms in many world cultures. In modern times, such designs have become adapted as a sport, and "war canoe" can mean a type of flatwater racing canoe.-War canoes as sport:War canoe is...
", as well as a similarly designed C-4 (which is much shorter and more squat than an 'International' C-4). An antiquated boat class is the C-7, resembling a large C4 which was debuted by the ICF with little success.

Paddle
Paddle
A paddle is a tool used for pushing against liquids, either as a form of propulsion in a boat or as an implement for mixing.-Materials and designs:...
s for propelling are double-bladed for kayaks, and single-bladed for canoes, and are usually made of carbon fiber with epoxy. For kayaks so-called wing paddles are generally used, the blades of which are shaped to resemble a wing
Wing
A wing is an appendage with a surface that produces lift for flight or propulsion through the atmosphere, or through another gaseous or liquid fluid...
. These paddles are more efficient than traditional paddles, presumably because they create extra "lift
Lift (force)
A fluid flowing past the surface of a body exerts a surface force on it. Lift is the component of this force that is perpendicular to the oncoming flow direction. It contrasts with the drag force, which is the component of the surface force parallel to the flow direction...
" in the direction the kayak moves. The wing blade has undergone many evolutions in the past two decades, evolving from a flatter blade to one with a more pronounced curve to better catch the water. For racing canoes
Sprint canoe
A sprint canoe is a special type of canoe used in the sport of flatwater canoe racing.A one-person sprint canoe is 5.20 metres long; a traveling canoe of a similar length would be suitable for 2 to 3 people with gear...
, the blade will typically be short and broad, with a 'power face' on one side that is either flat or scalloped out. The shaft will typically be longer than a tripping canoe paddle, because the kneeling position puts the paddler higher above the surface of the water. More recent designs of canoe racing paddles often have a slight bent shaft (a concept of Gene Jensen in the 1950s) but not to the degree used in marathon paddles. Many high-performance canoe paddlers prefer the feel of a carbon-fibre shaft mated to a wooden blade, while nearly all high-performance kayak paddlers use paddles made completely of carbon fiber.