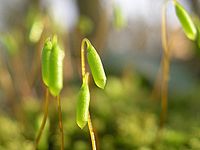 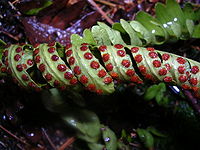 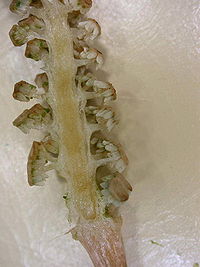 A sporangium (modern Latin, from Greek σπόρος (sporos) ‘spore’ + αγγείον (angeion) ‘vessel’) is an enclosure in which spores are formed. It can be composed of a single cell or can be multicellular. All plant
Plant
Plants are living organisms belonging to the kingdom Plantae. Precise definitions of the kingdom vary, but as the term is used here, plants include familiar organisms such as trees, flowers, herbs, bushes, grasses, vines, ferns, mosses, and green algae. The group is also called green plants or...
s, fungi
Fungus
A fungus is a member of a large group of eukaryotic organisms that includes microorganisms such as yeasts and molds , as well as the more familiar mushrooms. These organisms are classified as a kingdom, Fungi, which is separate from plants, animals, and bacteria...
, and many other lineages form sporangia at some point in their life cycle. Sporangia, also known as sporanges (sing., sporange), can produce spores by mitosis
Mitosis
Mitosis is the process by which a eukaryotic cell separates the chromosomes in its cell nucleus into two identical sets, in two separate nuclei. It is generally followed immediately by cytokinesis, which divides the nuclei, cytoplasm, organelles and cell membrane into two cells containing roughly...
, but in nearly all land plants and many fungi, sporangia are the site of meiosis
Meiosis
Meiosis is a special type of cell division necessary for sexual reproduction. The cells produced by meiosis are gametes or spores. The animals' gametes are called sperm and egg cells....
and produce genetically distinct haploid spores.

In mosses, liverworts and hornworts, an unbranched sporophyte
Sporophyte
All land plants, and some algae, have life cycles in which a haploid gametophyte generation alternates with a diploid sporophyte, the generation of a plant or algae that has a double set of chromosomes. A multicellular sporophyte generation or phase is present in the life cycle of all land plants...
produces a single sporangium, which may be quite complex morphologically. Most non-vascular plants, as well as many lycophytes and most ferns, are homosporous (only one kind of spore is produced). Some bryophytes, most lycophytes, and some ferns are heterosporous (two kinds of spores are produced). These plants produce microspores and megaspores, which give rise to gametophytes that are functionally male or female, respectively. In some cases, both kinds of spores are produced in the same sporangium, and may even develop together as part of a spore tetrad. However, in most heterosporous plants there are two kinds of sporangia, termed microsporangia and megasporangia. A few ferns (Salviniaceae
Salviniaceae
Salviniaceae , is a family of ferns....
and Marsileaceae
Marsileaceae
The Marsileaceae are a small family of heterosporous aquatic and semi-aquatic ferns, though at first sight they do not physically resemble other ferns. The group is commonly known as the "pepperwort family" or as the "water-clover family" because the leaves of the genus Marsilea superficially...
) and most lycophytes (the genera Selaginella and Isoetes and the extinct lepidodendrids) are heterosporous with two kinds of sporangia, as are all the seed plants.

Sporangia can be terminal (on the tips) or lateral (placed along the side) of stems or associated with leaves. In fern
Fern
A fern is any one of a group of about 12,000 species of plants belonging to the botanical group known as Pteridophyta. Unlike mosses, they have xylem and phloem . They have stems, leaves, and roots like other vascular plants...
s, sporangia are typically found on the abaxial surface (underside) of the leaf and are densely aggregated into clusters called sori. Sori may be covered by a structure called an indusium. Some ferns have their sporangia scattered along reduced leaf segments or along (or just in from) the margin of the leaf.

Lycophytes, in contrast, bear their sporangia on adaxial surface (the upper side) of leaves or laterally on stems.

In seed plants, sporangia are typically located within strobili or flowers.

Categorized based on developmental sequence, eusporangia and leptosporangia are differentiated in the vascular plants.

A cluster of sporangia that have become fused in development is called a synangium. This structure is most prominent in Psilotum
Psilotum
Psilotum is a genus of fern-like vascular plants, one of two genera in the family Psilotaceae, order Psilotales, and class Psilotopsida...
and Marattiaceae such as Christensenia
Christensenia
Christensenia is a genus of ferns in the botanical family Marattiaceae. The genus is confined to the Indo-Malayan region. The basal chromosome number for this genus is 2n=80....
, Danaea
Danaea
Danaea Sm. is a fern genus of approximately 50 species in the eusporangiate fern family Marattiaceae.they are small to intermediately large ferns with erect or creeping rhizomes and usually once pinnate leaves with opposite pinnae. The fertile leaves are contracted, acrostichoid and covered below...
and Marattia
Marattia
Marattia is a small genus of primitive, large, fleshy ferns. It is the type genus of the family Marattiaceae. Formerly considered to be a much larger genus, recent genetic analysis by Murdock demonstrated its serious paraphyly, splitting off the genera Ptisana and Eupodium....
.

A columella (pl. columellae) is a sterile (non-reproductive) structure that extends into and supports the sporangium. In fungi, the columella, which may be branched or unbranched, may be of fungal or host origin. Secotium
Secotium
Secotium is a genus of fungi in the family Agaricaceae.The members of this genus are closely related to ordinary Agaricus mushrooms, but do not open out in the usual way; this has given rise to the term "secotioid" for such mushrooms in general...
species have a simple, unbranched columella, while in Gymnoglossum
Gymnoglossum
Gymnoglossum is a genus of fungi in the Bolbitiaceae family of mushrooms.-External links:* at Index Fungorum...
species, the columella is branched. In some Geastrum
Geastrum
Geastrum is a genus of mushroom in the family Geastraceae. Many species are known commonly as earthstars.The name comes from geo meaning earth and aster meaning star....
species, the columella appears as an extension of the stalk into the spore mass (gleba
Gleba
Gleba is the fleshy spore-bearing inner mass of fungi such as the puffball or stinkhorn.The gleba is a solid mass of spores, generated within an enclosed area within the sporocarp. The continuous maturity of the sporogenous cells leave the spores behind as a powdery mass that can be easily blown away...
).