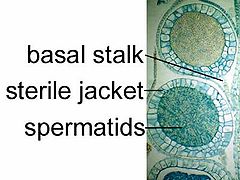 An antheridium or antherida (plural: antheridia) is a haploid structure or organ producing and containing male gamete
Gamete
A gamete is a cell that fuses with another cell during fertilization in organisms that reproduce sexually...
s (called antherozoids or sperm
Sperm
The term sperm is derived from the Greek word sperma and refers to the male reproductive cells. In the types of sexual reproduction known as anisogamy and oogamy, there is a marked difference in the size of the gametes with the smaller one being termed the "male" or sperm cell...
). It is present in the gametophyte
Gametophyte
A gametophyte is the haploid, multicellular phase of plants and algae that undergo alternation of generations, with each of its cells containing only a single set of chromosomes....
phase of lower plants like moss
Moss
Mosses are small, soft plants that are typically 1–10 cm tall, though some species are much larger. They commonly grow close together in clumps or mats in damp or shady locations. They do not have flowers or seeds, and their simple leaves cover the thin wiry stems...
es and fern
Fern
A fern is any one of a group of about 12,000 species of plants belonging to the botanical group known as Pteridophyta. Unlike mosses, they have xylem and phloem . They have stems, leaves, and roots like other vascular plants...
s, and also in the primitive vascular psilotophytes. Many algae and some fungi
Fungus
A fungus is a member of a large group of eukaryotic organisms that includes microorganisms such as yeasts and molds , as well as the more familiar mushrooms. These organisms are classified as a kingdom, Fungi, which is separate from plants, animals, and bacteria...
, for example ascomycetes and water mould
Water mould
Oömycota or oömycetes form a distinct phylogenetic lineage of fungus-like eukaryotic microorganisms . They are filamentous, microscopic, absorptive organisms that reproduce both sexually and asexually...
s, also have antheridia during their reproductive stages.

An antheridium typically consists of sterile cell
Cell (biology)
The cell is the basic structural and functional unit of all known living organisms. It is the smallest unit of life that is classified as a living thing, and is often called the building block of life. The Alberts text discusses how the "cellular building blocks" move to shape developing embryos....
s and spermatogenous tissue
Tissue (biology)
Tissue is a cellular organizational level intermediate between cells and a complete organism. A tissue is an ensemble of cells, not necessarily identical, but from the same origin, that together carry out a specific function. These are called tissues because of their identical functioning...
. The sterile cells may form a central support structure or surround the spermatogenous tissue as a protective jacket. The spermatogenous cells give rise to spermatid
Spermatid
The spermatid is the haploid male gametid that results from division of secondary spermatocytes. As a result of meiosis, each spermatid contains only half of the genetic material present in the original primary spermatocyte....
s via mitotic cell division
Cell division
Cell division is the process by which a parent cell divides into two or more daughter cells . Cell division is usually a small segment of a larger cell cycle. This type of cell division in eukaryotes is known as mitosis, and leaves the daughter cell capable of dividing again. The corresponding sort...
. In bryophyte
Bryophyte
Bryophyte is a traditional name used to refer to all embryophytes that do not have true vascular tissue and are therefore called 'non-vascular plants'. Some bryophytes do have specialized tissues for the transport of water; however since these do not contain lignin, they are not considered to be...
s, the antheridium is borne on an antheridiophore, a stalk-like structure that carries the antheridium at its apex.

In many gymnosperm
Gymnosperm
The gymnosperms are a group of seed-bearing plants that includes conifers, cycads, Ginkgo, and Gnetales. The term "gymnosperm" comes from the Greek word gymnospermos , meaning "naked seeds", after the unenclosed condition of their seeds...
s and all angiosperms, the male gametophytes have been reduced to pollen grains
Pollen
Pollen is a fine to coarse powder containing the microgametophytes of seed plants, which produce the male gametes . Pollen grains have a hard coat that protects the sperm cells during the process of their movement from the stamens to the pistil of flowering plants or from the male cone to the...
and their antheridia have been reduced to a single generative cell within the pollen grain. During pollination
Pollination
Pollination is the process by which pollen is transferred in plants, thereby enabling fertilisation and sexual reproduction. Pollen grains transport the male gametes to where the female gamete are contained within the carpel; in gymnosperms the pollen is directly applied to the ovule itself...
, this generative cell divides and gives rise to two sperm nuclei.

The female counterpart to the antheridium is the archegonium
Archegonium
An archegonium , from the ancient Greek ἀρχή and γόνος , is a multicellular structure or organ of the gametophyte phase of certain plants, producing and containing the ovum or female gamete. The archegonium has a long neck canal and a swollen base...
.
The source of this article is wikipedia, the free encyclopedia.  The text of this article is licensed under the GFDL.