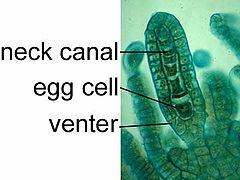 An archegonium from the ancient Greek
Ancient Greek
Ancient Greek is the stage of the Greek language in the periods spanning the times c. 9th–6th centuries BC, , c. 5th–4th centuries BC , and the c. 3rd century BC – 6th century AD of ancient Greece and the ancient world; being predated in the 2nd millennium BC by Mycenaean Greek...
ἀρχή ("beginning") and γόνος ("offspring"), is a multicellular structure or organ of the gametophyte
Gametophyte
A gametophyte is the haploid, multicellular phase of plants and algae that undergo alternation of generations, with each of its cells containing only a single set of chromosomes....
phase of certain plant
Plant
Plants are living organisms belonging to the kingdom Plantae. Precise definitions of the kingdom vary, but as the term is used here, plants include familiar organisms such as trees, flowers, herbs, bushes, grasses, vines, ferns, mosses, and green algae. The group is also called green plants or...
s, producing and containing the ovum
Ovum
An ovum is a haploid female reproductive cell or gamete. Both animals and embryophytes have ova. The term ovule is used for the young ovum of an animal, as well as the plant structure that carries the female gametophyte and egg cell and develops into a seed after fertilization...
or female gamete
Gamete
A gamete is a cell that fuses with another cell during fertilization in organisms that reproduce sexually...
. The archegonium has a long neck canal and a swollen base. Archegonia are typically located on the surface of the plant thallus, although in the hornwort
Hornwort
Hornworts are a group of bryophytes, or non-vascular plants, comprising the division Anthocerotophyta. The common name refers to the elongated horn-like structure, which is the sporophyte. The flattened, green plant body of a hornwort is the gametophyte plant.Hornworts may be found worldwide,...
s they are embedded.

In the moss
Moss
Mosses are small, soft plants that are typically 1–10 cm tall, though some species are much larger. They commonly grow close together in clumps or mats in damp or shady locations. They do not have flowers or seeds, and their simple leaves cover the thin wiry stems...
Physcomitrella patens
Physcomitrella patens
Physcomitrella patens is a moss used as a model organism for studies on plant evolution, development and physiology.-Model organism:...
, archegonia are not embedded but are located on top of the leafy gametophore
Gametophore
The word gametophore, also known as gametangiophore, is composed of gametangium and "phore" . In moss and fern the gametophore is the bearer of the sex organs , the female archegonia and the male antheridia. If the archegonia as well as the antheridia are arranged at the same plant, they are...
(s. Figure). The Polycomb protein FIE is expressed in the unfertilised egg cell (right) as the blue colour after GUS staining
GUS reporter system
The GUS reporter system is a reporter gene system, particularly useful in plant molecular biology. Several kinds of GUS reporter gene assay are actually available, depending on the substrate used...
reveals. Soon after fertilisation the FIE gene is inactivated (the blue colour is no longer visible, left) in the young embryo. 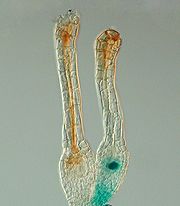 They are also much-reduced and embedded in the megagametophytes of gymnosperm
Gymnosperm
The gymnosperms are a group of seed-bearing plants that includes conifers, cycads, Ginkgo, and Gnetales. The term "gymnosperm" comes from the Greek word gymnospermos , meaning "naked seeds", after the unenclosed condition of their seeds...
s. The term is not used for angiosperms or the gnetophytes Gnetum
Gnetum
Gnetum is a genus of about 30-35 species of gymnosperms, the sole genus in the family Gnetaceae and order Gnetales. They are tropical evergreen trees, shrubs and lianas. Unlike other gymnosperms they possess vessel elements in the xylem...
and Welwitschia
Welwitschia
Welwitschia is a monotypic genus of gymnosperm plant, composed solely of the very distinct Welwitschia mirabilis. The plant is commonly simply known as Welwitschia in English. It is known locally as !kharos or khurub , tweeblaarkanniedood , nyanka , or onyanga , among others...
because the megagametophyte is reduced to just a few cells, one of which differentiates into the egg cell. The function of surrounding the gamete is assumed in large part by diploid cells of the megasporangium (nucellus) inside the ovule
Ovule
Ovule means "small egg". In seed plants, the ovule is the structure that gives rise to and contains the female reproductive cells. It consists of three parts: The integument forming its outer layer, the nucellus , and the megaspore-derived female gametophyte in its center...
. Gymnosperms have their archegonium formed after pollination
Pollination
Pollination is the process by which pollen is transferred in plants, thereby enabling fertilisation and sexual reproduction. Pollen grains transport the male gametes to where the female gamete are contained within the carpel; in gymnosperms the pollen is directly applied to the ovule itself...
inside female pine cones (megastrobili).

The corresponding male organ is called the antheridium
Antheridium
An antheridium or antherida is a haploid structure or organ producing and containing male gametes . It is present in the gametophyte phase of lower plants like mosses and ferns, and also in the primitive vascular psilotophytes...
.
The source of this article is wikipedia, the free encyclopedia.  The text of this article is licensed under the GFDL.