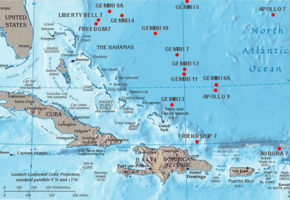 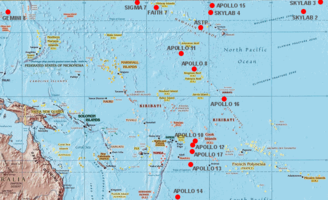 Splashdown is the method of landing
Landing
thumb|A [[Mute Swan]] alighting. Note the ruffled feathers on top of the wings indicate that the swan is flying at the [[Stall |stall]]ing speed...
a spacecraft by parachute
Parachute
A parachute is a device used to slow the motion of an object through an atmosphere by creating drag, or in the case of ram-air parachutes, aerodynamic lift. Parachutes are usually made out of light, strong cloth, originally silk, now most commonly nylon...
in a body of water. It was used by American manned spacecraft prior to the Space Shuttle program
Space Shuttle program
NASA's Space Shuttle program, officially called Space Transportation System , was the United States government's manned launch vehicle program from 1981 to 2011...
. It is also possible for the Russia
Russia
Russia or , officially known as both Russia and the Russian Federation , is a country in northern Eurasia. It is a federal semi-presidential republic, comprising 83 federal subjects...
n Soyuz spacecraft
Soyuz spacecraft
Soyuz , Union) is a series of spacecraft initially designed for the Soviet space programme by the Korolyov Design Bureau in the 1960s, and still in service today...
and Chinese
People's Republic of China
China , officially the People's Republic of China , is the most populous country in the world, with over 1.3 billion citizens. Located in East Asia, the country covers approximately 9.6 million square kilometres...
Shenzhou spacecraft
Shenzhou spacecraft
Shenzhou is a spacecraft developed and operated by the People's Republic of China to support its manned spaceflight program. The name is variously translated as "Divine Craft," "Divine Vessel of God," "Magic Boat" or similar and is also homophonous with an ancient name for China...
to land in water, though this is only a contingency. The only example of an (unintentional) splashdown in Soviet history is the Soyuz 23
Soyuz 23
Soyuz 23 was a 1976 Soviet manned space flight, the second to the Salyut 5 space station. Cosmonauts Vyacheslav Zudov and Valery Rozhdestvensky arrived at the station, but an equipment malfunction did not allow docking and the mission had to be aborted....
landing.

As the name suggests, the capsule parachute
Parachute
A parachute is a device used to slow the motion of an object through an atmosphere by creating drag, or in the case of ram-air parachutes, aerodynamic lift. Parachutes are usually made out of light, strong cloth, originally silk, now most commonly nylon...
s into an ocean
Ocean
An ocean is a major body of saline water, and a principal component of the hydrosphere. Approximately 71% of the Earth's surface is covered by ocean, a continuous body of water that is customarily divided into several principal oceans and smaller seas.More than half of this area is over 3,000...
or other large body of water. The properties of water cushion the spacecraft enough that there is no need for a braking rocket to slow the final descent as was the case with Russian and Chinese manned space capsules, which returned to Earth over land. The American practice came in part because American launch sites are on the coastline and launch primarily over water. Russian and Chinese launch sites are far inland and most early launch aborts were likely to descend on land.

The splashdown method of landing was utilized for Mercury
Mercury program
Mercury Program might refer to:*the first successful American manned spaceflight program, Project Mercury*an American post-rock band, The Mercury Program...
, Gemini and Apollo (including Skylab
Skylab
Skylab was a space station launched and operated by NASA, the space agency of the United States. Skylab orbited the Earth from 1973 to 1979, and included a workshop, a solar observatory, and other systems. It was launched unmanned by a modified Saturn V rocket, with a mass of...
, which used Apollo capsules). On one occasion a Soviet spacecraft, Soyuz 23
Soyuz 23
Soyuz 23 was a 1976 Soviet manned space flight, the second to the Salyut 5 space station. Cosmonauts Vyacheslav Zudov and Valery Rozhdestvensky arrived at the station, but an equipment malfunction did not allow docking and the mission had to be aborted....
, punched through the ice of a frozen lake (nearly killing the cosmonauts), and this was unintentional.

On early Mercury flights, a helicopter attached a cable to the capsule, lifted it from the water and delivered it to a nearby ship. This was changed after the sinking of Liberty Bell 7. All later Mercury, Gemini and Apollo capsules had a flotation collar (similar to a rubber life raft) attached to the spacecraft to increase their buoyancy. The spacecraft would then be brought alongside a ship and lifted onto deck by crane.

After the flotation collar is attached, a hatch on the spacecraft is usually opened. At that time, some astronauts decide to be hoisted aboard a helicopter for a ride to the recovery ship and some decided to stay with the spacecraft and be lifted aboard ship via crane. (Because of his overshoot aboard Aurora 7, and mindful of the fate of Liberty Bell 7, Scott Carpenter
Scott Carpenter
Malcolm Scott Carpenter is an American engineer, former test pilot, astronaut, and aquanaut. He is best known as one of the original seven astronauts selected for NASA's Project Mercury in April 1959....
alone egressed through the nose of his capsule instead of through the hatch, waiting for recovery forces in his life raft.) All Gemini and Apollo flights (Apollos 7 to 17) used the former, while Mercury missions from Mercury 6 to Mercury 9, as well as all Skylab missions and Apollo-Soyuz used the latter, especially the Skylab flights as to preserve all medical data. During the Gemini and Apollo programs, NASA used MV Retriever
MV Retriever
Motor Vessel Retriever was a World War II-era tank landing craft transferred to NASA from the U.S. Navy. It was used to train United States astronauts for post-splashdown ocean recovery operations and water egress from their command modules during the Gemini and Apollo programs from 1963 into the...
for the astronauts to practice water egress.

While the water the spacecraft landed on would cushion it to a degree, the impact could still be quite violent for the astronaut
Astronaut
An astronaut or cosmonaut is a person trained by a human spaceflight program to command, pilot, or serve as a crew member of a spacecraft....
s.

There are several disadvantages for splashdowns, foremost among them being the danger of the spacecraft flooding and sinking. This happened to Gus Grissom
Gus Grissom
Virgil Ivan Grissom , , better known as Gus Grissom, was one of the original NASA Project Mercury astronauts and a United States Air Force pilot...
when the hatch of his Mercury-Redstone 4
Mercury-Redstone 4
Mercury-Redstone 4 was the second United States manned space mission, launched on July 21, 1961. The Mercury program suborbital flight used a Redstone rocket. The spacecraft was named Liberty Bell 7 piloted by astronaut Virgil I. "Gus" Grissom. It reached an altitude of more than 118.26 mi ...
capsule malfunctioned and blew prematurely. The capsule sank and Grissom nearly drowned.

Another problem associated with splashdown is that if the capsule comes down far from any recovery forces the crew are exposed to greater danger. As an example, Scott Carpenter in Mercury 7
Mercury-Atlas 7
-Backup crew:-Crew notes:The original prime crew for Mercury Atlas-7 was to have been Deke Slayton, with Schirra as his back-up. However Slayton was removed from all flight crew availability after the discovery of cardiac arrhythmia during a training run in the g-loading centrifuge...
overshot the assigned landing zone by 400 km. These recovery operation mishaps can be mitigated by placing several vessels on standby in several different locations, but this is quite an expensive option.