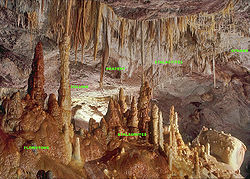 A speleothem commonly known as a cave formation, is a secondary mineral deposit formed in a cave
Cave
A cave or cavern is a natural underground space large enough for a human to enter. The term applies to natural cavities some part of which is in total darkness. The word cave also includes smaller spaces like rock shelters, sea caves, and grottos.Speleology is the science of exploration and study...
. Speleothems are typically formed in limestone
Limestone
Limestone is a sedimentary rock composed largely of the minerals calcite and aragonite, which are different crystal forms of calcium carbonate . Many limestones are composed from skeletal fragments of marine organisms such as coral or foraminifera....
or dolostone
Dolostone
Dolostone or dolomite rock is a sedimentary carbonate rock that contains a high percentage of the mineral dolomite. In old U.S.G.S. publications it was referred to as magnesian limestone. Most dolostone formed as a magnesium replacement of limestone or lime mud prior to lithification. It is...
solutional caves.

Water seeping through cracks in a cave's surrounding bedrock may dissolve certain compounds, usually calcite
Calcite
Calcite is a carbonate mineral and the most stable polymorph of calcium carbonate . The other polymorphs are the minerals aragonite and vaterite. Aragonite will change to calcite at 380-470°C, and vaterite is even less stable.-Properties:...
and aragonite
Aragonite
Aragonite is a carbonate mineral, one of the two common, naturally occurring, crystal forms of calcium carbonate, CaCO3...
(both calcium carbonate
Calcium carbonate
Calcium carbonate is a chemical compound with the formula CaCO3. It is a common substance found in rocks in all parts of the world, and is the main component of shells of marine organisms, snails, coal balls, pearls, and eggshells. Calcium carbonate is the active ingredient in agricultural lime,...
), or gypsum
Gypsum
Gypsum is a very soft sulfate mineral composed of calcium sulfate dihydrate, with the chemical formula CaSO4·2H2O. It is found in alabaster, a decorative stone used in Ancient Egypt. It is the second softest mineral on the Mohs Hardness Scale...
(calcium sulfate
Calcium sulfate
Calcium sulfate is a common laboratory and industrial chemical. In the form of γ-anhydrite , it is used as a desiccant. It is also used as a coagulant in products like tofu. In the natural state, unrefined calcium sulfate is a translucent, crystalline white rock...
). The rate depends on the amount of carbon dioxide held in solution, on temperature, and on other factors. When the solution reaches an air-filled cave, a discharge of carbon dioxide may alter the water's ability to hold these minerals in solution, causing its solutes to precipitate
Precipitation (chemistry)
Precipitation is the formation of a solid in a solution or inside anothersolid during a chemical reaction or by diffusion in a solid. When the reaction occurs in a liquid, the solid formed is called the precipitate, or when compacted by a centrifuge, a pellet. The liquid remaining above the solid...
. Over time, which may span tens of thousands of years, the accumulation of these precipitates may form speleothems.

Speleothems take various forms, depending on whether the water drips, seeps, condenses, flows, or ponds. Many speleothems are named for their resemblance to man-made or natural objects. Types of speleothems include:

Speleothems may also occur in lava tubes. Although sometimes similar in appearance to speleothems in caves formed by dissolution, these are formed by the cooling of residual lava within the lava tube.

Speleothems formed from salt, sulfur and other minerals are also known.

Speleothems made of pure calcium carbonate are a translucent white color, but often speleothems are colored by minerals such as iron
Iron
Iron is a chemical element with the symbol Fe and atomic number 26. It is a metal in the first transition series. It is the most common element forming the planet Earth as a whole, forming much of Earth's outer and inner core. It is the fourth most common element in the Earth's crust...
, copper
Copper
Copper is a chemical element with the symbol Cu and atomic number 29. It is a ductile metal with very high thermal and electrical conductivity. Pure copper is soft and malleable; an exposed surface has a reddish-orange tarnish...
or manganese
Manganese
Manganese is a chemical element, designated by the symbol Mn. It has the atomic number 25. It is found as a free element in nature , and in many minerals...
, or may be brown because of mud and silt particulate inclusions.

Many factors impact the shape and color of speleothem formations including the rate and direction of water seepage, the amount of acid in the water, the temperature and humidity content of a cave, air currents, the above ground climate, the amount of annual rainfall and the density of the plant cover. Most cave chemistry revolves around calcite
Calcite
Calcite is a carbonate mineral and the most stable polymorph of calcium carbonate . The other polymorphs are the minerals aragonite and vaterite. Aragonite will change to calcite at 380-470°C, and vaterite is even less stable.-Properties:...
; CaCO3, the primary mineral in limestone
Limestone
Limestone is a sedimentary rock composed largely of the minerals calcite and aragonite, which are different crystal forms of calcium carbonate . Many limestones are composed from skeletal fragments of marine organisms such as coral or foraminifera....
. It is a slightly soluble mineral whose solubility
Solubility
Solubility is the property of a solid, liquid, or gaseous chemical substance called solute to dissolve in a solid, liquid, or gaseous solvent to form a homogeneous solution of the solute in the solvent. The solubility of a substance fundamentally depends on the used solvent as well as on...
increases with the introduction of carbon dioxide
Carbon dioxide
Carbon dioxide is a naturally occurring chemical compound composed of two oxygen atoms covalently bonded to a single carbon atom...
, CO2. It is paradoxical in that its solubility decreases as the temperature increases, unlike the vast majority of dissolved solids. This decrease is due to interactions with the carbon dioxide, whose solubility is diminished by elevated temperatures; as the carbon dioxide is released, the calcium carbonate is precipitated.

Most other solution caves that are not composed of limestone or dolostone are composed of gypsum (calcium sulfate), the solubility of which is positively correlated with temperature.

Samples can be taken from speleothems to be used like ice core
Ice core
An ice core is a core sample that is typically removed from an ice sheet, most commonly from the polar ice caps of Antarctica, Greenland or from high mountain glaciers elsewhere. As the ice forms from the incremental build up of annual layers of snow, lower layers are older than upper, and an ice...
s as a proxy
Proxy (climate)
In the study of past climates is known as paleoclimatology, climate proxies are preserved physical characteristics of the past that stand in for direct measurements , to enable scientists to reconstruct the climatic conditions that prevailed during much of the Earth's history...
record of past climate changes.
A particular strength of speleothems in this regard is their unique ability to be accurately dated over much of the late Quaternary
Quaternary
The Quaternary Period is the most recent of the three periods of the Cenozoic Era in the geologic time scale of the ICS. It follows the Neogene Period, spanning 2.588 ± 0.005 million years ago to the present...
period using the uranium-thorium dating
Uranium-thorium dating
Uranium-thorium dating, also called thorium-230 dating, uranium-series disequilibrium dating or uranium-series dating, is a radiometric dating technique commonly used to determine the age of calcium carbonate materials such as speleothem or coral...
technique. Stalagmites are particularly useful for palaeoclimate applications because of their relatively simple geometry and because they contain several different climate records, such as oxygen and carbon isotopes and trace cations. These can provide clues to past precipitation, temperature, and vegetation changes over the last ~ 500,000 years.

Another dating method using electron spin resonance (ESR) — also known as electron paramagnetic resonance
Electron paramagnetic resonance
Electron paramagnetic resonance or electron spin resonance spectroscopyis a technique for studying chemical species that have one or more unpaired electrons, such as organic and inorganic free radicals or inorganic complexes possessing a transition metal ion...
(EPR) — is based on the measurement of electron-hole centers accumulated with time in the crystal lattice of CaCO3 exposed to natural radiations. In principle, in the more favorable cases, and assuming some simplifying hypotheses, the age of a speleothem could be derived from the total radiation dose cumulated by the sample and the annual dose rate to which it was exposed. Unfortunately, not all the samples are suited for ESR dating: indeed, the presence of cationic impurities such as Mn2+, Fe2+, or Fe3+, humic acids (organic matter), can mask the signal of interest, or interfere with it. Moreover, the radiation centers must be stable on geologic time, i.e., to have a very large lifetime, to make dating possible. Many other artifacts, such as, e.g., surface defects induced by the grinding of the sample can also preclude a correct dating. Only a few percents of the samples tested are in fact suitable for dating. This makes the technique often disappointing for the experimentalists. One of the main challenge of the technique is the correct identification of the radiation-induced centers and their great variety related to the nature and the variable concentration of the impurities present in the crystal lattice of the sample. ESR dating can be tricky and must be applied with discernment. It can never be used alone: "One date only is No date", or in other words, "multiple lines of evidence and multiple lines of reasoning are necessary in absolute dating". However, "good samples" might be found if all the selection criteria are met.