Encyclopedia
Precipitation is the formation of a solid
Solid
Solid is one of the three classical states of matter . It is characterized by structural rigidity and resistance to changes of shape or volume. Unlike a liquid, a solid object does not flow to take on the shape of its container, nor does it expand to fill the entire volume available to it like a...
in a solution
Solution
In chemistry, a solution is a homogeneous mixture composed of only one phase. In such a mixture, a solute is dissolved in another substance, known as a solvent. The solvent does the dissolving.- Types of solutions :...
or inside another
solid during a chemical reaction
Chemical reaction
A chemical reaction is a process that leads to the transformation of one set of chemical substances to another. Chemical reactions can be either spontaneous, requiring no input of energy, or non-spontaneous, typically following the input of some type of energy, such as heat, light or electricity...
or by diffusion
Diffusion
Molecular diffusion, often called simply diffusion, is the thermal motion of all particles at temperatures above absolute zero. The rate of this movement is a function of temperature, viscosity of the fluid and the size of the particles...
in a solid. When the reaction occurs in a liquid, the solid formed is called the precipitate, or when compacted by a centrifuge
Laboratory centrifuge
A laboratory centrifuge is a piece of laboratory equipment, driven by a motor, which spins liquid samples at high speed.There are various types of centrifuges, depending on the size and the sample capacity....
, a pellet. The liquid remaining above the solid is in either case called the supernate or supernatant. Powders derived from precipitation have also historically
History of chemistry
By 1000 BC, ancient civilizations used technologies that would eventually form the basis of the various branches of chemistry. Examples include extracting metals from ores, making pottery and glazes, fermenting beer and wine, making pigments for cosmetics and painting, extracting chemicals from...
been known as flowers.

Natural methods of precipitate include settling
Settling
Settling is the process by which particulates settle to the bottom of a liquid and form a sediment. Particles that experience a force, either due to gravity or due to centrifugal motion will tend to move in a uniform manner in the direction exerted by that force...
or sediment
Sediment
Sediment is naturally occurring material that is broken down by processes of weathering and erosion, and is subsequently transported by the action of fluids such as wind, water, or ice, and/or by the force of gravity acting on the particle itself....
ation, where a solid forms over a period of time due to ambient forces like gravity or centrifugation
Centrifugation
Centrifugation is a process that involves the use of the centrifugal force for the sedimentation of mixtures with a centrifuge, used in industry and in laboratory settings. More-dense components of the mixture migrate away from the axis of the centrifuge, while less-dense components of the mixture...
. During chemical reactions, precipitation may also occur particularly if an insoluble
Solubility
Solubility is the property of a solid, liquid, or gaseous chemical substance called solute to dissolve in a solid, liquid, or gaseous solvent to form a homogeneous solution of the solute in the solvent. The solubility of a substance fundamentally depends on the used solvent as well as on...
substance is introduced into a solution and the density happens to be greater (otherwise the precipitate would float or form a suspension
Suspension (chemistry)
In chemistry, a suspension is a heterogeneous fluid containing solid particles that are sufficiently large for sedimentation. Usually they must be larger than 1 micrometer. The internal phase is dispersed throughout the external phase through mechanical agitation, with the use of certain...
). With soluble substances, precipitation is accelerated once the solution becomes supersaturated.

In solids, precipitation occurs if the concentration of one solid is above the solubility limit in the host solid, due to e.g. rapid quenching or
ion implantation
Ion implantation
Ion implantation is a materials engineering process by which ions of a material are accelerated in an electrical field and impacted into another solid. This process is used to change the physical, chemical, or electrical properties of the solid...
, and the temperature is high enough that diffusion can lead to segregation into precipitates. Precipitation in solids is routinely used to synthesize nanoclusters
.

An important stage of the precipitation process is the onset of nucleation
Nucleation
Nucleation is the extremely localized budding of a distinct thermodynamic phase. Some examples of phases that may form by way of nucleation in liquids are gaseous bubbles, crystals or glassy regions. Creation of liquid droplets in saturated vapor is also characterized by nucleation...
. The creation of a hypothetical solid particle includes the formation of an interface
Interface (chemistry)
An interface is a surface forming a common boundary among two different phases, such as an insoluble solid and a liquid, two immiscible liquids or a liquid and an insoluble gas. The importance of the interface depends on which type of system is being treated: the bigger the quotient area/volume,...
, which requires some energy based on the relative surface energy
Surface energy
Surface energy quantifies the disruption of intermolecular bonds that occur when a surface is created. In the physics of solids, surfaces must be intrinsically less energetically favorable than the bulk of a material, otherwise there would be a driving force for surfaces to be created, removing...
of the solid and the solution. If this energy is not available, and no suitable nucleation surface is available, supersaturation occurs. 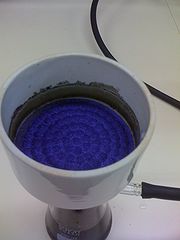 Precipitation is also useful to isolate the products of a reaction during workup. Ideally, the product of the reaction is insoluble in the reaction solvent. Thus, it precipitates as it is formed, preferably forming pure crystals
Crystallization
Crystallization is the process of formation of solid crystals precipitating from a solution, melt or more rarely deposited directly from a gas. Crystallization is also a chemical solid–liquid separation technique, in which mass transfer of a solute from the liquid solution to a pure solid...
. An example of this would be the synthesis of porphyrin
Porphyrin
Porphyrins are a group of organic compounds, many naturally occurring. One of the best-known porphyrins is heme, the pigment in red blood cells; heme is a cofactor of the protein hemoglobin. Porphyrins are heterocyclic macrocycles composed of four modified pyrrole subunits interconnected at...
s in refluxing propionic acid
Propionic acid
Propanoic acid is a naturally occurring carboxylic acid with chemical formula CH3CH2COOH. It is a clear liquid with a pungent odor...
. By cooling the reaction mixture to room temperature, crystals of the porphyrin precipitate, and are collected by filtration:

Precipitation may also occur when an antisolvent (a solvent in which the product is insoluble) is added, drastically reducing the solubility of the desired product. Thereafter, the precipitate may easily be separated by filtration
Filtration
Filtration is commonly the mechanical or physical operation which is used for the separation of solids from fluids by interposing a medium through which only the fluid can pass...
, decanting, or centrifugation
Centrifugation
Centrifugation is a process that involves the use of the centrifugal force for the sedimentation of mixtures with a centrifuge, used in industry and in laboratory settings. More-dense components of the mixture migrate away from the axis of the centrifuge, while less-dense components of the mixture...
). An example would be the synthesis of chromic tetraphenylporphyrin chloride: water is added to the DMF reaction solution, and the product precipitates. Precipitation is also useful in purifying products: crude bmim-Cl is taken up in acetonitrile
Acetonitrile
Acetonitrile is the chemical compound with formula . This colourless liquid is the simplest organic nitrile. It is produced mainly as a byproduct of acrylonitrile manufacture...
, and dropped into ethyl acetate, where it precipitates.

In metallurgy
Metallurgy
Metallurgy is a domain of materials science that studies the physical and chemical behavior of metallic elements, their intermetallic compounds, and their mixtures, which are called alloys. It is also the technology of metals: the way in which science is applied to their practical use...
, precipitation from a solid solution
Solid solution
A solid solution is a solid-state solution of one or more solutes in a solvent. Such a mixture is considered a solution rather than a compound when the crystal structure of the solvent remains unchanged by addition of the solutes, and when the mixture remains in a single homogeneous phase...
is also a useful way to strengthen alloy
Precipitation strengthening
Precipitation hardening, also called age hardening, is a heat treatment technique used to increase the yield strength of malleable materials, including most structural alloys of aluminium, magnesium, nickel and titanium, and some stainless steels...
s; this process is known as solid solution strengthening
Solid solution strengthening
Solid solution strengthening is a type of alloying that can be used to improve the strength of a pure metal. The technique works by adding atoms of one element to the crystalline lattice of another element . The alloying element diffuses into the matrix, forming a solid solution...
.

An example of a precipitation reaction: Aqueous silver nitrate
Silver nitrate
Silver nitrate is an inorganic compound with chemical formula . This compound is a versatile precursor to many other silver compounds, such as those used in photography. It is far less sensitive to light than the halides...
(AgNO3) is added to a solution containing potassium chloride
Potassium chloride
The chemical compound potassium chloride is a metal halide salt composed of potassium and chlorine. In its pure state, it is odorless and has a white or colorless vitreous crystal appearance, with a crystal structure that cleaves easily in three directions. Potassium chloride crystals are...
(KCl), the precipitation of a white solid, silver chloride
Silver chloride
Silver chloride is a chemical compound with the chemical formula AgCl. This white crystalline solid is well known for its low solubility in water . Upon illumination or heating, silver chloride converts to silver , which is signalled by greyish or purplish coloration to some samples...
is observed. (Zumdahl, 2005)

The silver chloride (AgCl) has formed a solid, which is observed as a precipitate.

This reaction can be written emphasizing the dissociated
Dissociation
Dissociation is an altered state of consciousness characterized by partial or complete disruption of the normal integration of a person’s normal conscious or psychological functioning. Dissociation is most commonly experienced as a subjective perception of one's consciousness being detached from...
ions in a combined solution. This is known as the ionic equation.

A final way to represent a precipitate reaction is known as a net ionic reaction. In this case, any spectator ions (those that do not contribute to the reaction) are left out of the formula completely. This simplifies the above equations to the following:

Precipitate formation is useful in the detection of the type of cation in salt
Salt
In chemistry, salts are ionic compounds that result from the neutralization reaction of an acid and a base. They are composed of cations and anions so that the product is electrically neutral...
. To do this, an alkali
Alkali
In chemistry, an alkali is a basic, ionic salt of an alkali metal or alkaline earth metal element. Some authors also define an alkali as a base that dissolves in water. A solution of a soluble base has a pH greater than 7. The adjective alkaline is commonly used in English as a synonym for base,...
first reacts with the unknown salt to produce a precipitate that is the hydroxide
Hydroxide
Hydroxide is a diatomic anion with chemical formula OH−. It consists of an oxygen and a hydrogen atom held together by a covalent bond, and carrying a negative electric charge. It is an important but usually minor constituent of water. It functions as a base, as a ligand, a nucleophile, and a...
of the unknown salt. To identify the cation, the color of the precipitate and its solubility in excess are noted. Similar processes are often used to separate chemically similarly.