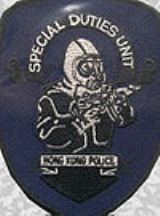 Encyclopedia
The Special Duties Unit is an elite paramilitary
Paramilitary
A paramilitary is a force whose function and organization are similar to those of a professional military, but which is not considered part of a state's formal armed forces....
tactical unit of the Hong Kong Police Force
Hong Kong Police Force
The Hong Kong Police Force is the largest disciplined service under the Security Bureau of Hong Kong. It is the world's second, and Asia's first, police agency to operate with a modern policing system. It was formed on 1 May 1844, with a strength of 32 officers...
. Established in July 1974, it is a sub-division of the Police Tactical Unit
Police Tactical Unit (Hong Kong)
The Police Tactical Unit is a paramilitary riot control unit of the Hong Kong Police Force. The Police Tactical Unit provides an immediate manpower reserve for use in any emergency, Unit companies are attached to all land Regions and are available for internal security, crowd control, anti-crime...
(PTU). Its primary functions include counter-terrorism
Counter-terrorism
Counter-terrorism is the practices, tactics, techniques, and strategies that governments, militaries, police departments and corporations adopt to prevent or in response to terrorist threats and/or acts, both real and imputed.The tactic of terrorism is available to insurgents and governments...
, hostage rescue and dealing with crimes (usually involving firearms) which are considered too dangerous for regular police to handle. The unit was formerly trained by the British SAS
Special Air Service
Special Air Service or SAS is a corps of the British Army constituted on 31 May 1950. They are part of the United Kingdom Special Forces and have served as a model for the special forces of many other countries all over the world...
before the handover of Hong Kong to China.

The SDU is based in Fanling.

The establishment of the Special Duties Unit can be traced back to an incident on March 13, 1971, when a Philippine Airlines
Philippine Airlines
Philippine Airlines, Inc. operating as Philippine Airlines, is a flag carrier of the Philippines. Headquartered in the Philippine National Bank Financial Center in Pasay City, the airline was founded in 1941 and is the first and oldest commercial airline in Asia operating under its original name...
flight was hijacked
Aircraft hijacking
Aircraft hijacking is the unlawful seizure of an aircraft by an individual or a group. In most cases, the pilot is forced to fly according to the orders of the hijackers. Occasionally, however, the hijackers have flown the aircraft themselves, such as the September 11 attacks of 2001...
and was forced to land at Kai Tak Airport
Kai Tak Airport
Kai Tak Airport was the international airport of Hong Kong from 1925 until 1998. It was officially known as the Hong Kong International Airport from 1954 to 6 July 1998, when it was closed and replaced by the new Hong Kong International Airport at Chek Lap Kok, 30 km to the west...
. Though the incident was resolved peacefully, the Hong Kong Police Force
Hong Kong Police Force
The Hong Kong Police Force is the largest disciplined service under the Security Bureau of Hong Kong. It is the world's second, and Asia's first, police agency to operate with a modern policing system. It was formed on 1 May 1844, with a strength of 32 officers...
became concerned that a similar incident would occur in the future. The Sharpshooter Team (神槍手隊) was assembled in 1974 and later reorganised into the Special Duties Unit.

In addition, Special Boat Service
Special Boat Service
The Special Boat Service is the special forces unit of the British Royal Navy. Together with the Special Air Service, Special Reconnaissance Regiment and the Special Forces Support Group they form the United Kingdom Special Forces and come under joint control of the same Director Special...
personnel assisted the SDU in developing its own marine counter-terrorist unit, the Water Team, (nicknamed: "Water Ghosts" 水鬼隊 ) after an incident in the early 1980s. A Water Ghosts sniper
Sniper
A sniper is a marksman who shoots targets from concealed positions or distances exceeding the capabilities of regular personnel. Snipers typically have specialized training and distinct high-precision rifles....
named Tsang Kwong-biu was seriously injured while undergoing joint training with SEAL Team Six in 1991, during a ship-boarding exercise when a four-inch diameter steel cable suddenly snapped before he fell down 30 feet to the boat. The Water Team was later disbanded in 2000, because all current officers of the Special Duties Unit are equally trained and proficient in maritime operations.

The Special Duties Unit consists of a support group, administration group and the action group. The action group is the core of the Unit, further categorised into the assault team and the sniper team. The following units include:

To maintain the SDU's high standards, recruitment exercises are not open to the general public. To even qualify for recruitment, one must have a minimum of two years service in the Police Tactical Unit
Police Tactical Unit (Hong Kong)
The Police Tactical Unit is a paramilitary riot control unit of the Hong Kong Police Force. The Police Tactical Unit provides an immediate manpower reserve for use in any emergency, Unit companies are attached to all land Regions and are available for internal security, crowd control, anti-crime...
and complete training under the PTU, and to be both a non-smoker and non-drinker. The selection process is very stringent, with a high drop-out rate; only about 100 are selected to enlist in the SDU. The SDU's training program has been merged with the ASU
Airport Security Unit (Hong Kong)
The Airport Security Unit formed in 1977, is a special force of the Hong Kong Police Force tasked with the security of the Hong Kong International Airport....
recently to prevent potential candidates from dropping out from either unit.

The officers in the unit maintain a high degree of secrecy and only the closest family members know their true identity.

The SDU does not enforce a retirement age, due to the unit's emphasis on overall personal capability rather than physical prowess alone; an officer only retires when he wishes to resign or has become incapable of fulfilling his duties. At their retirement, they are paid a lump sum of Hong Kong dollar (HK) $2,000,000 and would still receive a monthly pension thereafter.

The Special Duties Unit has been known to be armed or formerly armed with the following weapons and equipment:

AR-15
AR-15
The AR-15 is a lightweight, 5.56 mm, air-cooled, gas-operated, magazine-fed semi-automatic rifle, with a rotating-lock bolt, actuated by direct impingement gas operation. It is manufactured with the extensive use of aluminum alloys and synthetic materials....
(Early 70s - early 80s)

M4A1
M4 Carbine
The M4 carbine is a family of firearms tracing its lineage back to earlier carbine versions of the M16, all based on the original AR-15 designed by Eugene Stoner and made by ArmaLite. It is a shorter and lighter variant of the M16A2 assault rifle, with 80% parts commonality.It is a gas-operated,...
(2001–present)

Remington 870
Remington 870
The Remington Model 870 is a U.S.-made pump-action shotgun manufactured by Remington Arms Company, Inc. It is widely used by the public for sport shooting, hunting, and self-defense. It is also commonly used by law enforcement and military organizations worldwide.-Development:The Remington 870 was...
(Early 80s - present)

Benelli M1 Super 90
Benelli M1 Super 90
The Benelli M1 is a semi-automatic shotgun manufactured by Benelli Armi S.P.A.. It is available in several versions for civilian, law enforcement and military use. It features the proprietary Benelli recoil system, known for its reliability and easy maintenance...
(Early 80s - present)

SR-25
SR-25
The SR-25 is a semi-automatic sniper rifle designed by Eugene Stoner and manufactured by Knight's Armament Company. The SR-25 uses a rotating bolt and a direct impingement gas system. It is loosely based on Stoner's AR-10, rebuilt in its original 7.62×51mm NATO caliber...
(Late 90s - present)

During a bank robbery in 1992, four robbers with AK-47 assault rifles and hand-grenades battled the SDU, resulting in 7 officers injured. As a result of this incident, their Close Quarters Battle
Close quarters battle
Close quarters combat or close quarters battle is a type of fighting in which small units engage the enemy with personal weapons at very short range, potentially to the point of hand-to-hand combat or fighting with hand weapons such as swords or knives...
technique was further refined in order to fit Hong Kong's unique urban environment, and new equipment was added to the Unit's arsenal
Arsenal
An arsenal is a place where arms and ammunition are made, maintained and repaired, stored, issued to authorized users, or any combination of those...
. All suspects were apprehended.

Before Christmas Eve of 2003, Kwai Ping Hung, the most wanted person in Hong Kong, was arrested in a joint raid between the Special Duties Unit and Criminal Intelligence Bureau (Team D) (Hit Team) with no shots fired. 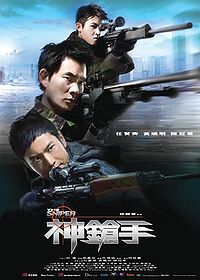 The Special Duties Unit rarely appeared in the mass media, and there were some movies or television programmes dedicated to them. Also, the unit was featured occasionally as part of films typically of the action genre: