Can i shoot any 12 guage ammo trough it

I have an 870 special with the 21in barrel and was wondering if a longer barrel for the wingmaster or express would fit mine.

Has anyone installed a Timney 'Trigger Fix' or Accuracy Speaks Trigger Kit? What is your evaluation of improvement over 'sloppy' factory trigger? Was...

I took apart my old 870 to install a composite stock and fore-end. I'm having issues tightening up the fore end nut, would anyone know where to find f...
More

What's the best type stock for a 870 tactical type shotgun?

Is it safe to shoot slugs trough a regular barrel

My 870 has a riffeled barral, so I bought the sabots plastic heads expensive per box. This ammunition is not consistant. I was told not to use the re...
More

Encyclopedia
The Remington Model 870 is a U.S.
United States
The United States of America is a federal constitutional republic comprising fifty states and a federal district...
-made pump-action shotgun manufactured by Remington Arms Company, Inc.
Remington Arms
Remington Arms Company, Inc. was founded in 1816 by Eliphalet Remington in Ilion, New York, as E. Remington and Sons. It is the oldest company in the United States which still makes its original product, and is the oldest continuously operating manufacturer in North America. It is the only U.S....
It is widely used by the public for sport shooting, hunting, and self-defense. It is also commonly used by law enforcement and military organizations worldwide.

The Remington 870 was the fourth major design in a series of Remington pump shotguns. John Pedersen designed the fragile Remington Model 10
Remington Model 10
The Remington Model 10 is a pump-action shotgunwith an internal hammer and tube magazine. It was offered in 12 gauge with barrel lengths from 20 to 32 inches .-Military use:...
(and later the improved Remington Model 29). Working with John Browning
John Browning
John Moses Browning , born in Ogden, Utah, was an American firearms designer who developed many varieties of military and civilian firearms, cartridges, and gun mechanisms, many of which are still in use around the world...
, Pedersen also helped design the Model 17
Remington Model 17
In 1915 John Browning patented a pump action, hammerless, under-loading, tubular-magazine, bottom-ejecting, take-down shotgun which became the Remington Model 17. The manufacturing rights were sold to Remington Arms shortly after, but due to the production efforts of World War I, Remington was...
which was adopted by Ithaca as the Ithaca 37
Ithaca 37
The Ithaca 37 is a pump-action shotgun made in large numbers for the civilian, military, and police markets. It utilizes a novel combination ejection/loading port on the bottom of the gun which leaves the sides closed to the elements. In addition, the outline of the gun is clean...
and also served as the basis for the Remington 31
Remington model 31
The Remington Model 31 was a slide-action shotgun that competed with the Winchester Model 1912 for the American sporting arms market. Produced from 1931 to 1949, it superseded the John Pedersen-designed Model 10 and Model 17 and was replaced by the less expensive Remington 870.-History:While the...
. The Model 31 was well liked, but struggled for sales in the shadow of the Winchester Model 12
Winchester Model 1912
The Winchester Model 1912 is a hammerless slide-action, i.e., pump-action, shotgun with an external tube magazine. Popularly-named the Perfect Repeater at its introduction, it largely set the standard for pump action shotguns over its 51 year high-rate production life...
. Remington sought to correct that in 1950 by introducing a modern, streamlined, rugged, reliable, and relatively inexpensive shotgun - the 870 Wingmaster.

Sales of the 870 have been steady. They reached 2 million guns by 1973 (ten times the number of Model 31 shotguns it replaced). By 1996, spurred by the basic "Express" model, sales topped seven million guns. On April 13, 2009 the ten millionth Model 870 was produced, and the 870 holds the record for best-selling shotgun in the history of the world.

The original 870 models were offered with fixed chokes. In 1986 Remington introduced the new Remington "Rem Choke" system of screw-in chokes (also fitted to Remington model 1100 auto-loading shotguns at the same time). Initially, the Rem Chokes were offered on barrel lengths of 21, 26 and 28". It was not offered on 30" barrels, deer guns, target guns or as a retrofit.

Early production 870s had a design flaw whereby a user could either "short stroke" the action - not pull the forearm all the way back while cycling the action - or fail to press a shell all the way into the magazine when loading. This would cause the gun's action to bind, requiring rough treatment of the action or even disassembly to clear. The issue was resolved with the introduction of the "Flexi Tab" carrier. Guns with this modification can be identified by the "U"-shaped cut-out on the carrier, visible from below the gun. The cut-out allows the round to ride over the carrier without binding the action.

There are hundreds of variations of the Remington 870. From the original fifteen models offered, Remington currently produces dozens of models for civilian, law enforcement, and military sales. 870 variants can be grouped into: 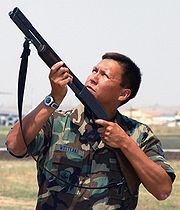