Encyclopedia
South Yarra is a suburb in Melbourne
Melbourne
Melbourne is the capital and most populous city in the state of Victoria, and the second most populous city in Australia. The Melbourne City Centre is the hub of the greater metropolitan area and the Census statistical division—of which "Melbourne" is the common name. As of June 2009, the greater...
, Victoria
Victoria (Australia)
Victoria is the second most populous state in Australia. Geographically the smallest mainland state, Victoria is bordered by New South Wales, South Australia, and Tasmania on Boundary Islet to the north, west and south respectively....
, Australia
Australia
Australia , officially the Commonwealth of Australia, is a country in the Southern Hemisphere comprising the mainland of the Australian continent, the island of Tasmania, and numerous smaller islands in the Indian and Pacific Oceans. It is the world's sixth-largest country by total area...
, 4 km south-east from Melbourne's central business district
Melbourne city centre
Melbourne City Centre is an area of Melbourne in Victoria, Australia. It is not to be confused with the larger local government area of the City of Melbourne...
. Its Local Government Area are the Cities of Stonnington
City of Stonnington
The City of Stonnington is a Local Government Area located within the metropolitan area of Melbourne, Victoria, Australia. It comprises the inner south-eastern suburbs, between 3 and 13 kilometres from the Melbourne CBD...
and Melbourne
City of Melbourne
The City of Melbourne is a Local Government Area in Victoria, Australia, located in the central city area of Melbourne. The city has an area of 36 square kilometres and has an estimated population of 93,105 people. The city's motto is "Vires acquirit eundo" which means "She gathers strength as she...
. At the 2006 Census, South Yarra had a population of 17,992.

The main shopping region of South Yarra runs along Toorak Road and Chapel Street. Trade along these two arteries are focused on trendy shopping, restaurants, nightclubs and cafe culture. The area of South Yarra centred along Commercial Road is one of Melbourne's gay village
Gay village
A gay village is an urban geographic location with generally recognized boundaries where a large number of lesbian, gay, bisexual, and transgender people live or frequent...
s.

South Yarra is also home to some of Melbourne's most prestigious residential addresses. Residential land price records (per square metre) have been set by properties in Domain Road, Walsh Street and Fairlie Court.

The area was settled by European settlers in the 1830s around the time of the establishment of Melbourne. During the 1840s, it became popular with wealthy citizens of Melbourne as a suburban retreat from the town. Several large houses were built and, together with neighbouring Toorak
Toorak, Victoria
Toorak is a suburb of Melbourne, Victoria, Australia, 5 km south-east from Melbourne's central business district located on a rise on the south side of a bend in the Yarra River. Its Local Government Area is the City of Stonnington...
, it maintained its upper-class reputation into the post-Second World War period. South Yarra Post Office was open briefly in 1854, then reopened on 21 June 1858.

During the 1920s and 1930s, many of the large gardens of the older mansions were subdivided and blocks of flats became a feature of the area. From the 1930s, the area around Park Street, where large numbers of flats had been built, became a popular neighbourhood for middle-class homosexuals; at that time an illegal subculture in the state of Victoria
Victoria (Australia)
Victoria is the second most populous state in Australia. Geographically the smallest mainland state, Victoria is bordered by New South Wales, South Australia, and Tasmania on Boundary Islet to the north, west and south respectively....
.

The building of apartment buildings, particularly around South Yarra railway station continued into the 1960s and 1970s and today South Yarra is one of the most densely populated suburbs in Melbourne. 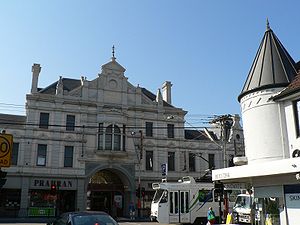 South Yarra has several local attractions. Perhaps the best known is Chapel Street
Chapel Street, Melbourne
Chapel Street is a shopping, dining and entertainment precinct in Melbourne, Australia. It has a myriad shops ranging from exclusive upmarket fashion designers at the South Yarra end to old fashion pawnbrokers towards Windsor.-Geography:...
. The South Yarra section of the famous street is the most fashionable and upmarket end. A major landmark is The Jam Factory
The Jam Factory
right|thumb|250px|Jam Factory, Chapel StreetThe Jam Factory is a shopping and entertainment centre, located in cosmopolitan Chapel Street, South Yarra, a suburb of Melbourne, Australia. The centre contains a Village Cinema complex, Intencity arcade, fashion stores and numerous cafés and...
, old factories converted into upmarket shopping centre and cinemas. The Como Centre is a large shopping centre on the corner of Toorak and Chapel Streets which combines with an office building, South Yarra's tallest, which houses the headquarters for ATV-10
ATV-10
ATV is a television station in Melbourne, Australia, part of Network Ten - one of the three major Australian commercial television networks.-History:...
and Global Television's TV production facilities.

The Prahran Market
Prahran Market
The Prahran Market is one of the premier fresh food markets in Melbourne, Australia. It has existed on its present site in Commercial Road, South Yarra, some 200 metres from Chapel Street, for over 125 years. The market offers a variety of stalls and shops offering fresh fruit and vegetables, meat,...
, located in South Yarra, is one of Melbourne's most popular and historic fresh produce markets.

Toorak Road runs off Chapel Street and although not known as well as Toorak Village, is a popular strip that contains a wide range of shops.

There are also several heritage registered buildings in South Yarra including the Melbourne High School (1928), the former railway station building (1874) and post office (1893).

Many historic mansions can be found in South Yarra. Heritage registered houses include Como House (1847), one of Melbourne's earliest mansions on its large estate on Williams Road now owned by the National Trust and known for its long association with the Armytage family , Richmond House (1859) in Avoca Street, formerly home to Sir Rupert Clarke Bt, Barwon (1881) and Airlie House on Domain Road, once the townhouse of the Chirnside family of Werribee Park fame, which now serves as a leadership college for Victoria Police.

Other grand South Yarra houses include "Wavendon", formerly home to film director Fred Schepisi, in Walsh Street, and "Raveloe" in Domain Road, built by Dame Nellie Melba's father in the 1870s. Domain Road, with its proximity to the King's Domain, the Royal Botanic Gardens and Government House, is at the centre of the exclusive Domain precinct. Fairbairn, built for the pastoralist Fairbairn family and the next-door property, "Poolman House", on the corner of Domain Road and Punt Road, are among the largest mansions in South Yarra. "Poolman House" was built by stock and station agent Richard Goldsbrough in 1865 and extended in 1880. "Poolman House" was owned by the Poolman family from 1921, who entertained grandly in the ballroom they added in 1928. In 1956 Mrs Audrey Poolman donated the house to Christ Church South Yarra who used it as a nursing home for genteel old Anglican ladies for thirty years, until in 1986, the house was bought from the Church of England by international interior designer John Coote, who restored the house at vast expense. Poolman House has been owned by the Matthies family since the year 2000. Snainton at 80 Clowes Street, South Yarra, is a notable example of grand Federation architecture, as is its sister property at 72 Clowes Street, South Yarra, formerly home to the Alstegren family, which sold for a notable $9 million in 2008.

An important area for Art Deco enthusiasts can be found along Alexandra Avenue, Lawson Grove and Darling Street. This area was subject to renewal in the 1920s and 1930s by an entrepreneurial builder Mr Lawson, as a kind of medium-density village enclave development. As a result, a large number of Art Deco apartment buildings were built in a Hollywood Hills style overlooking the Yarra river. One of the most famous of these apartment buildings, "Beverly Hills" on Darling Street, retains the original 1930s grotto-style swimming pool for the use of all residents. Nearby in Lawson Grove the Lawson Grove café can be found on the ground floor of a 1930s Art Deco building. It was originally intended to run as a convenience store for local residents but is now a chic café for those in the know.

Melbourne Synagogue, which was built in 1929 to the design of Nahum Barnet
Nahum Barnet
Nahum Barnet was an architect working in Melbourne, Victoria, Australia during the Victorian and Edwardian periods....
features a giant order portico
Portico
A portico is a porch leading to the entrance of a building, or extended as a colonnade, with a roof structure over a walkway, supported by columns or enclosed by walls...
and a great copper dome. Christ Church is an historic Anglican church located on the corner of Toorak and Punt Roads. Its tall spire is a landmark. There are several smaller churches secluded in the back streets of South Yarra.

A 2005 report called Liveable Melbourne that was commissioned by The Age
The Age
The Age is a daily broadsheet newspaper, which has been published in Melbourne, Australia since 1854. Owned and published by Fairfax Media, The Age primarily serves Victoria, but is also available for purchase in Tasmania, the Australian Capital Territory and border regions of South Australia and...
and conducted by Tract Consultants and ACIL Tasman, ranked Melbourne suburbs and assigned them scores on fourteen characteristics such as crime, CBD proximity, and traffic congestion. The report found that of all Melbourne suburbs, South Yarra was the most liveable due to good proximity to the CBD, schools, cafes, and restaurants; access to trains, trams, and buses; and abundance of open spaces and trees. On the downside, the same study also found that South Yarra had a very high crime rate.

Hawksburn is a locality in the eastern part of South Yarra bordering Toorak. It is probably best known for its railway station and nearby "Hawksburn Village", a small strip shopping centre on Malvern Road. Many of South Yarra's finest old homes and terraces are situated close to Cromwell Crescent and railway station in the Hawksburn area. The Hawksburn area is a fashionable address, due to its locality at the centre of Stonnington. Hawksburn Post Office opened in 1890.

The "Domain Precinct" is the most prestigious part of South Yarra, traditionally home to many of Melbourne's old money families. Bordered by Punt Road, Toorak Road, Anderson Street, St Kilda Road and Alexandra Avenue, the Domain Precinct has recorded some of Victoria's highest land values on a square metre basis. Driven by proximity to the Botanical Gardens, Melbourne's elite private schools and boutique shopping, this area is graced with both large mansions and high-end apartments. The most valuable streets include Walsh Street, Fairlie Court, St Leonards Court, Avoca Street, Anderson Street, Domain Road and Marne Street.