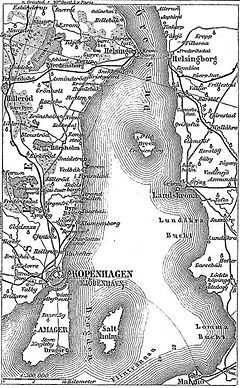 The Sound Dues were a toll
Tariff
A tariff may be either tax on imports or exports , or a list or schedule of prices for such things as rail service, bus routes, and electrical usage ....
on the use of the Sound which constituted up to two thirds of Denmark
Denmark
Denmark is a Scandinavian country in Northern Europe. The countries of Denmark and Greenland, as well as the Faroe Islands, constitute the Kingdom of Denmark . It is the southernmost of the Nordic countries, southwest of Sweden and south of Norway, and bordered to the south by Germany. Denmark...
's state income in the 16th and 17th centuries. The dues were introduced by King Eric of Pomerania
Eric of Pomerania
Eric of Pomerania KG was King Eric III of Norway Norwegian Eirik, King Eric VII of Denmark , and as Eric King of Sweden...
in 1429 and remained in effect until the Copenhagen Convention of 1857.

All foreign ships passing through the strait, whether en route to or from Denmark or not, had to stop in Helsingør and pay a toll to the Danish Crown
Danish Royal Family
The Danish Royal Family includes the Queen of Denmark and her family. All members except the Queen hold the title of Prince/Princess of Denmark with the style of His/Her Royal Highness or His/Her Highness. The Queen is styled Her Majesty. The Queen and her siblings belong to the House of...
. If a ship refused to stop, cannons in both Helsingør and Helsingborg
Helsingborg
Helsingborg is a city and the seat of Helsingborg Municipality, Skåne County, Sweden with 97,122 inhabitants in 2010. Helsingborg is the centre of an area in the Øresund region of about 320,000 inhabitants in north-west Scania, and is Sweden's closest point to Denmark, with the Danish city...
could open fire and sink it. In 1567, the toll was changed into a 1-2% tax of the cargo
Cargo
Cargo is goods or produce transported, generally for commercial gain, by ship, aircraft, train, van or truck. In modern times, containers are used in most intermodal long-haul cargo transport.-Marine:...
value, providing three times more revenue.

In order to avoid ships simply taking a different route, tolls were also collected at the two other Danish straits, the Great Belt
Great Belt
The Great Belt is a strait between the main Danish islands of Zealand and Funen . Effectively dividing Denmark in two, the Belt was served by the Great Belt ferries from the late 19th century until the islands were connected by the Great Belt Fixed Link in 1997–98.-Geography:The Great Belt is the...
and the Little Belt
Little Belt
The Little Belt is a strait between the Danish island of Funen and the Jutland Peninsula.The belt is about 50 km long and 800m to 28 km wide, the maximum depth is approximately 75 m, and contains numerous small Danish islands....
; sometimes non-Danish vessels were forbidden to use any other waterways but the Øresund, and transgressing vessels were confiscated or sunk.

The Sound Dues remained the most important source of income for the Danish Crown for several centuries, thus making Danish kings relatively independent of Denmark's Privy Council and aristocracy
Aristocracy
Aristocracy , is a form of government in which a few elite citizens rule. The term derives from the Greek aristokratia, meaning "rule of the best". In origin in Ancient Greece, it was conceived of as rule by the best qualified citizens, and contrasted with monarchy...
. However, the dues were an irritant to nations engaged in trade in the Baltic Sea
Baltic Sea
The Baltic Sea is a brackish mediterranean sea located in Northern Europe, from 53°N to 66°N latitude and from 20°E to 26°E longitude. It is bounded by the Scandinavian Peninsula, the mainland of Europe, and the Danish islands. It drains into the Kattegat by way of the Øresund, the Great Belt and...
, especially Sweden. Sweden had initially been exempted from the dues at the time of their introduction because it was then in the Kalmar Union
Kalmar Union
The Kalmar Union is a historiographical term meaning a series of personal unions that united the three kingdoms of Denmark, Norway , and Sweden under a single monarch, though intermittently and with a population...
along with Denmark. However, after the Kalmar War
Kalmar War
The Kalmar War was a war between Denmark–Norway and Sweden. Though Denmark soon gained the upper hand, she was unable to defeat Sweden entirely...
and the Treaty of Knäred
Treaty of Knäred
The Treaty of Knäred was signed on 21 January 1613 and ended the Kalmar War between Denmark and Sweden. It is named after the village of Knäred in Halland, where it was signed. As a result, Sweden had to pay a ransom for the return of the fortress of Älvsborg...
in 1613 Denmark introduced dues on cargoes from Sweden's Baltic possessions and on non-Swedish ships carrying Swedish cargo. The friction over the Dues was an official casus belli
Casus belli
is a Latin expression meaning the justification for acts of war. means "incident", "rupture" or indeed "case", while means bellic...
of the Torstenson War in 1643.

In 1658/1660, Denmark had to cede her provinces east of the sound (Scania
Scania
Scania is the southernmost of the 25 traditional non-administrative provinces of Sweden, constituting a peninsula on the southern tip of the Scandinavian peninsula, and some adjacent islands. The modern administrative subdivision Skåne County is almost, but not totally, congruent with the...
, Halland
Halland
' is one of the traditional provinces of Sweden , on the western coast of Sweden. It borders Västergötland, Småland, Scania and the sea of Kattegat.-Administration:...
, Blekinge
Blekinge
' is one of the traditional provinces of Sweden , situated in the south of the country. It borders Småland, Scania and the Baltic Sea.The name "Blekinge" comes from the adjective bleke, which corresponds to the nautical term for "dead calm"....
, Bohuslän
Bohuslän
' is a Swedish traditional province, or landskap, situated in Götaland on the northernmost part of the country's west coast. It is bordered by Dalsland to the northeast, Västergötland to the southeast, the Skagerrak arm of the North Sea to the west, and the county of Østfold in Norway to the north...
, and the island of Ven) to Sweden as a consequence of the Second Northern War
Second Northern War
The Second Northern War was fought between Sweden and its adversaries the Polish–Lithuanian Commonwealth , Russia , Brandenburg-Prussia , the Habsburg Monarchy and Denmark–Norway...
. Thus, the toll could not be enforced as well as before but Denmark retained its established right of the dues. Swedish shipping became exempt from the Sound Dues by the terms of the Treaty of Copenhagen, signed on 27 May 1660. The exemption was rescinded after Sweden's defeat in the Great Northern War
Great Northern War
The Great Northern War was a conflict in which a coalition led by the Tsardom of Russia successfully contested the supremacy of the Swedish Empire in northern Central Europe and Eastern Europe. The initial leaders of the anti-Swedish alliance were Peter I the Great of Russia, Frederick IV of...
and the Treaty of Frederiksborg
Treaty of Frederiksborg
The Treaty of Frederiksborg refers to the treaty signed at Frederiksborg Palace on 3 July 1720 that ended the Great Northern War between Sweden and Denmark-Norway. Sweden paid 600,000 Riksdaler in damages, broke the alliance with Holstein and forfeited its right to duty free passage of Öresund...
of 1720, although the eastern shore of the Sound was now Swedish.

The Copenhagen Convention, which came info force on 14 March 1857, abolished the dues and all Danish Straits
Danish straits
The Danish straits are the three channels connecting the Baltic Sea to the North Sea through the Kattegat and Skagerrak. They transect Denmark, and are not to be confused with the Denmark Strait between Greenland and Iceland...
were made international waterways
International waters
The terms international waters or trans-boundary waters apply where any of the following types of bodies of water transcend international boundaries: oceans, large marine ecosystems, enclosed or semi-enclosed regional seas and estuaries, rivers, lakes, groundwater systems , and wetlands.Oceans,...
free to all military and commercial shipping. It had been increasingly evident that the Sound Dues had a negative impact on the port and merchants of Copenhagen
Copenhagen
Copenhagen is the capital and largest city of Denmark, with an urban population of 1,199,224 and a metropolitan population of 1,930,260 . With the completion of the transnational Øresund Bridge in 2000, Copenhagen has become the centre of the increasingly integrating Øresund Region...
, although the dues delivered by then one eighth of the Danish state income; and the world's sea-using nations were becoming less and less tolerant of these tolls and restrictions. In compensation for the abolition, the Danish state received a one-time fee of 33.5 million Danish rigsdaler
Danish rigsdaler
The rigsdaler was the name of several currencies used in Denmark until 1873. The similarly named Reichsthaler, riksdaler and rijksdaalder were used in Germany and Austria-Hungary, Sweden and the Netherlands, respectively....
s, paid to Denmark by the other European shipping nations who signed the Convention. Of the total fee, Great Britain
Great Britain
Great Britain or Britain is an island situated to the northwest of Continental Europe. It is the ninth largest island in the world, and the largest European island, as well as the largest of the British Isles...
paid approximately one third, and Russia
Russian Empire
The Russian Empire was a state that existed from 1721 until the Russian Revolution of 1917. It was the successor to the Tsardom of Russia and the predecessor of the Soviet Union...
another third. A similar convention between Denmark and the United States
United States
The United States of America is a federal constitutional republic comprising fifty states and a federal district...
, signed in Washington the same year, gave American ships free passage in perpetuity for a one-time fee of $
United States dollar
The United States dollar , also referred to as the American dollar, is the official currency of the United States of America. It is divided into 100 smaller units called cents or pennies....
393,000.
The source of this article is wikipedia, the free encyclopedia.  The text of this article is licensed under the GFDL.