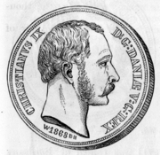 Encyclopedia
The rigsdaler was the name of several currencies used in Denmark
Denmark
Denmark is a Scandinavian country in Northern Europe. The countries of Denmark and Greenland, as well as the Faroe Islands, constitute the Kingdom of Denmark . It is the southernmost of the Nordic countries, southwest of Sweden and south of Norway, and bordered to the south by Germany. Denmark...
until 1873. The similarly named Reichsthaler
Reichsthaler
The Reichsthaler was a standard Thaler of the Holy Roman Empire, established in 1566 by the Leipzig convention. It was also the name of a unit of account in northern Germany and of a silver coin issued by Prussia.-Reichsthaler coin:...
, riksdaler and rijksdaalder were used in Germany
Germany
Germany , officially the Federal Republic of Germany , is a federal parliamentary republic in Europe. The country consists of 16 states while the capital and largest city is Berlin. Germany covers an area of 357,021 km2 and has a largely temperate seasonal climate...
and Austria-Hungary
Austria-Hungary
Austria-Hungary , more formally known as the Kingdoms and Lands Represented in the Imperial Council and the Lands of the Holy Hungarian Crown of Saint Stephen, was a constitutional monarchic union between the crowns of the Austrian Empire and the Kingdom of Hungary in...
, Sweden
Sweden
Sweden , officially the Kingdom of Sweden , is a Nordic country on the Scandinavian Peninsula in Northern Europe. Sweden borders with Norway and Finland and is connected to Denmark by a bridge-tunnel across the Öresund....
and the Netherlands
Netherlands
The Netherlands is a constituent country of the Kingdom of the Netherlands, located mainly in North-West Europe and with several islands in the Caribbean. Mainland Netherlands borders the North Sea to the north and west, Belgium to the south, and Germany to the east, and shares maritime borders...
, respectively. 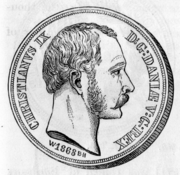 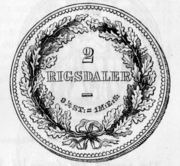 The Danish currency system established in 1625 consisted of 12 penning
Pfennig
The Pfennig , plural Pfennige, is an old German coin or note, which existed from the 9th century until the introduction of the euro in 2002....
= 1 skilling, 16 skilling = 1 mark
Mark (money)
Mark was a measure of weight mainly for gold and silver, commonly used throughout western Europe and often equivalent to 8 ounces. Considerable variations, however, occurred throughout the Middle Ages Mark (from a merging of three Teutonic/Germanic languages words, Latinized in 9th century...
, 6 mark = 1 rigsdaler and 8 mark = 1 krone.http://www.globalfinancialdata.com/index.php3?action=showghoc&country_name=DENMARK From 1713, two separate systems coexisted, courant and species, with courant being a debased currency also used for banknote issue. The rigsdaler species contained of a Cologne mark
Cologne mark
The Cologne Mark was a unit of weight equivalent to 233.856 grams. It was introduced by the Danish King Hans in the late 15th century and was used as a standard for weighing metals...
of fine silver (i.e., 9¼ rigsdaler species equalled one Cologne mark).

In 1813, following a financial crisis, a new currency system was introduced, based on the rigsbankdaler. This was divided into 96 rigsbank skilling and was equal to half a rigsdaler species or 6 rigsdaler courant.

In 1873, Denmark and Sweden formed the Scandinavian Monetary Union
Scandinavian Monetary Union
The Scandinavian Monetary Union was a monetary union formed by Sweden and Denmark on May 5, 1873, by fixing their currencies against gold at par to each other...
and the rigsdaler was replaced by the Danish krone
Danish krone
The krone is the official currency of the Kingdom of Denmark consisting of Denmark, the Faroe Islands and Greenland. It is subdivided into 100 øre...
. An equal valued krone/krona of the monetary union replaced the three currencies at the rate of 1 krone/krona = ½ Danish rigsdaler = ¼ Norwegian speciedaler
Norwegian speciedaler
The speciedaler was the currency of Norway between 1816 and 1875. It replaced the rigsdaler specie at par and was subdivided into 120 skilling . It was replaced by the Norwegian krone when Norway joined the Scandinavian Monetary Union...
= 1 Swedish riksdaler
Swedish riksdaler
The riksdaler was the name of a Swedish coin first minted in 1604. Between 1777 and 1873, it was the currency of Sweden. The daler, like the dollar, was named after the German Thaler. The similarly named Reichsthaler, rijksdaalder, and rigsdaler were used in Germany and Austria-Hungary, the...
. Today, a tokrone (coin worth 2 kroner) is thus occasionally referred to as a daler.

In 1813, the Rigsbank introduced notes in denominations of 1, 5, 10, 50 and 100 rigsbankdaler. These were followed, in 1819, by notes of the National Bank in the same denominations. After the change in name of the currency, the National Bank issued notes for 5, 10, 20, 50 and 100 rigsbankdaler.
The source of this article is wikipedia, the free encyclopedia.  The text of this article is licensed under the GFDL.