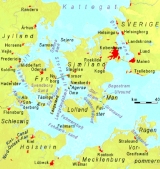 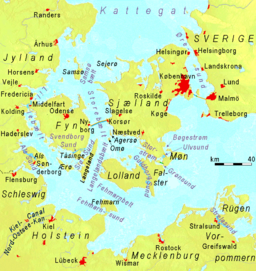 The Danish straits are the three channels connecting the Baltic Sea
Baltic Sea
The Baltic Sea is a brackish mediterranean sea located in Northern Europe, from 53°N to 66°N latitude and from 20°E to 26°E longitude. It is bounded by the Scandinavian Peninsula, the mainland of Europe, and the Danish islands. It drains into the Kattegat by way of the Øresund, the Great Belt and...
to the North Sea
North Sea
In the southwest, beyond the Straits of Dover, the North Sea becomes the English Channel connecting to the Atlantic Ocean. In the east, it connects to the Baltic Sea via the Skagerrak and Kattegat, narrow straits that separate Denmark from Norway and Sweden respectively...
through the Kattegat
Kattegat
The Kattegat , or Kattegatt is a sea area bounded by the Jutland peninsula and the Straits islands of Denmark on the west and south, and the provinces of Västergötland, Scania, Halland and Bohuslän in Sweden on the east. The Baltic Sea drains into the Kattegat through the Øresund and the Danish...
and Skagerrak
Skagerrak
The Skagerrak is a strait running between Norway and the southwest coast of Sweden and the Jutland peninsula of Denmark, connecting the North Sea and the Kattegat sea area, which leads to the Baltic Sea.-Name:...
. They transect Denmark, and are not to be confused with the Denmark Strait
Denmark Strait
The Denmark Strait or Greenland Strait |Sound]]) is an oceanic strait between Greenland and Iceland...
between Greenland
Greenland
Greenland is an autonomous country within the Kingdom of Denmark, located between the Arctic and Atlantic Oceans, east of the Canadian Arctic Archipelago. Though physiographically a part of the continent of North America, Greenland has been politically and culturally associated with Europe for...
and Iceland
Iceland
Iceland , described as the Republic of Iceland, is a Nordic and European island country in the North Atlantic Ocean, on the Mid-Atlantic Ridge. Iceland also refers to the main island of the country, which contains almost all the population and almost all the land area. The country has a population...
. The three main passages are:


By closer view there are five straits named belt (Danish: Bælt), the only ones in the world and several straits named sound (Danish, Swedish and German: sund). Where an island is situated between a belt and a sound, typically the broader strait is called belt and the more narrow one is the sound:

Etymology and general use of Sound / Sund

The Germanic
Germanic languages
The Germanic languages constitute a sub-branch of the Indo-European language family. The common ancestor of all of the languages in this branch is called Proto-Germanic , which was spoken in approximately the mid-1st millennium BC in Iron Age northern Europe...
word "sound" has the same root as the verb "to sunder" in the meaning of to separate. In Swedish language
Swedish language
Swedish is a North Germanic language, spoken by approximately 10 million people, predominantly in Sweden and parts of Finland, especially along its coast and on the Åland islands. It is largely mutually intelligible with Norwegian and Danish...
any strait is called "Sund". In Norway hundreds of narrow straits separating islands and combining Fjords or outer parts of Fjords are named "Sund". Another explanation derives Sound from an ancient verb "sund" in the meaning of to swim. That way a sound is a swimmable strait.