Encyclopedia
Solkan is a suburb
Suburb
The word suburb mostly refers to a residential area, either existing as part of a city or as a separate residential community within commuting distance of a city . Some suburbs have a degree of administrative autonomy, and most have lower population density than inner city neighborhoods...
of the town of Nova Gorica
Nova Gorica
Nova Gorica ; 21,082 ; 31,000 ) is a town and a municipality in western Slovenia, on the border with Italy...
in the Goriška
Goriška
Goriška is a traditional region in western Slovenia on the border with Italy. The name means "the Gorizia region" because it is named after Gorizia, Italy. It is part of the wider traditional region of the Slovenian Littoral . Its principal urban center is Nova Gorica...
region of western Slovenia
Slovenia
Slovenia , officially the Republic of Slovenia , is a country in Central and Southeastern Europe touching the Alps and bordering the Mediterranean. Slovenia borders Italy to the west, Croatia to the south and east, Hungary to the northeast, and Austria to the north, and also has a small portion of...
, close to the border with Italy
Italy
Italy , officially the Italian Republic languages]] under the European Charter for Regional or Minority Languages. In each of these, Italy's official name is as follows:;;;;;;;;), is a unitary parliamentary republic in South-Central Europe. To the north it borders France, Switzerland, Austria and...
. Although it is nowadays completely integrated into Nova Gorica, with which it forms a single urban area, it has maintained the status of a separate urban settlement, due to its history and strong local identity of its inhabitants.

Solkan was first mentioned in the year 1001, in the same document as the neighbouring town of Gorizia
Gorizia
Gorizia is a town and comune in northeastern Italy, in the autonomous region of Friuli Venezia Giulia. It is located at the foot of the Julian Alps, bordering Slovenia. It is the capital of the Province of Gorizia, and it is a local center of tourism, industry, and commerce. Since 1947, a twin...
(now in Italy), which was then still a village. During the rule of the Counts of Gorizia in the Middle Ages
Middle Ages
The Middle Ages is a periodization of European history from the 5th century to the 15th century. The Middle Ages follows the fall of the Western Roman Empire in 476 and precedes the Early Modern Era. It is the middle period of a three-period division of Western history: Classic, Medieval and Modern...
, Gorizia developed into an important urban settlement, while Solkan maintained its predominantly rural character. Contrary to Gorizia, in which the Friulian and later Venetian language
Venetian language
Venetian or Venetan is a Romance language spoken as a native language by over two million people, mostly in the Veneto region of Italy, where of five million inhabitants almost all can understand it. It is sometimes spoken and often well understood outside Veneto, in Trentino, Friuli, Venezia...
prevailed over Slovene by the end of the 16th century, Solkan has remained an essentially Slovene-speaking village.

In the 18th century, the incorporation of Solkan into the urban area of Gorizia slowly begun, as many local noble families built their residences in it. In the second half of the 19th century, it developed into an important center of furnishing industry. The expansion of nearby Gorizia was transforming Solkan into a suburb.

During World War I
World War I
World War I , which was predominantly called the World War or the Great War from its occurrence until 1939, and the First World War or World War I thereafter, was a major war centred in Europe that began on 28 July 1914 and lasted until 11 November 1918...
, the village was almost completely destroyed in the Battles of the Isonzo
Battles of the Isonzo
The Battles of the Isonzo were a series of 12 battles between the Austro-Hungarian and Italian armies in World War I. They were fought along the Soča River on the eastern sector of the Italian Front between June 1915 and November 1917...
. After the collapse of Austria-Hungary
Austria-Hungary
Austria-Hungary , more formally known as the Kingdoms and Lands Represented in the Imperial Council and the Lands of the Holy Hungarian Crown of Saint Stephen, was a constitutional monarchic union between the crowns of the Austrian Empire and the Kingdom of Hungary in...
in 1918, it became part of the Kingdom of Italy, together with all the County of Gorizia and Gradisca. Its predominantly Slovene population suffered under the policies of Fascist Italianization between the 1920s and 1940s. In 1925, it was abolished as a separate municipality and merged with Gorizia. Nevertheless, Solkan remained a separate settlement due to the hindered urban expansion of Gorizia after the annexation to Italy. During World War II
World War II
World War II, or the Second World War , was a global conflict lasting from 1939 to 1945, involving most of the world's nations—including all of the great powers—eventually forming two opposing military alliances: the Allies and the Axis...
, it became one of the major centers of Partisan resistance in the Julian March
Julian March
The Julian March is a former political region of southeastern Europe on what are now the borders between Croatia, Slovenia, and Italy...
.

In 1947, Solkan was annexed to the Socialist Federal Republic of Yugoslavia
Socialist Federal Republic of Yugoslavia
The Socialist Federal Republic of Yugoslavia was the Yugoslav state that existed from the abolition of the Yugoslav monarchy until it was dissolved in 1992 amid the Yugoslav Wars. It was a socialist state and a federation made up of six socialist republics: Bosnia and Herzegovina, Croatia,...
, while Gorizia remained in Italy, thus cutting off the secular connection of the two settlements. The same year, the construction of a new town of Nova Gorica
Nova Gorica
Nova Gorica ; 21,082 ; 31,000 ) is a town and a municipality in western Slovenia, on the border with Italy...
begun in the area previously occupied by vineyards and fields mostly belonging to the rural area of Solkan. In 1952, the City of Nova Gorica was created and Solkan was incorporated into it. Since then, it has gradually merged with the modern town of Nova Gorica, although it has maintained its separate legal status and a pronounced local identity. 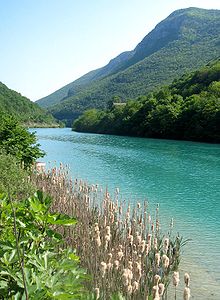 Solkan has been a largely Slovene settlement. It has however also had different ethnic and linguistic minorities. Since the Middle Ages, many Friulians
Friulians
Friulians or Furlans are a linguistic minority living in Italy and elsewhere. About 530,000 of them live in the provinces of Udine and Pordenone and in parts of Gorizia and Venice. Their language, the Friulian language, is the second largest minority language in Italy. About 170,000 Friulians live...
have lived in Solkan, but they have been now mostly assimilated. Italians lived here mostly between the late 19th and early 20th century, but after 1947 they mostly fled to Italy or assimilated to the Slovene majority. Immigrants from other regions of former Yugoslavia
Former Yugoslavia
The former Yugoslavia is a term used to describe the present day states which succeeded the collapse of the Socialist Federal Republic of Yugoslavia....
started settling in Solkan from early 1970s. Today, Slovenes represent around 90% of the population, the remaining 10% are mostly Serbs
Serbs
The Serbs are a South Slavic ethnic group of the Balkans and southern Central Europe. Serbs are located mainly in Serbia, Montenegro and Bosnia and Herzegovina, and form a sizable minority in Croatia, the Republic of Macedonia and Slovenia. Likewise, Serbs are an officially recognized minority in...
, Croats
Croats
Croats are a South Slavic ethnic group mostly living in Croatia, Bosnia and Herzegovina and nearby countries. There are around 4 million Croats living inside Croatia and up to 4.5 million throughout the rest of the world. Responding to political, social and economic pressure, many Croats have...
, and Bosnians
Bosnians
Bosnians are people who reside in, or come from, Bosnia and Herzegovina. By the modern state definition a Bosnian can be anyone who holds citizenship of the state. This includes, but is not limited to, members of the constituent ethnic groups of Bosnia and Herzegovina: Bosniaks, Bosnian Serbs and...
, together with smaller numbers of Italians and Albanians
Albanians
Albanians are a nation and ethnic group native to Albania and neighbouring countries. They speak the Albanian language. More than half of all Albanians live in Albania and Kosovo...
.

According to the census of 1991, 91% of the population spoke Slovene as their first language
First language
A first language is the language a person has learned from birth or within the critical period, or that a person speaks the best and so is often the basis for sociolinguistic identity...
. Serbo-Croatian
Serbo-Croatian
Serbo-Croatian or Serbo-Croat, less commonly Bosnian/Croatian/Serbian , is a South Slavic language with multiple standards and the primary language of Serbia, Croatia, Bosnia and Herzegovina, and Montenegro...
came second with a little less than 8%. The native inhabitants of Solkan speak a variant of the Karst
Kras
Karst ; also known as the Karst Plateau, is a limestone borderline plateau region extending in southwestern Slovenia and northeastern Italy. It lies between the Vipava Valley, the low hills surrounding the valley, the westernmost part of the Brkini Hills, northern Istria, and the Gulf of Trieste...
dialect of Slovene. The Solkan variant of the dialect served as the basis for the development of the urban dialect of Nova Gorica, which emerged with the second generation of settlers of the town. The Solkan dialect has become well known throughout Slovenia since the early 1990s because the singer-songwriter
Singer-songwriter
Singer-songwriters are musicians who write, compose and sing their own musical material including lyrics and melodies. As opposed to contemporary popular music singers who write their own songs, the term singer-songwriter describes a distinct form of artistry, closely associated with the...
Iztok Mlakar
Iztok Mlakar
Iztok Mlakar is a Slovenian singer-songwriter, chansonnier and theatre actor. Known as the "bard of the Slovenian Littoral", he is most famous for his songs in the Slovene dialect from Goriška...
uses it in the lyrics of his songs.

The culture of Solkan has been strongly influenced by the contacts with neighbouring Italian region of Friuli
Friuli
Friuli is an area of northeastern Italy with its own particular cultural and historical identity. It comprises the major part of the autonomous region Friuli-Venezia Giulia, i.e. the province of Udine, Pordenone, Gorizia, excluding Trieste...
. The influence can be felt in the local cuisine, language, customs and traditions.

Its most prominent landmark is the Solkan Bridge
Solkan Bridge
Solkan Bridge is a 220-metre long stone bridge over the river Soča near Nova Gorica in western Slovenia. With an arch span of 85 metres it is the second longest stone arch in the world and the longest stone arch among train bridges. It was built in the time of the Secession, between 1900 and...
, built between 1904 and 1905. It is a bridge over the Soča
Soca
The Soča or Isonzo is a 140 km long river that flows through western Slovenia and northeastern Italy. An Alpine river in character, its source lies in the Trenta Valley in the Julian Alps in Slovenia, at an elevation of around 1,100 metres...
River on the Jesenice to Nova Gorica railway. It is 220 m long with a central arch spanning 85 m, making it the longest stone arch spanning over a river and the longest stone arch railway bridge in the world. 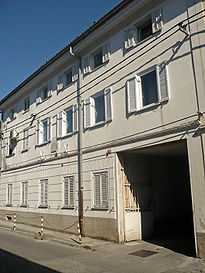 A large number of notable people were born or lived in Solkan. They include