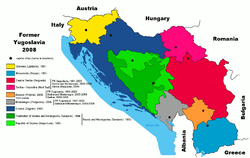 The territory of the former Yugoslavia is roughly coterminous with the geographical region of the Western Balkans; in the EU's definition of the term, the Western Balkans excludes Slovenia but includes Albania
Albania
Albania , officially known as the Republic of Albania , is a country in Southeastern Europe, in the Balkans region. It is bordered by Montenegro to the northwest, Kosovo to the northeast, the Republic of Macedonia to the east and Greece to the south and southeast. It has a coast on the Adriatic Sea...
.

These countries are, listed geographically from northwest to southeast:
Slovenia
Slovenia
Slovenia , officially the Republic of Slovenia , is a country in Central and Southeastern Europe touching the Alps and bordering the Mediterranean. Slovenia borders Italy to the west, Croatia to the south and east, Hungary to the northeast, and Austria to the north, and also has a small portion of...
(1991 to present) Croatia
Croatia
Croatia , officially the Republic of Croatia , is a unitary democratic parliamentary republic in Europe at the crossroads of the Mitteleuropa, the Balkans, and the Mediterranean. Its capital and largest city is Zagreb. The country is divided into 20 counties and the city of Zagreb. Croatia covers ...
(1991 to present) Bosnia and Herzegovina
Bosnia and Herzegovina
Bosnia and Herzegovina , sometimes called Bosnia-Herzegovina or simply Bosnia, is a country in Southern Europe, on the Balkan Peninsula. Bordered by Croatia to the north, west and south, Serbia to the east, and Montenegro to the southeast, Bosnia and Herzegovina is almost landlocked, except for the...
(1992 to present) Serbia and Montenegro
Serbia and Montenegro
Serbia and Montenegro was a country in southeastern Europe, formed from two former republics of the Socialist Federal Republic of Yugoslavia : Serbia and Montenegro. Following the breakup of Yugoslavia, it was established in 1992 as a federation called the Federal Republic of Yugoslavia...
(1992 to 2006)


Relations with the European Union

EULEX  (European Union Rule of Law Mission in Kosovo) is a deployment of EU police and civilian resources to Kosovo in an attempt to restore rule of law and combat the widespread organized crime.

The last Yugoslavian census took place in 1991. At that point, the country's total population was at 22.4 million
The CIA Factbook has estimates for the populations of Yugoslavia's successor states as of July 2011 which amount to a total population of 23.0 million.
Net population growth over the two decades between 1991 and 2011 was thus practically zero (below 0.1% p.a. on average).
Broken down by territory:


The successor states of Yugoslavia continue to have a population growth rate that is close to zero or negative. This is mostly due to emigration.

Ethno-linguistically, the majority of the former Yugoslavia is South Slavic, speaking a dialect continuum clustered around the Serbo-Croatian
Serbo-Croatian language
Serbo-Croatian or Serbo-Croat, less commonly Bosnian/Croatian/Serbian , is a South Slavic language with multiple standards and the primary language of Serbia, Croatia, Bosnia and Herzegovina, and Montenegro...
, Slovene and Macedonian
Macedonian language
Macedonian is a South Slavic language spoken as a first language by approximately 2–3 million people principally in the region of Macedonia but also in the Macedonian diaspora...
. Other larger ethnic groups include Albanians
Albanians
Albanians are a nation and ethnic group native to Albania and neighbouring countries. They speak the Albanian language. More than half of all Albanians live in Albania and Kosovo...
(mostly in Kosovo), Hungarians (mostly in Vojvodina
Vojvodina
Vojvodina, officially called Autonomous Province of Vojvodina is an autonomous province of Serbia. Its capital and largest city is Novi Sad...
), Roma and other minorities.