Encyclopedia
Nova Gorica is a town and a municipality in western Slovenia
Slovenia
Slovenia , officially the Republic of Slovenia , is a country in Central and Southeastern Europe touching the Alps and bordering the Mediterranean. Slovenia borders Italy to the west, Croatia to the south and east, Hungary to the northeast, and Austria to the north, and also has a small portion of...
, on the border with Italy
Italy
Italy , officially the Italian Republic languages]] under the European Charter for Regional or Minority Languages. In each of these, Italy's official name is as follows:;;;;;;;;), is a unitary parliamentary republic in South-Central Europe. To the north it borders France, Switzerland, Austria and...
. Nova Gorica is a new town
New town
A new town is a specific type of a planned community, or planned city, that was carefully planned from its inception and is typically constructed in a previously undeveloped area. This contrasts with settlements that evolve in a more ad hoc fashion. Land use conflicts are uncommon in new...
, built after 1948 when the Paris Peace Treaty
Treaty of peace with Italy (1947)
The Treaty of Peace with Italy was a treaty signed in Paris on February 10, 1947, between Italy and the victorious powers of World War II, formally ending the hostilities...
established a new border between Yugoslavia
Socialist Federal Republic of Yugoslavia
The Socialist Federal Republic of Yugoslavia was the Yugoslav state that existed from the abolition of the Yugoslav monarchy until it was dissolved in 1992 amid the Yugoslav Wars. It was a socialist state and a federation made up of six socialist republics: Bosnia and Herzegovina, Croatia,...
and Italy, leaving nearby Gorizia
Gorizia
Gorizia is a town and comune in northeastern Italy, in the autonomous region of Friuli Venezia Giulia. It is located at the foot of the Julian Alps, bordering Slovenia. It is the capital of the Province of Gorizia, and it is a local center of tourism, industry, and commerce. Since 1947, a twin...
outside the borders of Yugoslavia, thus decapitating the Soča
Soca
The Soča or Isonzo is a 140 km long river that flows through western Slovenia and northeastern Italy. An Alpine river in character, its source lies in the Trenta Valley in the Julian Alps in Slovenia, at an elevation of around 1,100 metres...
and Vipava Valley
Vipava Valley
The Vipava Valley is a valley located in the Slovenian Littoral, between the towns of Nova Gorica and Vipava.-Geography:It is a narrow valley, serving as the main passage between Friulian lowland and central Slovenia, and thus also an important corridor connecting Northern Italy to Central Europe...
s and the north-western Kras Plateau from their traditional regional centre. Nova Gorica is the principal urban centre of the traditional region of Goriška
Goriška
Goriška is a traditional region in western Slovenia on the border with Italy. The name means "the Gorizia region" because it is named after Gorizia, Italy. It is part of the wider traditional region of the Slovenian Littoral . Its principal urban center is Nova Gorica...
in the Slovenian Littoral
Slovenian Littoral
The Slovenian Littoral is a historical region of Slovenia. Its name recalls the historical Habsburg crown land of the Austrian Littoral, of which the Slovenian Littoral was a part....
.

The name Nova Gorica literally means "New Gorizia
Gorizia
Gorizia is a town and comune in northeastern Italy, in the autonomous region of Friuli Venezia Giulia. It is located at the foot of the Julian Alps, bordering Slovenia. It is the capital of the Province of Gorizia, and it is a local center of tourism, industry, and commerce. Since 1947, a twin...
." However, most people from the area simply call the town Gorica (i.e., 'Gorizia'), while they refer to the neighboring Italian town as "Old Gorizia" (Slovene: stara Gorica). This use is also reflected in Slovenian license plates (GO for Gorica), the name of the local association football club ND Gorica
ND Gorica
ND Gorica is a Slovenian football club, playing in the town of Nova Gorica. They are one of the most successful Slovenian clubs with four Slovenian League, two Slovenian Cup and one Slovenian Supercup titles. Together with NK Maribor and NK Celje they are the only club that have participated in...
, and the local student association (Klub goriških študentov 'the Gorica Student Club').

The word "gorica" is a diminutive form of the Slovene "gora", "mountain."

Nova Gorica hosts one of the four national theatres in Slovenia. The Museum of Goriška is also located in the town's Kromberk
Kromberk
Kromberk is a settlement in the municipality of Nova Gorica in western Slovenia. Although it officially has the status of a village, it forms, together with its two satellite settlements of Ajševica and Loke, one of the four major suburbs of Nova Gorica .Kromberk Castle is located near the...
district, hosted in the Kromberk Castle.

To the south of the town lies Kostanjevica Hill, home to the Church of The Annunciation of Our Lady
Annunciation
The Annunciation, also referred to as the Annunciation to the Blessed Virgin Mary or Annunciation of the Lord, is the Christian celebration of the announcement by the angel Gabriel to Virgin Mary, that she would conceive and become the mother of Jesus the Son of God. Gabriel told Mary to name her...
and a 17th-century Franciscan
Franciscan
Most Franciscans are members of Roman Catholic religious orders founded by Saint Francis of Assisi. Besides Roman Catholic communities, there are also Old Catholic, Anglican, Lutheran, ecumenical and Non-denominational Franciscan communities....
monastery whose treasures from the past are rich indeed. The last members of the Bourbons
House of Bourbon
The House of Bourbon is a European royal house, a branch of the Capetian dynasty . Bourbon kings first ruled Navarre and France in the 16th century. By the 18th century, members of the Bourbon dynasty also held thrones in Spain, Naples, Sicily, and Parma...
, the French royal family, are buried in a crypt beneath the church (Charles X
Charles X of France
Charles X was known for most of his life as the Comte d'Artois before he reigned as King of France and of Navarre from 16 September 1824 until 2 August 1830. A younger brother to Kings Louis XVI and Louis XVIII, he supported the latter in exile and eventually succeeded him...
himself, and members of his family and entourage including his son Louis-Antoine de France
Louis-Antoine, Duke of Angouleme
Louis Antoine of France, Duke of Angoulême was the eldest son of Charles X of France and, from 1824 to 1836, the last Dauphin of France...
, and his grandson Henri d'Artois
Henri, comte de Chambord
Henri, comte de Chambord was disputedly King of France from 2 to 9 August 1830 as Henry V, although he was never officially proclaimed as such...
, nephew of Louis (neither Louis-Antoine nor Henri ever reigned as kings)). He fled France following the revolution in 1830, finding refuge in Gorizia, and eventually eternal peace. Also buried there is Pierre Louis Jean Casimir, a Bourbon nobleman who also died in exile (in 1839). 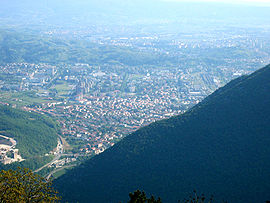 Opposite Kostanjevica Hill, north of the town is Sveta Gora (Holy Mountain), a peak of 682 m that has attracted pilgrims for 450 years. The view from there is exceptional, and on a clear day visitors can see as far as Istria
Istria
Istria , formerly Histria , is the largest peninsula in the Adriatic Sea. The peninsula is located at the head of the Adriatic between the Gulf of Trieste and the Bay of Kvarner...
, Venice
Venice
Venice is a city in northern Italy which is renowned for the beauty of its setting, its architecture and its artworks. It is the capital of the Veneto region...
, the Dolomites
Dolomites
The Dolomites are a mountain range located in north-eastern Italy. It is a part of Southern Limestone Alps and extends from the River Adige in the west to the Piave Valley in the east. The northern and southern borders are defined by the Puster Valley and the Sugana Valley...
, and the Kamnik
Kamnik Alps
The Kamnik–Savinja Alps are a mountain range, part of the Southern Limestone Alps in north Slovenia and at the border with Austria. Its western part, the Kamnik Alps, is in the basin of the Kamniška Bistrica and is named after the town Kamnik. Its eastern part is in the basin of Savinja and is...
and Julian Alps
Julian Alps
The Julian Alps are a mountain range of the Southern Limestone Alps that stretches from northeastern Italy to Slovenia, where they rise to 2,864 m at Mount Triglav. They are named after Julius Caesar, who founded the municipium of Cividale del Friuli at the foot of the mountains...
. The mountain top is home to a magnificent basilica, where concerts are occasionally held, a Franciscan monastery, and a museum of the Battles of the Isonzo
Battles of the Isonzo
The Battles of the Isonzo were a series of 12 battles between the Austro-Hungarian and Italian armies in World War I. They were fought along the Soča River on the eastern sector of the Italian Front between June 1915 and November 1917...
. 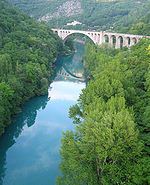 Nova Gorica is twinned
Town twinning
Twin towns and sister cities are two of many terms used to describe the cooperative agreements between towns, cities, and even counties in geographically and politically distinct areas to promote cultural and commercial ties.- Terminology :...
with:
Aleksandrovac
Aleksandrovac
Aleksandrovac is a town and municipality located in the Rasina District of Serbia. In 2002, the population of the town was 6,265, while population of the municipality was 26,534.-Sport:...
, Serbia
Serbia
Serbia , officially the Republic of Serbia , is a landlocked country located at the crossroads of Central and Southeast Europe, covering the southern part of the Carpathian basin and the central part of the Balkans...
Klagenfurt
Klagenfurt
-Name:Carinthia's eminent linguists Primus Lessiak and Eberhard Kranzmayer assumed that the city's name, which literally translates as "ford of lament" or "ford of complaints", had something to do with the superstitious thought that fateful fairies or demons tend to live around treacherous waters...
, Austria
Austria
Austria , officially the Republic of Austria , is a landlocked country of roughly 8.4 million people in Central Europe. It is bordered by the Czech Republic and Germany to the north, Slovakia and Hungary to the east, Slovenia and Italy to the south, and Switzerland and Liechtenstein to the...
Otočac
Otocac
Otočac is a town in Lika, Croatia. It lies in the northwestern part of Lika, in the Gacka river valley. The population of the town is 4,354 as of 2001, with a total of 10,411 people within the municipality at large, the majority of whom are Croats ....
, Croatia
Croatia
Croatia , officially the Republic of Croatia , is a unitary democratic parliamentary republic in Europe at the crossroads of the Mitteleuropa, the Balkans, and the Mediterranean. Its capital and largest city is Zagreb. The country is divided into 20 counties and the city of Zagreb. Croatia covers ...
San Vendemiano
San Vendemiano
San Vendemiano is a municipality in the province of Treviso, northern Italy, 30 kilometres from Treviso.Footballer Alessandro del Piero grew up in San Vendemiano....
, Italy
Italy
Italy , officially the Italian Republic languages]] under the European Charter for Regional or Minority Languages. In each of these, Italy's official name is as follows:;;;;;;;;), is a unitary parliamentary republic in South-Central Europe. To the north it borders France, Switzerland, Austria and...