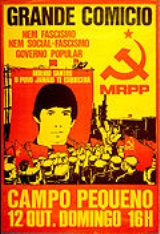 Encyclopedia
Social fascism was a theory supported by the Communist International
Comintern
The Communist International, abbreviated as Comintern, also known as the Third International, was an international communist organization initiated in Moscow during March 1919...
(Comintern) during the early 1930s, which believed that social democracy
Social democracy
Social democracy is a political ideology of the center-left on the political spectrum. Social democracy is officially a form of evolutionary reformist socialism. It supports class collaboration as the course to achieve socialism...
was a variant of fascism
Fascism
Fascism is a radical authoritarian nationalist political ideology. Fascists seek to rejuvenate their nation based on commitment to the national community as an organic entity, in which individuals are bound together in national identity by suprapersonal connections of ancestry, culture, and blood...
because, in addition to a shared corporatist
Corporatism
Corporatism, also known as corporativism, is a system of economic, political, or social organization that involves association of the people of society into corporate groups, such as agricultural, business, ethnic, labor, military, patronage, or scientific affiliations, on the basis of common...
economic model, it stood in the way of a complete and final transition to communism
Communism
Communism is a social, political and economic ideology that aims at the establishment of a classless, moneyless, revolutionary and stateless socialist society structured upon common ownership of the means of production...
. At the time, the leaders of the Comintern, such as Joseph Stalin
Joseph Stalin
Joseph Vissarionovich Stalin was the Premier of the Soviet Union from 6 May 1941 to 5 March 1953. He was among the Bolshevik revolutionaries who brought about the October Revolution and had held the position of first General Secretary of the Communist Party of the Soviet Union's Central Committee...
and Rajani Palme Dutt
Rajani Palme Dutt
Rajani Palme Dutt , best known as R. Palme Dutt, was a leading journalist and theoretician in the Communist Party of Great Britain.-Early years:...
, argued that capitalist
Capitalism
Capitalism is an economic system that became dominant in the Western world following the demise of feudalism. There is no consensus on the precise definition nor on how the term should be used as a historical category...
society had entered the "Third Period
Third Period
The Third Period is a ideological concept adopted by the Communist International at its 6th World Congress, held in Moscow in the summer of 1928....
" in which a working class revolution was imminent, but could be prevented by social democrats and other "fascist" forces. The term "social fascist" was used pejoratively to describe social democratic parties, anti-Comintern and progressive socialist parties, and dissenters within Comintern affiliates throughout the interwar period
Interwar period
Interwar period can refer to any period between two wars. The Interbellum is understood to be the period between the end of the Great War or First World War and the beginning of the Second World War in Europe....
.

At the Sixth Congress of the Comintern in 1928, the end of capitalist stability and the beginning of the "Third Period" was proclaimed. The end of capitalism, accompanied with a working class revolution, was expected, and social democracy was identified as the main enemy of the Communists. This Comintern's theory had roots in Grigory Zinoviev
Grigory Zinoviev
Grigory Yevseevich Zinoviev , born Ovsei-Gershon Aronovich Radomyslsky Apfelbaum , was a Bolshevik revolutionary and a Soviet Communist politician...
's argument that international social democracy is a wing of fascism. This view was accepted by Joseph Stalin
Joseph Stalin
Joseph Vissarionovich Stalin was the Premier of the Soviet Union from 6 May 1941 to 5 March 1953. He was among the Bolshevik revolutionaries who brought about the October Revolution and had held the position of first General Secretary of the Communist Party of the Soviet Union's Central Committee...
who described fascism and social democracy as "twin brothers", arguing that fascism depends on the active support of the social democracy and that the social democracy depends on the active support of fascism. After it was declared at the Sixth Congress, the theory of social fascism became accepted by the world Communist movement.

At the same time, Social Democratic Party of Germany
Social Democratic Party of Germany
The Social Democratic Party of Germany is a social-democratic political party in Germany...
(SPD), under leadership of German chancellor
Chancellor
Chancellor is the title of various official positions in the governments of many nations. The original chancellors were the Cancellarii of Roman courts of justice—ushers who sat at the cancelli or lattice work screens of a basilica or law court, which separated the judge and counsel from the...
Hermann Müller
Hermann Müller (politician)
' , born in Mannheim, was a German Social Democratic politician who served as Foreign Minister , and twice as Chancellor of Germany under the Weimar Republic...
, agreed with anti-communist parties that "red equals brown". This led to mutual hostility between social democrats and communists, which were additionally intensified in 1929 when Berlin's police, under control of the SPD government, shot down communist workers demonstrating on May Day
May Day
May Day on May 1 is an ancient northern hemisphere spring festival and usually a public holiday; it is also a traditional spring holiday in many cultures....
(Berlin's Bloody May). This, and the repressive legislation against the communists that followed, served as further evidence to communists that social democrats were indeed "social fascists". In 1931 in Prussia
Prussia
Prussia was a German kingdom and historic state originating out of the Duchy of Prussia and the Margraviate of Brandenburg. For centuries, the House of Hohenzollern ruled Prussia, successfully expanding its size by way of an unusually well-organized and effective army. Prussia shaped the history...
, the largest state of Germany, Communist Party of Germany
Communist Party of Germany
The Communist Party of Germany was a major political party in Germany between 1918 and 1933, and a minor party in West Germany in the postwar period until it was banned in 1956...
(KPD), which referred to the Nazis
Nazism
Nazism, the common short form name of National Socialism was the ideology and practice of the Nazi Party and of Nazi Germany...
as "working people's comrades", united with them in unsuccessful attempt to bring down the state government of SPD by means of a plebiscite. German Communists continued to deny any essential difference between Nazism and Social Democracy even after elections in 1933
German election, 1933
The German federal election, March 1933 to the Reichstag of the Weimar Republic was held on 5 March 1933. The Nazis registered a large increase in votes again emerging as the largest party by far, nevertheless they failed to obtain absolute majority...
. The KPD, under the leadership of Ernst Thälmann
Ernst Thälmann
Ernst Thälmann was the leader of the Communist Party of Germany during much of the Weimar Republic. He was arrested by the Gestapo in 1933 and held in solitary confinement for eleven years, before being shot in Buchenwald on Adolf Hitler's orders in 1944...
, coined the slogan "After Hitler, our turn!" – strongly believing that united front against Nazis wasn't needed, and that the workers would change their opinion and recognize that Nazism, unlike Communism, didn't offer a true way out of Germany's difficulties. See also: Wilhelm Hoegner
Wilhelm Hoegner
Wilhelm Hoegner was the second Bavarian prime minister after World War II and father of the Bavarian constitution. He has been the only Social Democrat to hold this office....
and Walter Kolbenhoff
Walter Kolbenhoff
Walter Kolbenhoff, born as Walter Hoffman , was a German novelist.-Biography:Kolbenhoff was born in Berlin, the son of a workman. He became a worker himself and travelled as a vagabond throughout Europe, Turkey and northern Africa...
.

After Adolf Hitler
Adolf Hitler
Adolf Hitler was an Austrian-born German politician and the leader of the National Socialist German Workers Party , commonly referred to as the Nazi Party). He was Chancellor of Germany from 1933 to 1945, and head of state from 1934 to 1945...
's Nazis came to power in Germany, the KPD was outlawed and thousands of its members, including Thälmann, were arrested. Following these events, the Comintern did a complete turn on the question of alliance with social democrats, and the theory of "social fascism" was abandoned. At the Seventh Congress of the Comintern in 1935, Georgi Dimitrov
Georgi Dimitrov
Georgi Dimitrov Mikhaylov , also known as Georgi Mikhaylovich Dimitrov , was a Bulgarian Communist politician...
outlined the new policy of the "popular front
Popular front
A popular front is a broad coalition of different political groupings, often made up of leftists and centrists. Being very broad, they can sometimes include centrist and liberal forces as well as socialist and communist groups...
" in his address, "For the Unity of the Working Class Against Fascism." The "popular front" period ended in 1939 with the conclusion of the Nazi-Soviet Pact.

Leon Trotsky
Leon Trotsky
Leon Trotsky , born Lev Davidovich Bronshtein, was a Russian Marxist revolutionary and theorist, Soviet politician, and the founder and first leader of the Red Army....
argued against the accusations of "Social Fascism". In the Bulletin of the Opposition of March 1932 he declared:

"Worker-Communists, you are hundreds of thousands, millions; you cannot leave for anyplace; there are not enough passports for you. Should fascism come to power, it will ride over your skulls and spines like a terrific tank. Your salvation lies in merciless struggle. And only a fighting unity with the Social Democratic workers can bring victory. Make haste, worker-Communists, you have very little time left!"
For a Workers' United Front Against Fascism B.O. No. 32

However, in the same essay, Trotsky made it clear that any cooperation with the social democrats was only tactical and temporary, and that in the final analysis, the social democracy would have to be defeated and subverted by the revolutionary faction:

"The front must now be directed against fascism. And this common front of direct struggle against fascism, embracing the entire proletariat, must be utilized in the struggle against the Social Democracy, directed as a flank attack, but no less effective for all that...
"No common platform with the Social Democracy, or with the leaders of the German trade unions, no common publications, banners, placards! March separately, but strike together! Agree only how to strike, whom to strike, and when to strike! Such an agreement can be concluded even with the devil himself...
"No retraction of our criticism of the Social Democracy. No forgetting of all that has been. The whole historical reckoning, including the reckoning for Karl Liebknecht
Karl Liebknecht
was a German socialist and a co-founder with Rosa Luxemburg of the Spartacist League and the Communist Party of Germany. He is best known for his opposition to World War I in the Reichstag and his role in the Spartacist uprising of 1919...
and Rosa Luxemburg
Rosa Luxemburg
Rosa Luxemburg was a Marxist theorist, philosopher, economist and activist of Polish Jewish descent who became a naturalized German citizen...
, will be presented at the proper time, just as the Russian Bolsheviks finally presented a general reckoning to the Menshevik
Menshevik
The Mensheviks were a faction of the Russian revolutionary movement that emerged in 1904 after a dispute between Vladimir Lenin and Julius Martov, both members of the Russian Social-Democratic Labour Party. The dispute originated at the Second Congress of that party, ostensibly over minor issues...
s and Social Revolutionaries
Socialist-Revolutionary Party
thumb|right|200px|Socialist-Revolutionary election poster, 1917. The caption in red reads "партия соц-рев" , short for Party of the Socialist Revolutionaries...
for the baiting, calumny, imprisonment and murder of workers, soldiers, and peasants."

"In his pamphlet on the question, How will National Socialism be Defeated?, Trotsky gives always but one reply: 'The German Communist Party must make a bloc with the social democracy...' In framing this bloc, Trotsky sees the only way for completely saving the German working class against fascism. Either the Communist Party will make a bloc with the social democracy or the German working class is lost for 10-20 years. This is the theory of a completely ruined fascist and counter revolutionary. This theory is the worst theory, the most dangerous theory and the most criminal that Trotsky has constructed in the last years of his counter revolutionary propaganda."