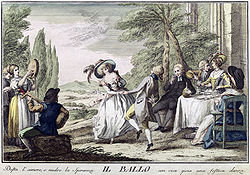 Social dance is a major category or classification of dance
Dance
Dance is an art form that generally refers to movement of the body, usually rhythmic and to music, used as a form of expression, social interaction or presented in a spiritual or performance setting....
forms or dance styles, where sociability and socializing are the primary focuses of the dancing. Social dances can be danced with a variety of partners and still be led and followed in a relaxed, easy atmosphere.

This compares to other major categories based on purpose:


Many social dances are partner dance
Partner dance
Partner dances are dances whose basic choreography involves coordinated dancing of two partners, as opposed to individuals dancing alone or individually in a non-coordinated manner, and as opposed to groups of people dancing simultaneously in a coordinated manner.In the year 1023 the German poet...
s. In fact, quite often when spoken about social dances, ballroom or other partner dances are kept in mind. However it is natural to include in this category such groups of dances as circle dance
Circle dance
"Circle dance" is the most common name for a style of traditional dance usually done in a circle without partners to musical accompaniment.-Description:...
s, line dance
Line dance
A line dance is a choreographed dance with a repeated sequence of steps in which a group of people dance in one or more lines or rows without regard for the gender of the individuals, all facing the same direction, and executing the steps at the same time. Line dancers are not in physical contact...
s, novelty dances, or simply club dancing in solo.

There may be aspects of any of the above dance forms that are either competitive or performance-oriented in nature.