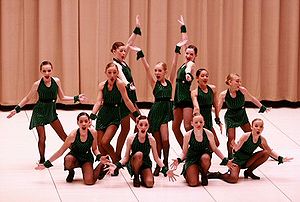 Competitive dance is a popular, widespread activity in which competitors perform dances in any of several permitted dance styles—such as acro
Acro dance
Acro dance is a style of dance that combines classical dance technique with precision acrobatic elements. It is defined by its athletic character, its unique choreography, which seamlessly blends dance and acrobatics, and its use of acrobatics in a dance context...
, ballet
Ballet
Ballet is a type of performance dance, that originated in the Italian Renaissance courts of the 15th century, and which was further developed in France and Russia as a concert dance form. The early portions preceded the invention of the proscenium stage and were presented in large chambers with...
, jazz
Jazz dance
Jazz dance is a classification shared by a broad range of dance styles. Before the 1950s, jazz dance referred to dance styles that originated from African American vernacular dance. In the 1950s, a new genre of jazz dance—modern jazz dance—emerged, with roots in Caribbean traditional dance...
, hip-hop, lyrical
Lyrical dance
Lyrical dance is a fusion of ballet with jazz and contemporary dance techniques.You can also get lyrical gymnastics which is gymnastics to music. It has a dance influence to it....
, modern, and tap
Tap dance
Tap dance is a form of dance characterized by using the sound of one's tap shoes hitting the floor as a percussive instrument. As such, it is also commonly considered to be a form of music. Two major variations on tap dance exist: rhythm tap and Broadway tap. Broadway tap focuses more on the...
—before a common group of judges. This is in contrast with other activities that involve competition among dancers based on purpose, or specific dance style, such as pom squad, ballroom
Ballroom dance
Ballroom dance refers to a set of partner dances, which are enjoyed both socially and competitively around the world. Because of its performance and entertainment aspects, ballroom dance is also widely enjoyed on stage, film, and television....
, sequence, latin, ceremonial
Ceremonial dance
Ceremonial dance is a major category or classification of dance forms or dance styles, where the purpose is ceremonial or ritualistic.This compares to other major dance categories based on purpose:* Celebration dance** Festival dance...
, and highland
Scottish highland dance
The term Highland dance or Highland dancing is used today to refer to a style of athletic solo dancing which developed in the Gaelic Highlands of Scotland...
dance.

A routine is the dance that is performed by a dancer or group of dancers at a competition. Each routine is required to be entered into an appropriate category at every competition. A number of factors determine the category into which a routine should be entered:

The music
Music
Music is an art form whose medium is sound and silence. Its common elements are pitch , rhythm , dynamics, and the sonic qualities of timbre and texture...
used in competitive dance routines is typically adapted from commercially available songs created by professional recording artists. Dance routines are subject to time limits at most dance competitions, and consequently the original, commercial music is usually edited to conform to such time limits.

At some competitions, the dance competition music is adjudicated in terms of its appropriateness for the ages of the performers as well as the character of the dance routine. The quality of the music, however, is not explicitly judged. Even so, dance competition music is an integral part of a dancer's performance, so dancers will sometimes employ professional music editing services in order to obtain high quality music—and thus a competitive edge—for their dance routines.

Dance routines may be performed without accompanying music. Although rare, this approach is most commonly employed in tap routines in order to feature the sound and rhythm of the dancer's tap shoes.

The judges
Adjudicator
An adjudicator is someone who presides, judges and arbitrates during a formal dispute. The term adjudicator essentially means a judge, without invoking the legal term. An ombudsman is a type of adjudicator in local government in the United Kingdom....
at a dance competition are typically professional dancers. They sit at the front of the audience, facing the stage, and observe all of the dances. Each judge completes a scoresheet for each routine by awarding points for various categories. Judges may also write comments on their scoresheets or, in some cases, record audio comments on CD or DVD media, for the benefit of dancers and their choreographers.

Adjudication categories vary at different competitions, but commonly judged categories cover aspects such as showmanship
Showmanship (performing)
Showmanship, concerning artistic performing such as in Theatre, is the skill of performing in such a manner that will appeal to an audience or aid in conveying the performance's essential theme or message....
, technique (i.e., proper form, execution of movements, transitions), difficulty of the routine, costume, and choreography
Choreography
Choreography is the art of designing sequences of movements in which motion, form, or both are specified. Choreography may also refer to the design itself, which is sometimes expressed by means of dance notation. The word choreography literally means "dance-writing" from the Greek words "χορεία" ...
. At some competitions, points may be deducted if the costume or music is deemed inappropriate for the age of the dancers. Also, judges may disqualify a routine if it violates any rules of the competition.

The points issued by each judge are totaled to compute the judge's score. Typically, a maximum of 100 points can be awarded by an individual judge (i.e., a perfect score). All of the judges' scores are then added together to produce a final score. At some competitions the lowest and highest judges' scores are discarded before computing the final score. For example, a competition might employ five judges, each of whom may award up to 100 points; when the low and high scores have been discarded, the resulting final score will have a maximum possible value of 300 points.

There is no industry-wide standard for scoring. The maximum number of points issued by each judge, as well as the maximum possible final score, varies among competition production companies. Although it is common for judges to issue a maximum of 100 points each, at least one company implements a system in which judges may issue up to 200 points, based on the rationale that such a scoring system is similar to that employed in public schools. 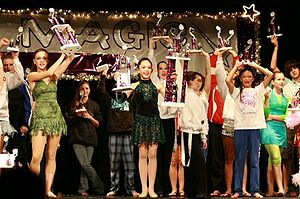 Dance competitions often bestow titles upon select dancers. Depending on the competition, titles may be automatically assigned to the highest scoring dancer in each age category, or an additional pageant may be conducted to determine the title winner. When a pageant is conducted, contestants are typically required to perform a solo routine, model their costumes, introduce themselves to the audience, give a short speech, be interviewed, or some combination of these. Titles are typically applicable for one year. For example:

Dance competitions are organized and conducted by independent competition production companies. There are approximately 200 such companies operating in the United States and Canada alone. Competition production companies move from one metropolitan area
Metropolitan area
The term metropolitan area refers to a region consisting of a densely populated urban core and its less-populated surrounding territories, sharing industry, infrastructure, and housing. A metropolitan area usually encompasses multiple jurisdictions and municipalities: neighborhoods, townships,...
to another, stopping for a few days in each area to conduct a regional competition. By touring in this manner, these companies are able to generate profits while at the same time enabling significant numbers of dancers to attend local competitions. Some companies also conduct one or more national competitions after their regional tours have ended.

The competitive dance industry has no oversight body or standards organization, although at least one effort is underway to establish a limited set of competition rules and safety standards in the industry. Competition production companies seldom coordinate their tours with each other. Tour start and end dates, as well as cities visited, vary from one company to another. Most companies conduct regional tours from approximately January through May, while National competitions generally run from June through August. It is not uncommon for two regional tours to be visiting the same metropolitan area at the same time.

Regional competitions are held at high school auditoriums or other performance venues that include a stage and space for judges and audience. Such venues are typically rented for periods ranging from one to four consecutive days, depending on the number of dancers scheduled to compete. Competitions often start very early in the morning and last until late at night so as to minimize rental cost and other expenses.

The duration of a competition event is dictated by the number, and types, of dance routines that are scheduled to compete. In addition to the time needed for dance performances—which represents the majority of the total event time—additional time is allotted for judging, score tabulation and awards ceremonies.

Dancers are required to be at the competition venue during their performances and, in most cases, at the associated awards ceremonies as well. In addition, dance schools require their dancers to arrive no later than a specified time (i.e., the call time). Dancer call times are generally well before their scheduled performance times because:

The choreography of a dance routine—which is the design of movement and flow of steps in the routine—is copyrightable. Consequently, video recording is often prohibited at dance competitions in order to steer clear of copyright infringement issues. Some competition production companies employ professional videographers to capture and sell video recordings of competitive performances with the restriction that video recordings may only be sold to the subject performers or members of their studios, thus avoiding infringement. When no professional videographer is available, competition production companies will sometimes permit each attending dance school to designate a videographer to record performances of students from that school.

Dance conventions are regional educational events hosted by professional dancers. They are held on weekends in large cities nationwide—typically in hotel ballrooms—with a stage for instructors to teach from. Many conventions also hold competitions so that attendees can have their routines critiqued by dance professionals.

Instructors at dance conventions are usually experts in the field of dance and are either currently working in the industry (e.g., music videos, films, commercials, industrials, concerts, Broadway) or have in the past. These professionals sometimes teach at well-known dance studios in Los Angeles or New York, such as The Edge, The Millennium, Broadway Dance Center
Broadway Dance Center
Broadway Dance Center, located in the heart of Times Square in New York City, was founded in 1984 a "drop-in" dance training schools in the world, offering over 200 classes a week in Jazz, Tap, Ballet, Hip Hop, Theater and more...
, and Steps on Broadway.

Dance schools participate in dance conventions to learn from the professional dancers who host them. Conventions are a means for dance teachers and students to learn new technique, and styles of dance from New York City and Los Angeles, without incurring the expense of traveling to distant cities.

Although the highest scoring dancers are ranked according to their overall scores, dance schools and competition production companies emphasize that dancers are primarily competing against themselves, and thus competitive dance is not so much about competing, but rather is an opportunity to:


Dancers are expected to conform to proper etiquette at competitions. They are expected to be courteous to each other, to applaud other routines, to not enter or exit the auditorium during a performance, etc. Aside from these standard rules of etiquette, many competition companies impose additional rules. For example, American Dance Awards requires all dancers to say "thank-you" when presented with an award.

Many dance schools attend competitions and so dancers from different schools may see each other many times during the competition season. This creates a sense of community as well as valuable connections should a student decide to become a professional dancer.