In the year 1023 the German poet Ruodlieb
Ruodlieb
Ruodlieb is a fragmentary romance in Latin verse written by an unknown southern German poet who flourished about 1030. He was almost certainly a monk of the Bavarian abbey of Tegernsee....
referred to a couple dance with a basic motif of a boy wooing a girl, and the girl repulsing his advances. Men and women dancing as couples, both holding one hand of their partner, and "embracing" each other, can be seen in illustrations from 15th century Germany.

At the end of the 13th century, and during the 14th century, nobles and wealthy patricians danced as couple in procession in a slow dignified manner in a circle. Farmers and lower classes of society danced turning in a lively, springing fashion. The relatively new burgher middle class
Middle class
The middle class is any class of people in the middle of a societal hierarchy. In Weberian socio-economic terms, the middle class is the broad group of people in contemporary society who fall socio-economically between the working class and upper class....
combined the dances with the processional as a "fore dance", and the turning as an "after dance".

Danse de Paysans' (Peasant's Dance) by Théodore de Bry (1528-1598) shows a couple with a man lifting his partner off the ground, and the man pulling the woman towards him while holding her closely with both arms. His Danse de Seigneurs et Dames (Dance of the Lords and Ladies) features one Lord with his arms around the waist of his Lady.

An old couple dance which can be found all over Northern Europe is known as "Manchester" or "Lott is Dead". In Bavaria words to the music include "One, two, three and one is four, Dianderl lifts up her skirt And shows me her knees", and in Bavaria one verse invites the girl to leave her bedroom window open to allow a visit from her partner.

Dance partners stay together for the duration of the dance and, most often, dance independently of other couples dancing at the same time, if any.

Although this kind of dancing can be seen, for instance, in ballet, this term is usually applied to various forms of social dance
Social dance
Social dance is a major category or classification of danceforms or dance styles, where sociability and socializing are the primary focuses of the dancing...
, ballroom dance
Ballroom dance
Ballroom dance refers to a set of partner dances, which are enjoyed both socially and competitively around the world. Because of its performance and entertainment aspects, ballroom dance is also widely enjoyed on stage, film, and television....
, folk dance
Folk dance
The term folk dance describes dances that share some or all of the following attributes:*They are dances performed at social functions by people with little or no professional training, often to traditional music or music based on traditional music....
, and similar forms.

Partner dance may be a basis of a formation dance
Formation dance
Formation dance is a style of ballroom dancing. It is pattern or shadow team dancing by couples in a formation team. The choreography may be based on a particular dance or a medley of dances...
, a round dance
Round dance
There are two distinct dance categories called round dance. The specific dances belonging to the first of these categories are often considered to be ethnic, folk or country dances...
, a square dance
Square dance
Square dance is a folk dance with four couples arranged in a square, with one couple on each side, beginning with Couple 1 facing away from the music and going counter-clockwise until getting to Couple 4. Couples 1 and 3 are known as the head couples, while Couples 2 and 4 are the side couples...
or a sequence dance
Sequence dance
Sequence dancing is a form of dance in which a preset pattern of movements is followed, usually to music which is also predetermined. Sequence dancing may include dances of many different styles. The term may include ballroom dances which move round the floor as well as line, square and circle...
. These are kinds of group dance
Group dance
Group dances are danced by groups of people simultaneously, as opposed to individuals dancing alone or individually, and as opposed to couples dancing together but independently of others dancing at the same time, if any....
where the dancers form couples and dance either the same pre-choreographed or called routines or routines within a common choreography— routines that control both how each couple dances together and how each couple moves in accord with other couples. In square dance one will often change partners during the course of a dance, in which case one distinguishes between the "original partner" and a "situational partner".

In many partner dances, one, typically a man, is the leader; the other, typically a woman, is the follower. As a rule, they maintain connection with each other. In some dances the connection is loose and called dance handhold. In other dances the connection involves body contact. In the latter case the connection imposes significant restrictions on relative body positions during the dance and hence it is often called dance frame
Frame (dance)
Frame is the body shape maintained by dancers during partner dancing. Specifically, frame refers to the shape of the upper body of the dancers relative to the rest of the dancer's body and the body of the dancer's partner....
. It is also said that each partner has his own dance frame. Although the handhold connection poses almost no restriction on body positions, it is quite helpful that the partners are aware of their dance frames, since this is instrumental in leading and following
Lead and follow (dance)
In partner dancing, the two dance partners are never equal. One must be the Lead and the other will be the Follow.The Lead is responsible for choosing appropriate steps to suit the music , and leading the Follow by hand pressure and signals to complete the chosen steps smoothly and safely...
.

Some peoples have folk partner dances, where partners do not have any body contact at all, but there is still a kind of "call-response" interaction.

A popular form of partner dancing is slow dance
Slow dance
A slow dance is a type of partner dance in which a couple dance slowly, swaying to the music. This is usually done to very slow-beat songs."Slow dancing" can refer to any slow couple dance , but is often associated with a particular, simple style of dance performed by middle school and high school...
. 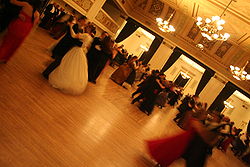 Partner dances with partners of the same sex

Traditionally, partner dance has taken place between a man and a woman. Often, when there are not sufficient partners of the opposite sex available, couples will form into pairs of the same-sex.

Social clubs have been formed by the LGBT community involving social partner dance between members of the same-sex. Partnerships of the same-sex may not describe sexual orientation, however. At Modern Jive
Modern Jive
Modern Jive is a dance style derived from Swing, Lindy Hop, Rock and Roll, Salsa and others, the main innovation being to simplify the footwork - by removing syncopation such as chasse. The term French Jive is occasionally used instead, reflecting the origins of the style...
and West Coast Swing
West Coast Swing
West Coast Swing is a partner dance with roots in Lindy Hop. It is characterized by a distinctive elastic look that results from its basic extension-compression technique of partner connection, and is danced primarily in a slotted area on the dance floor...
events, females will regularly partner each other. Men dancing with each other is also common, though less frequent, but is not just done for the "comedy value" as men may equally enjoy the role of follower.

Typically, in ballroom competitions, same-sex partnerships are allowed up to the silver level (the third level in competition, after newcomer and bronze). However, these are comparatively rare.

This kind of dance involves dancing of three persons together: one man with two women or one woman with two men. In social dancing
Social dance
Social dance is a major category or classification of danceforms or dance styles, where sociability and socializing are the primary focuses of the dancing...
, double partnering is best known during times when a significant demographic disproportion happens between the two sexes. For example, this happens during wars: in the army there is a lack of women, while among civilians able dancers are mostly women.

Since 1980s, double partner dance is often performed in Ceroc
Ceroc
Ceroc is a partner dance best described as a fusion of Salsa and Jive, but without the complicated footwork. It is derived from many other dances including French Jive, Swing, Lindy Hop, and Rock and Roll, the main change being simplified footwork which makes it more accessible to beginners.The...
, Hustle
Hustle (dance)
The Hustle is a catchall name for several disco dances which were extremely popular in the 1970s. Today it mostly refers to the unique partner dance done in ballrooms and nightclubs to disco music. It has some features in common with swing dance. Its basic steps are somewhat similar to the...
, Salsa
Salsa (dance)
Salsa is a syncretic dance form with origins in Cuba as the meeting point of Spanish and African cultures.Salsa is normally a partner dance, although there are recognized solo forms such as solo dancing "suelta" and "Rueda de Casino" where multiple couples exchange partners in a circle...
and Swing
Swing (dance)
"Swing dance" is a group of dances that developed with the swing style of jazz music in the 1920s-1950s, although the earliest of these dances predate swing jazz music. The best known of these dances is the Lindy Hop, a popular partner dance that originated in Harlem and is still danced today...
dance communities, experienced leaders leading two followers.

There are a number of folk dances that feature this setup. Among these are the Russian Troika
Troika (dance)
Troika is a Russian folk dance, where a man dances with two women. The Russian word troika means three-horse team/gear. In the Russian dance the dancers imitate the prancing of horses pulling a sled or a carriage....
and the Polish Trojak
Trojak
Trojak is a Silesian folk dance. It is a double partner dance and performed in groups of three: one male dancer and two female dancers. The music of the dance has two parts: a slow one in 3/4 metre and a fast one in 2/4 metre...
folk dances, where a man dances with two or more women. A Cajun dance with the name Troika is also known.