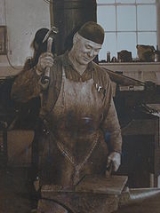 Encyclopedia
A metalsmith, often shortened to smith, is a person involved in making metal
Metal
A metal , is an element, compound, or alloy that is a good conductor of both electricity and heat. Metals are usually malleable and shiny, that is they reflect most of incident light...
objects. In contemporary use a metalsmith is a person who uses metal as a material, uses traditional metalsmithing techniques (though not necessarily the material), whose work thematically relates to the practice or history of the practice, or who engages in any number metal related activities.

The English
English language
English is a West Germanic language that arose in the Anglo-Saxon kingdoms of England and spread into what was to become south-east Scotland under the influence of the Anglian medieval kingdom of Northumbria...
word smith is cognate
Cognate
In linguistics, cognates are words that have a common etymological origin. This learned term derives from the Latin cognatus . Cognates within the same language are called doublets. Strictly speaking, loanwords from another language are usually not meant by the term, e.g...
with the somewhat archaic word, "smite", which means "to hit" or "to strike". Originally, smiths were craftsmen who shaped or formed metal with hammer blows. However, the old etymological guess of "smite" as the source of "smith" is without foundation. The word smith derives from an old Teutonic word, smeithan, to forge. The root is seen in the Greek word , a burin
Burin
Burin from the French burin meaning "cold chisel" has two specialised meanings for types of tools in English, one meaning a steel cutting tool which is the essential tool of engraving, and the other, in archaeology, meaning a special type of lithic flake with a chisel-like edge which was probably...
.

As an English suffix
Suffix
In linguistics, a suffix is an affix which is placed after the stem of a word. Common examples are case endings, which indicate the grammatical case of nouns or adjectives, and verb endings, which form the conjugation of verbs...
, -smith connotes a meaning of specialized craftsmen — for example, wordsmith and tunesmith are nouns synonymous with writer
Writer
A writer is a person who produces literature, such as novels, short stories, plays, screenplays, poetry, or other literary art. Skilled writers are able to use language to portray ideas and images....
or songwriter
Songwriter
A songwriter is an individual who writes both the lyrics and music to a song. Someone who solely writes lyrics may be called a lyricist, and someone who only writes music may be called a composer...
, respectively.

In pre-industrialized times, smiths held high or special social standing since they supplied the metal tool
Tool
A tool is a device that can be used to produce an item or achieve a task, but that is not consumed in the process. Informally the word is also used to describe a procedure or process with a specific purpose. Tools that are used in particular fields or activities may have different designations such...
s needed for farming (especially the plough
Plough
The plough or plow is a tool used in farming for initial cultivation of soil in preparation for sowing seed or planting. It has been a basic instrument for most of recorded history, and represents one of the major advances in agriculture...
) and warfare. This was especially true in some West Africa
West Africa
West Africa or Western Africa is the westernmost region of the African continent. Geopolitically, the UN definition of Western Africa includes the following 16 countries and an area of approximately 5 million square km:-Flags of West Africa:...
n cultures. 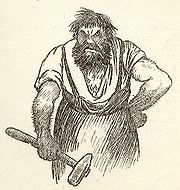 Types of smiths include:

The ancient traditional tool of the smith is a forge
Forge
A forge is a hearth used for forging. The term "forge" can also refer to the workplace of a smith or a blacksmith, although the term smithy is then more commonly used.The basic smithy contains a forge, also known as a hearth, for heating metals...
or smithy, which is a furnace
Furnace
A furnace is a device used for heating. The name derives from Latin fornax, oven.In American English and Canadian English, the term furnace on its own is generally used to describe household heating systems based on a central furnace , and sometimes as a synonym for kiln, a device used in the...
designed to allow compressed air (through a bellows
Bellows
A bellows is a device for delivering pressurized air in a controlled quantity to a controlled location.Basically, a bellows is a deformable container which has an outlet nozzle. When the volume of the bellows is decreased, the air escapes through the outlet...
) to superheat the inside, allowing for efficient melting, soldering
Soldering
Soldering is a process in which two or more metal items are joined together by melting and flowing a filler metal into the joint, the filler metal having a lower melting point than the workpiece...
and annealing
Annealing (metallurgy)
Annealing, in metallurgy and materials science, is a heat treatment wherein a material is altered, causing changes in its properties such as strength and hardness. It is a process that produces conditions by heating to above the recrystallization temperature, maintaining a suitable temperature, and...
of metals. Today, this tool is still widely used by blacksmiths as it was traditionally.

The term, metalsmith, often refers to artisans and craftpersons who practice their craft in many different metals, including gold, copper and silver. Jewelers often refer to their craft as metalsmithing, and many universities offer degree programs in metalsmithing, jewelry, enameling and blacksmithing under the auspices of their fine arts programs.

Machinist
Machinist
A machinist is a person who uses machine tools to make or modify parts, primarily metal parts, a process known as machining. This is accomplished by using machine tools to cut away excess material much as a woodcarver cuts away excess wood to produce his work. In addition to metal, the parts may...
s are metalsmiths who produce high-precision parts and tools. The most advanced of these tools, CNC machines, are computer controlled and largely automated.