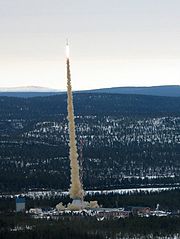 Skylark was a British sounding rocket
Sounding rocket
A sounding rocket, sometimes called a research rocket, is an instrument-carrying rocket designed to take measurements and perform scientific experiments during its sub-orbital flight. The origin of the term comes from nautical vocabulary, where to sound is to throw a weighted line from a ship into...
design. The Skylark was first launched in 1957 from Woomera
Woomera, South Australia
The town, or village, of Woomera is located in the south east corner of the Woomera Prohibited Area ; colloquially known as the Woomera Rocket Range...
, Australia
Australia
Australia , officially the Commonwealth of Australia, is a country in the Southern Hemisphere comprising the mainland of the Australian continent, the island of Tasmania, and numerous smaller islands in the Indian and Pacific Oceans. It is the world's sixth-largest country by total area...
and its 441st and final launch took place from Esrange
Esrange
Esrange Space Center is a rocket range and research centre located outside the town of Kiruna in northern Sweden. It is a base for scientific research with high altitude balloons, investigation of the aurora borealis, sounding rocket launches, and satellite tracking, among other things...
, Sweden
Sweden
Sweden , officially the Kingdom of Sweden , is a Nordic country on the Scandinavian Peninsula in Northern Europe. Sweden borders with Norway and Finland and is connected to Denmark by a bridge-tunnel across the Öresund....
on 2 May 2005. Launches had been carried out from sites in Europe, Australia, and South America, with use far beyond the UK by NASA
NASA
The National Aeronautics and Space Administration is the agency of the United States government that is responsible for the nation's civilian space program and for aeronautics and aerospace research...
, the European Space Research Organisation (ESRO
ESRO
The European Space Research Organization was an international organisation founded by 10 European nations with the intention of jointly pursuing scientific research in space. It was founded in 1964...
), and German
German Aerospace Center
The German Aerospace Center is the national centre for aerospace, energy and transportation research of the Federal Republic of Germany. It has multiple locations throughout Germany. Its headquarters are located in Cologne. It is engaged in a wide range of research and development projects in...
and Swedish
Swedish Space Corporation
The Swedish Space Corporation is a comprehensive space company covering the entire field, from the definition of innovative business concepts and space projects to the development, tests and operation of the systems....
space organizations.

The design first dates to 1955, when initial work was carried out by the Royal Aircraft Establishment
Royal Aircraft Establishment
The Royal Aircraft Establishment , was a British research establishment, known by several different names during its history, that eventually came under the aegis of the UK Ministry of Defence , before finally losing its identity in mergers with other institutions.The first site was at Farnborough...
at Farnborough
Farnborough Airfield
Farnborough Airport or TAG London Farnborough Airport is an airport situated in Farnborough, Rushmoor, Hampshire, England...
and the Rocket Propulsion Establishment
Rocket Propulsion Establishment
The Rocket Propulsion Establishment at Westcott, Buckinghamshire on the site of the former RAF Westcott has made a number of notable contributions in the field of rocket propulsion, including input on the rocket design for the Blue Streak missile and the propulsion systems on Chevaline...
at Westcott. The first vehicles were ready less than two years later, and sent for testing to Woomera during the International Geophysical Year
International Geophysical Year
The International Geophysical Year was an international scientific project that lasted from July 1, 1957, to December 31, 1958. It marked the end of a long period during the Cold War when scientific interchange between East and West was seriously interrupted...
.

During the 1960s Skylark evolved into an excellent platform for space astronomy, with its ability to point at the Sun
Sun
The Sun is the star at the center of the Solar System. It is almost perfectly spherical and consists of hot plasma interwoven with magnetic fields...
, Moon
Moon
The Moon is Earth's only known natural satellite,There are a number of near-Earth asteroids including 3753 Cruithne that are co-orbital with Earth: their orbits bring them close to Earth for periods of time but then alter in the long term . These are quasi-satellites and not true moons. For more...
, or a star. It was used to obtain the first good-quality X-ray images of the solar corona. Within the UK national programme, the frequency of Skylark launches peaked at 20 in 1965 (from Woomera), with 198 flights between 1957 and 1978.

The first X-ray surveys of the sky in the Southern Hemisphere were provided by Skylark launches. It was also used with high precision in September and October 1972 in an effort to locate the optical counterpart of X-ray source GX3+1 by lunar occultation.

Skylarks were built in some numbers into the 1970s, until the UK government decided to end the programme in 1977, thinking that future "low weight" research would be carried out on the Space Shuttle
Space Shuttle
The Space Shuttle was a manned orbital rocket and spacecraft system operated by NASA on 135 missions from 1981 to 2011. The system combined rocket launch, orbital spacecraft, and re-entry spaceplane with modular add-ons...
instead. The programme was handed to British Aerospace
British Aerospace
British Aerospace plc was a UK aircraft, munitions and defence-systems manufacturer. Its head office was in the Warwick House in the Farnborough Aerospace Centre in Farnborough, Hampshire...
, who later sold it to Matra Marconi Space
Matra Marconi Space
Matra Marconi Space was a Franco-British aerospace company.-History:Matra Marconi Space was established in 1990 as a joint venture between the space and telecommunication divisions of the Lagardère Group and the GEC group .The merged company was announced in December 1989 and was owned 51% by...
, who in 1999 in turn sold it to a small private company, Sounding Rocket Services, based in Bristol
Bristol
Bristol is a city, unitary authority area and ceremonial county in South West England, with an estimated population of 433,100 for the unitary authority in 2009, and a surrounding Larger Urban Zone with an estimated 1,070,000 residents in 2007...
.

Due to its small mass and low thrust, the original version of the Skylark had to be launched from a 25 metres (82 ft) tilting tower to overcome the effects of the wind. Later versions only required a simple trailer.

Skylark Rockets are on display in the following locations: