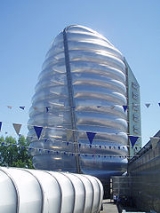 Encyclopedia
The National Space Centre is one of the United Kingdom
United Kingdom
The United Kingdom of Great Britain and Northern IrelandIn the United Kingdom and Dependencies, other languages have been officially recognised as legitimate autochthonous languages under the European Charter for Regional or Minority Languages...
's leading visitor attractions that is devoted to space science and astronomy
Astronomy
Astronomy is a natural science that deals with the study of celestial objects and phenomena that originate outside the atmosphere of Earth...
. It is located in the city of Leicester
Leicester
Leicester is a city and unitary authority in the East Midlands of England, and the county town of Leicestershire. The city lies on the River Soar and at the edge of the National Forest...
, England
England
England is a country that is part of the United Kingdom. It shares land borders with Scotland to the north and Wales to the west; the Irish Sea is to the north west, the Celtic Sea to the south west, with the North Sea to the east and the English Channel to the south separating it from continental...
, next to the River Soar
River Soar
The River Soar is a tributary of the River Trent in the English East Midlands.-Description:It rises near Hinckley in Leicestershire and is joined by the River Sence near Enderby before flowing through Leicester , Barrow-on-Soar, beside Loughborough and Kegworth, before joining the Trent near...
on the A6.

The building was designed by Nicholas Grimshaw
Nicholas Grimshaw
Sir Nicholas Grimshaw, CBE is a prominent English architect, particularly noted for several modernist buildings, including London's Waterloo International railway station and the Eden Project in Cornwall...
, and it opened to the public on 30 June 2001. The tower is 42 metres tall.

The centre arose from a partnership between the University of Leicester
University of Leicester
The University of Leicester is a research-led university based in Leicester, England. The main campus is a mile south of the city centre, adjacent to Victoria Park and Wyggeston and Queen Elizabeth I College....
's Space Research Centre and local government agencies. The total construction cost was £52m, £26m of which came from a Millennium Commission
Millennium Commission
The Millennium Commission in the United Kingdom was set up to aid communities at the end of the 2nd millennium and the start of the 3rd millennium. It used funding raised through the UK National Lottery....
grant, and the rest from private sector
Private sector
In economics, the private sector is that part of the economy, sometimes referred to as the citizen sector, which is run by private individuals or groups, usually as a means of enterprise for profit, and is not controlled by the state...
sponsors. It is run as an educational charity, and offers science workshops for school children of all ages.

The National Space Centre currently has post-doctoral science researchers based at the University of Leicester's Space Research Centre (SRC) and the University of Nottingham's Institute of Engineering Surveying and Space Geodesy (IESSG).

The Centre has on display the only known Soyuz spacecraft
Soyuz spacecraft
Soyuz , Union) is a series of spacecraft initially designed for the Soviet space programme by the Korolyov Design Bureau in the 1960s, and still in service today...
in Western Europe (there is one at the Smithsonian Institution
Smithsonian Institution
The Smithsonian Institution is an educational and research institute and associated museum complex, administered and funded by the government of the United States and by funds from its endowment, contributions, and profits from its retail operations, concessions, licensing activities, and magazines...
as part of their Apollo-Soyuz Test Project
Apollo-Soyuz Test Project
-Backup crew:-Crew notes:Jack Swigert had originally been assigned as the command module pilot for the ASTP prime crew, but prior to the official announcement he was removed as punishment for his involvement in the Apollo 15 postage stamp scandal.-Soyuz crew:...
display).
The centre has six main galleries of exhibits and visitor activities covering space flight, astronomy and cosmology. The attraction also includes a Digistar 3
Digistar 3
Digistar 3 is a dome-based projection technology created by Evans & Sutherland - to offer audiences immersive entertainment and education experiences that integrate fulldome video, real time 3D computer graphics, and a digital planetarium facility...
dome cinema and planetarium, a gift shop and a restaurant. The restaurant is ominously situated beneath the two nozzles of the Blue Streak and PGM-17 Thor
PGM-17 Thor
Thor was the first operational ballistic missile of the U.S. Air Force . Named after the Norse god of thunder, it was deployed in the United Kingdom between 1959 and September 1963 as an intermediate range ballistic missile with thermonuclear warheads. Thor was in height and in diameter. It was...
rockets.

The Centre's own digital visualisation team, NSC Creative, make all the "fulldome" planetarium shows shown at the Centre. At present, NSC Creative fulldome shows are playing in over 150 planetaria in 20 countries worldwide. These productions include the official International Year of Astronomy (IYA2009) planetarium show "We are Astronomers" which was funded by the UK Science and Technology Facilities Council (STFC)

The failed Beagle 2
Beagle 2
Beagle 2 was an unsuccessful British landing spacecraft that formed part of the European Space Agency's 2003 Mars Express mission. All contact with it was lost upon its separation from the Mars Express six days before its scheduled entry into the atmosphere...
Mars
Mars
Mars is the fourth planet from the Sun in the Solar System. The planet is named after the Roman god of war, Mars. It is often described as the "Red Planet", as the iron oxide prevalent on its surface gives it a reddish appearance...
spacecraft was controlled from the centre's Landing Operations Control Centre. UK Government's official Near-Earth object
Near-Earth object
A near-Earth object is a Solar System object whose orbit brings it into close proximity with the Earth. All NEOs have a perihelion distance less than 1.3 AU. They include a few thousand near-Earth asteroids , near-Earth comets, a number of solar-orbiting spacecraft, and meteoroids large enough to...
(NEO) Information Centre is also based at the centre.

Apollo program astronaut Buzz Aldrin
Buzz Aldrin
Buzz Aldrin is an American mechanical engineer, retired United States Air Force pilot and astronaut who was the Lunar Module pilot on Apollo 11, the first manned lunar landing in history...
visited the Space Centre in June 2005.
The first Star Wars Day was held on 30 July 2005. Due to the popularity of this event, Star Wars
Star Wars
Star Wars is an American epic space opera film series created by George Lucas. The first film in the series was originally released on May 25, 1977, under the title Star Wars, by 20th Century Fox, and became a worldwide pop culture phenomenon, followed by two sequels, released at three-year...
weekend was held on 12 November and 13 November 2005. The centre hosted a Doctor Who
Doctor Who
Doctor Who is a British science fiction television programme produced by the BBC. The programme depicts the adventures of a time-travelling humanoid alien known as the Doctor who explores the universe in a sentient time machine called the TARDIS that flies through time and space, whose exterior...
exhibition from 22 November 2005 to 8 January 2006. A Sci-Fi Weekend on the weekend beginning 17 June 2006 included a live-action experience similar to Alien War
Alien War
Alien War was a "total reality" experience in the United Kingdom that originally opened at the Arches in Glasgow in April 1992 themed around the Alien series of films...
.
On 19 July 2006 NASA
NASA
The National Aeronautics and Space Administration is the agency of the United States government that is responsible for the nation's civilian space program and for aeronautics and aerospace research...
astronaut Brian Duffy visited and told people about his trip to space. More recently the National Space Centre hosted a UK tour of the NASA STS-121
STS-121
STS-121 was a space shuttle mission to the International Space Station flown by Space Shuttle Discovery. The main purposes of the mission were to test new safety and repair techniques introduced following the Columbia disaster of February 2003 as well as to deliver supplies, equipment and...
crew, including UK born Piers Sellers
Piers Sellers
Piers John Sellers OBE is a British-born Anglo-American meteorologist and a NASA astronaut. He is a veteran of three space shuttle missions....
. The crew spoke to MPs, industry leaders and school children about the UK Space Industry. Many of the children who met the crew said they were inspired to consider science and technology as a further education topic.

In 2007 the National Space Centre celebrated 50 Years in Space: the anniversary of the first satellite, Sputnik.