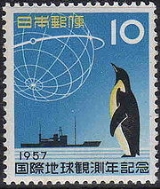 Encyclopedia
The International Geophysical Year (IGY) was an international scientific project that lasted from July 1, 1957, to December 31, 1958. It marked the end of a long period during the Cold War
Cold War
The Cold War was the continuing state from roughly 1946 to 1991 of political conflict, military tension, proxy wars, and economic competition between the Communist World—primarily the Soviet Union and its satellite states and allies—and the powers of the Western world, primarily the United States...
when scientific interchange between East and West was seriously interrupted. All major countries took part with the exception of mainland China
China
Chinese civilization may refer to:* China for more general discussion of the country.* Chinese culture* Greater China, the transnational community of ethnic Chinese.* History of China* Sinosphere, the area historically affected by Chinese culture...
and the Republic of China
Republic of China
The Republic of China , commonly known as Taiwan , is a unitary sovereign state located in East Asia. Originally based in mainland China, the Republic of China currently governs the island of Taiwan , which forms over 99% of its current territory, as well as Penghu, Kinmen, Matsu and other minor...
(Taiwan) (in view of their political stalemate).

The IGY encompassed 11 Earth science
Earth science
Earth science is an all-embracing term for the sciences related to the planet Earth. It is arguably a special case in planetary science, the Earth being the only known life-bearing planet. There are both reductionist and holistic approaches to Earth sciences...
s: aurora and airglow
Airglow
Airglow is the very weak emission of light by a planetary atmosphere. In the case of Earth's atmosphere, this optical phenomenon causes the night sky to never be completely dark .-Development:The airglow phenomenon was first identified in 1868 by Swedish scientist...
, cosmic ray
Cosmic ray
Cosmic rays are energetic charged subatomic particles, originating from outer space. They may produce secondary particles that penetrate the Earth's atmosphere and surface. The term ray is historical as cosmic rays were thought to be electromagnetic radiation...
s, geomagnetism
Earth's magnetic field
Earth's magnetic field is the magnetic field that extends from the Earth's inner core to where it meets the solar wind, a stream of energetic particles emanating from the Sun...
, gravity, ionospheric physics
Ionosphere
The ionosphere is a part of the upper atmosphere, comprising portions of the mesosphere, thermosphere and exosphere, distinguished because it is ionized by solar radiation. It plays an important part in atmospheric electricity and forms the inner edge of the magnetosphere...
, longitude
Longitude
Longitude is a geographic coordinate that specifies the east-west position of a point on the Earth's surface. It is an angular measurement, usually expressed in degrees, minutes and seconds, and denoted by the Greek letter lambda ....
and latitude
Latitude
In geography, the latitude of a location on the Earth is the angular distance of that location south or north of the Equator. The latitude is an angle, and is usually measured in degrees . The equator has a latitude of 0°, the North pole has a latitude of 90° north , and the South pole has a...
determinations (precision mapping), meteorology
Meteorology
Meteorology is the interdisciplinary scientific study of the atmosphere. Studies in the field stretch back millennia, though significant progress in meteorology did not occur until the 18th century. The 19th century saw breakthroughs occur after observing networks developed across several countries...
, oceanography
Oceanography
Oceanography , also called oceanology or marine science, is the branch of Earth science that studies the ocean...
, seismology
Seismology
Seismology is the scientific study of earthquakes and the propagation of elastic waves through the Earth or through other planet-like bodies. The field also includes studies of earthquake effects, such as tsunamis as well as diverse seismic sources such as volcanic, tectonic, oceanic,...
and solar activity.

Both the U.S.
United States
The United States of America is a federal constitutional republic comprising fifty states and a federal district...
and the Soviet Union
Soviet Union
The Soviet Union , officially the Union of Soviet Socialist Republics , was a constitutionally socialist state that existed in Eurasia between 1922 and 1991....
(USSR) launched artificial satellite
Satellite
In the context of spaceflight, a satellite is an object which has been placed into orbit by human endeavour. Such objects are sometimes called artificial satellites to distinguish them from natural satellites such as the Moon....
s for this event; the Soviet Union's Sputnik 1
Sputnik 1
Sputnik 1 ) was the first artificial satellite to be put into Earth's orbit. It was launched into an elliptical low Earth orbit by the Soviet Union on 4 October 1957. The unanticipated announcement of Sputnik 1s success precipitated the Sputnik crisis in the United States and ignited the Space...
in October was the first successful artificial satellite. Other significant achievements of the IGY included the discovery of the Van Allen radiation belts and the discovery of mid-ocean submarine ridges, an important confirmation of plate tectonics
Plate tectonics
Plate tectonics is a scientific theory that describes the large scale motions of Earth's lithosphere...
. Also detected was the rare occurrence of hard solar corpuscular radiation that could be highly dangerous for manned space flight.

In March 1950, at a gathering of eight or ten top scientists (including Lloyd Berkner
Lloyd Berkner
Lloyd Viel Berkner was an American physicist and engineer. He is notable as the first person to measure the height and density of the ionosphere. This permitted the first complete theory of short wave radio propagation.Later he investigated the development of the Earth's atmosphere...
, S. Fred Singer
Fred Singer
Siegfried Fred Singer is an Austrian-born American physicist and emeritus professor of environmental science at the University of Virginia...
, and Harry Vestine) in James Van Allen
James Van Allen
James Alfred Van Allen was an American space scientist at the University of Iowa.The Van Allen radiation belts were named after him, following the 1958 satellite missions in which Van Allen had argued that a Geiger counter should be used to detect charged particles.- Life and career :* September...
's living room, someone suggested that with the development of new tools such as rockets, radar and computers, the time was ripe to have, instead of a Polar Year, a worldwide Geophysical Year. From the March 1950 meeting, Lloyd Berkner and other participants proposed to the International Council of Scientific Unions that an International Geophysical Year (IGY) be planned for 1957—58, during an approaching period of maximum solar activity. In 1955 the U.S. announced the plan to launch an artificial 'moon' (Project Vanguard) a satellite, into orbit around the earth: http://www.nrl.navy.mil/accomplishments/rockets/vanguard-project/

After several failed launches, von Braun (Project Apollo) and his team convinced President Eisenhower to use a military missile - this was after Russia launched it's Sputniks into orbit. See below:

October 4, 1957, the USSR launched the world's first artificial satellite, Sputnik 1
Sputnik 1
Sputnik 1 ) was the first artificial satellite to be put into Earth's orbit. It was launched into an elliptical low Earth orbit by the Soviet Union on 4 October 1957. The unanticipated announcement of Sputnik 1s success precipitated the Sputnik crisis in the United States and ignited the Space...
.

November 8, 1957, U.S. Secretary of Defense Neil McElroy instructed the U.S. Army to use a modified Jupiter-C
Jupiter-C
The Jupiter-C was an American sounding rocket used for three sub-orbital spaceflights in 1956 and 1957 to test re-entry nosecones that were later to be deployed on the more advanced PGM-19 Jupiter mobile missile....
rocket to launch a satellite as part of the IGY. 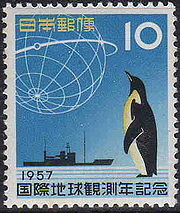 IGY triggered an 18-month year of Antarctic science. The International Council of Scientific Unions, a parent body, broadened the proposals from polar studies to geophysical research. More than 70 existing national scientific organizations then formed IGY committees, and participated in the cooperative effort.

Halley Research Station
Halley Research Station
Halley Research Station, run by the British Antarctic Survey, is located on the Brunt Ice Shelf floating on the Weddell Sea in Antarctica. It is a British research facility dedicated to the study of the Earth's atmosphere...
was founded in 1956, for IGY, by an expedition from the Royal Society
Royal Society
The Royal Society of London for Improving Natural Knowledge, known simply as the Royal Society, is a learned society for science, and is possibly the oldest such society in existence. Founded in November 1660, it was granted a Royal Charter by King Charles II as the "Royal Society of London"...
. The bay where the expedition set up their base was named Halley Bay, after the astronomer Edmond Halley
Edmond Halley
Edmond Halley FRS was an English astronomer, geophysicist, mathematician, meteorologist, and physicist who is best known for computing the orbit of the eponymous Halley's Comet. He was the second Astronomer Royal in Britain, following in the footsteps of John Flamsteed.-Biography and career:Halley...
.

In Japan, The Antarctic exploration was planned in 1955 by Monbushō and Science and technology Agency
Ministry of Education, Culture, Sports, Science and Technology (Japan)
The , also known as MEXT or Monkashō, is one of the ministries of the Japanese government.The Meiji government created the first Ministry of Education in 1871....
. Japan Maritime Safety Agency
Japan Coast Guard
The , formerly the Maritime Safety Agency, is the Japanese coast guard. Comprising about 12,000 personnel, it is under the oversight of the Ministry of Land, Infrastructure, Transport and Tourism, and is responsible for the protection the coast-lines of Japan...
offered ice breaker Sōya
Soya (icebreaker)
The ' is a Japanese museum ship that previously served as an icebreaker and patrol boat, and was the first Japanese ship to take part in an Antarctic research expedition.-Construction:...
as the South Pole observation ship. The first Antarctic observation corps commanded by Takeshi Nagata
Takeshi Nagata
was a Japanese geophysicist. He studied geomagnetism.He won the Gold Medal of the Royal Astronomical Society in 1987....
left Japan in 1956, arriving at Antarctica on January 29, 1957. Showa Station was the first Japanese observation base on Antarctica and was set up on same day.

France contributed with Dumont d'Urville Station
Dumont d'Urville Station
The Dumont d'Urville Station is a French scientific station located in Antarctica on Île des Pétrels, archipelago of Pointe Géologie in Adélie Land. It is named after explorer Jules Dumont d'Urville...
and Charcot Station in Adélie Land
Adélie Land
Adélie Land is the portion of the Antarctic coast between 136° E and 142° E , with a shore length of 350 km and with its hinterland extending as a sector about 2,600 km toward the South Pole. It is claimed by France as one of five districts of the French Southern and Antarctic Lands, although not...
. As a forerunner expedition, the ship Commandant Charcot of the French Navy
French Navy
The French Navy, officially the Marine nationale and often called La Royale is the maritime arm of the French military. It includes a full range of fighting vessels, from patrol boats to a nuclear powered aircraft carrier and 10 nuclear-powered submarines, four of which are capable of launching...
spent nine months of 1949/50 at the coast of Adelie Land. Ionospheric
Ionosphere
The ionosphere is a part of the upper atmosphere, comprising portions of the mesosphere, thermosphere and exosphere, distinguished because it is ionized by solar radiation. It plays an important part in atmospheric electricity and forms the inner edge of the magnetosphere...
soundings were performed aboard this ship. The first French station, Port Martin
Port Martin
Port Martin is an anchorage lying immediately off Cape Margerie. Discovered in 1950 by the French Antarctic Expedition under Liotard, and named by them in conjunction with the expedition base established on Cape Margerie. Named for Andre-Paul Martin, second-in-command of the expedition who died...
, was completed April 9, 1950, but destroyed by fire the night of January 22 to 23, 1952.

The Amundsen–Scott South Pole Station was erected as the first permanent structure at the South Pole in January 1957. It survived intact for 53 years, but was slowly buried in the ice (as all structures there eventually sink into the icy crust), until it was demolished in December 2010 for safety reasons.