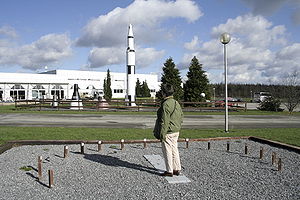 Euro Space Center is an educational tourist attraction located in Transinne
Libin
Libin is a Walloon municipality of Belgium located in the province of Luxembourg.On 1 January 2007 the municipality, which covers 139.72 km², had 4,655 inhabitants, giving a population density of 33.3 inhabitants per km²....
, Belgium
Belgium
Belgium , officially the Kingdom of Belgium, is a federal state in Western Europe. It is a founding member of the European Union and hosts the EU's headquarters, and those of several other major international organisations such as NATO.Belgium is also a member of, or affiliated to, many...
, near Redu
Redu
Redu is a village in the municipality of Libin, in Luxembourg province, Belgium. The village is twinned with Hay-on-Wye in the United Kingdom and it is one of the very first book towns....
, devoted to space and astronautics. The centre includes simulators of space flight and micro-gravity. It is the home of the only full-scale mock-up of the US Space Shuttle
Space Shuttle
The Space Shuttle was a manned orbital rocket and spacecraft system operated by NASA on 135 missions from 1981 to 2011. The system combined rocket launch, orbital spacecraft, and re-entry spaceplane with modular add-ons...
existing in Europe
Europe
Europe is, by convention, one of the world's seven continents. Comprising the westernmost peninsula of Eurasia, Europe is generally 'divided' from Asia to its east by the watershed divides of the Ural and Caucasus Mountains, the Ural River, the Caspian and Black Seas, and the waterways connecting...
.