Encyclopedia
Ski warfare, the use of ski
Skiing
Skiing is a recreational activity using skis as equipment for traveling over snow. Skis are used in conjunction with boots that connect to the ski with use of a binding....
-equipped troops in war
War
War is a state of organized, armed, and often prolonged conflict carried on between states, nations, or other parties typified by extreme aggression, social disruption, and usually high mortality. War should be understood as an actual, intentional and widespread armed conflict between political...
, is first recorded by the Danish
Denmark
Denmark is a Scandinavian country in Northern Europe. The countries of Denmark and Greenland, as well as the Faroe Islands, constitute the Kingdom of Denmark . It is the southernmost of the Nordic countries, southwest of Sweden and south of Norway, and bordered to the south by Germany. Denmark...
historian Saxo Grammaticus
Saxo Grammaticus
Saxo Grammaticus also known as Saxo cognomine Longus was a Danish historian, thought to have been a secular clerk or secretary to Absalon, Archbishop of Lund, foremost advisor to Valdemar I of Denmark. He is the author of the first full history of Denmark.- Life :The Jutland Chronicle gives...
in the 13th century. The speed and distance that ski troops are able to cover is comparable to that of light cavalry
Cavalry
Cavalry or horsemen were soldiers or warriors who fought mounted on horseback. Cavalry were historically the third oldest and the most mobile of the combat arms...
. 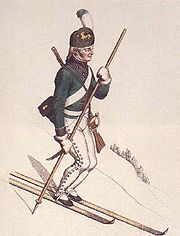 Denmark-Norway (though mostly Norwegian) ski troops were used against Sweden
Sweden
Sweden , officially the Kingdom of Sweden , is a Nordic country on the Scandinavian Peninsula in Northern Europe. Sweden borders with Norway and Finland and is connected to Denmark by a bridge-tunnel across the Öresund....
during the 1807–1814 Napoleonic Wars
Napoleonic Wars
The Napoleonic Wars were a series of wars declared against Napoleon's French Empire by opposing coalitions that ran from 1803 to 1815. As a continuation of the wars sparked by the French Revolution of 1789, they revolutionised European armies and played out on an unprecedented scale, mainly due to...
.

During WWI
World War I
World War I , which was predominantly called the World War or the Great War from its occurrence until 1939, and the First World War or World War I thereafter, was a major war centred in Europe that began on 28 July 1914 and lasted until 11 November 1918...
the Italian Army
Italian Army
The Italian Army is the ground defence force of the Italian Armed Forces. It is all-volunteer force of active-duty personnel, numbering 108,355 in 2010. Its best-known combat vehicles are the Dardo infantry fighting vehicle, the Centauro tank destroyer and the Ariete tank, and among its aircraft...
raised 88 Alpini
Alpini
The Alpini, , are the elite mountain warfare soldiers of the Italian Army. They are currently organized in two operational brigades, which are subordinated to the Alpini Corps Command. The singular is Alpino ....
Battalions. Their purpose was to fight summer and winter in the highest regions of the Alpine Arch. Most of the battalions were dissolved after WWI. Only nine Alpini regiments remain in service today, and only four still train every soldier in ski warfare: the 4th Alpini Parachutist Regiment, 5th Alpini Regiment , 6th Alpini Regiment regiments and 7th Alpini Regiment.

Ski troops played a key role in the successes of the Finnish
Finland
Finland , officially the Republic of Finland, is a Nordic country situated in the Fennoscandian region of Northern Europe. It is bordered by Sweden in the west, Norway in the north and Russia in the east, while Estonia lies to its south across the Gulf of Finland.Around 5.4 million people reside...
war effort against the Soviet Union
Soviet Union
The Soviet Union , officially the Union of Soviet Socialist Republics , was a constitutionally socialist state that existed in Eurasia between 1922 and 1991....
during the Winter War
Winter War
The Winter War was a military conflict between the Soviet Union and Finland. It began with a Soviet offensive on 30 November 1939 – three months after the start of World War II and the Soviet invasion of Poland – and ended on 13 March 1940 with the Moscow Peace Treaty...
in 1939. Forested, rural terrain with no roads was used by Finnish ski troops with great success against the advancing mechanized Soviet troops. Most notably, in Battle of Suomussalmi
Battle of Suomussalmi
The Battle of Suomussalmi [suo.mus.sal.mi] was fought between Finnish and Soviet forces in the Winter War. The action took place from around December 7, 1939 to January 8, 1940.The outcome was a major Finnish victory against vastly superior forces...
, two Soviet mechanized divisions (45,000 men) were annihilated by three Finnish regiments (11,000 men).

Perhaps learning from the Finns, the Soviet Union
Soviet Union
The Soviet Union , officially the Union of Soviet Socialist Republics , was a constitutionally socialist state that existed in Eurasia between 1922 and 1991....
deployed several ski battalion
Battalion
A battalion is a military unit of around 300–1,200 soldiers usually consisting of between two and seven companies and typically commanded by either a Lieutenant Colonel or a Colonel...
s during World War II
World War II
World War II, or the Second World War , was a global conflict lasting from 1939 to 1945, involving most of the world's nations—including all of the great powers—eventually forming two opposing military alliances: the Allies and the Axis...
, notably in their 1941 counter attack in the Battle of Moscow
Battle of Moscow
The Battle of Moscow is the name given by Soviet historians to two periods of strategically significant fighting on a sector of the Eastern Front during World War II. It took place between October 1941 and January 1942. The Soviet defensive effort frustrated Hitler's attack on Moscow, capital of...
.

The most common transportation for Norwegian soldiers during the Norwegian Campaign
Norwegian Campaign
The Norwegian Campaign was a military campaign that was fought in Norway during the Second World War between the Allies and Germany, after the latter's invasion of the country. In April 1940, the United Kingdom and France came to Norway's aid with an expeditionary force...
in 1940 was skis and sled
Sled
A sled, sledge, or sleigh is a land vehicle with a smooth underside or possessing a separate body supported by two or more smooth, relatively narrow, longitudinal runners that travels by sliding across a surface. Most sleds are used on surfaces with low friction, such as snow or ice. In some cases,...
s, and in Operation Gunnerside, paradropped
Paratrooper
Paratroopers are soldiers trained in parachuting and generally operate as part of an airborne force.Paratroopers are used for tactical advantage as they can be inserted into the battlefield from the air, thereby allowing them to be positioned in areas not accessible by land...
Norwegian commando
Commando
In English, the term commando means a specific kind of individual soldier or military unit. In contemporary usage, commando usually means elite light infantry and/or special operations forces units, specializing in amphibious landings, parachuting, rappelling and similar techniques, to conduct and...
s covered a large distance using skis in order to reach and destroy a heavy water
Heavy water
Heavy water is water highly enriched in the hydrogen isotope deuterium; e.g., heavy water used in CANDU reactors is 99.75% enriched by hydrogen atom-fraction...
plant Vemork
Vemork
Vemork is the name of a hydroelectric power plant outside Rjukan in Tinn, Norway. The plant was built by Norsk Hydro and opened in 1911, its main purpose being to fix nitrogen for the production of fertilizer. Vemork was later the site of the first plant in the world to mass-produce heavy water...
at Rjukan
Rjukan
Rjukan is a town and the administrative center of Tinn municipality in Telemark . It is situated in Vestfjorddalen, between Møsvatn and Tinnsjå, and got its name after Rjukanfossen west of the town. The Tinn municipality council granted township status for Rjukan in 1996. The town has 3 386...
in Telemark
Telemark
is a county in Norway, bordering Vestfold, Buskerud, Hordaland, Rogaland and Aust-Agder. The county administration is in Skien. Until 1919 the county was known as Bratsberg amt.-Location:...
, Norway
Norway
Norway , officially the Kingdom of Norway, is a Nordic unitary constitutional monarchy whose territory comprises the western portion of the Scandinavian Peninsula, Jan Mayen, and the Arctic archipelago of Svalbard and Bouvet Island. Norway has a total area of and a population of about 4.9 million...
, which was being used by the Germans as part of their nuclear research programme.

Ski warfare even extended to the Middle East where the Australian Ski Corps were deployed against Vichy French forces in the mountains of Lebanon. Photo.

The Norwegian
Norway
Norway , officially the Kingdom of Norway, is a Nordic unitary constitutional monarchy whose territory comprises the western portion of the Scandinavian Peninsula, Jan Mayen, and the Arctic archipelago of Svalbard and Bouvet Island. Norway has a total area of and a population of about 4.9 million...
military have held skiing competitions since the 1670s. The sport of Biathlon
Biathlon
Biathlon is a term used to describe any sporting event made up of two disciplines. However, biathlon usually refers specifically to the winter sport that combines cross-country skiing and rifle shooting...
was developed from military skiing patrols.

Many nations train troops in skiing and winter warfare, including: