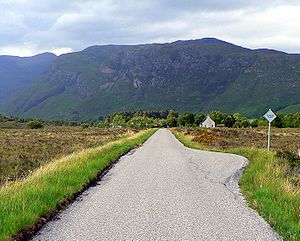 A single-track road or one-lane road is a road
Road
A road is a thoroughfare, route, or way on land between two places, which typically has been paved or otherwise improved to allow travel by some conveyance, including a horse, cart, or motor vehicle. Roads consist of one, or sometimes two, roadways each with one or more lanes and also any...
that permits two-way travel but is not wide enough in most places to allow vehicle
Vehicle
A vehicle is a device that is designed or used to transport people or cargo. Most often vehicles are manufactured, such as bicycles, cars, motorcycles, trains, ships, boats, and aircraft....
s to pass
Overtaking
Overtaking or passing is the act of one vehicle going past another slower moving vehicle, travelling in the same direction, on a road. The lane used for overtaking another vehicle is almost always a lane further from the road shoulder — that is, to the left in places that drive on the right,...
one another (although for some it is possible for two compact car
Compact car
A compact car , or small family car , is a classification of cars which are larger than a supermini but smaller than or equal to a mid-size car...
s to pass). This kind of road is common in rural
Rural
Rural areas or the country or countryside are areas that are not urbanized, though when large areas are described, country towns and smaller cities will be included. They have a low population density, and typically much of the land is devoted to agriculture...
areas across the United Kingdom
United Kingdom
The United Kingdom of Great Britain and Northern IrelandIn the United Kingdom and Dependencies, other languages have been officially recognised as legitimate autochthonous languages under the European Charter for Regional or Minority Languages...
and elsewhere. To accommodate two-way traffic
Traffic
Traffic on roads may consist of pedestrians, ridden or herded animals, vehicles, streetcars and other conveyances, either singly or together, while using the public way for purposes of travel...
, many single-track roads, especially those officially designated as such, are provided with passing places (United Kingdom) or pullouts or turnouts (United States), or simply wide spots in the road, which may be scarcely longer than a typical automobile
Automobile
An automobile, autocar, motor car or car is a wheeled motor vehicle used for transporting passengers, which also carries its own engine or motor...
using the road. The distance between points where passing is possible varies considerably, depending on the terrain
Terrain
Terrain, or land relief, is the vertical and horizontal dimension of land surface. When relief is described underwater, the term bathymetry is used...
and the volume of traffic on the road. The railway analog for passing places are passing loop
Passing loop
A passing loop is a place on a single line railway or tramway, often located at a station, where trains or trams in opposing directions can pass each other. Trains/trams in the same direction can also overtake, providing that the signalling arrangement allows it...
s.

The term is widely used in Scotland
Scotland
Scotland is a country that is part of the United Kingdom. Occupying the northern third of the island of Great Britain, it shares a border with England to the south and is bounded by the North Sea to the east, the Atlantic Ocean to the north and west, and the North Channel and Irish Sea to the...
, particularly the Highlands
Scottish Highlands
The Highlands is an historic region of Scotland. The area is sometimes referred to as the "Scottish Highlands". It was culturally distinguishable from the Lowlands from the later Middle Ages into the modern period, when Lowland Scots replaced Scottish Gaelic throughout most of the Lowlands...
, to describe such roads. Passing places are generally marked with a diamond-shaped white sign with the words "passing place" on it. New signs tend to be square rather than diamond-shaped, as diamond signs are also used for instructions to tram
Tram
A tram is a passenger rail vehicle which runs on tracks along public urban streets and also sometimes on separate rights of way. It may also run between cities and/or towns , and/or partially grade separated even in the cities...
drivers in cities. On some roads, especially in Argyll and Bute
Argyll and Bute
Argyll and Bute is both one of 32 unitary council areas; and a Lieutenancy area in Scotland. The administrative centre for the council area is located in Lochgilphead.Argyll and Bute covers the second largest administrative area of any Scottish council...
, passing places may be marked with black-and-white-striped posts. Signs remind drivers of slower vehicles to pull over into a passing place (or opposite it, if it is on the opposite side of the road) to let following vehicles pass, and most drivers oblige. The same system is found very occasionally in rural England
England
England is a country that is part of the United Kingdom. It shares land borders with Scotland to the north and Wales to the west; the Irish Sea is to the north west, the Celtic Sea to the south west, with the North Sea to the east and the English Channel to the south separating it from continental...
and Wales
Wales
Wales is a country that is part of the United Kingdom and the island of Great Britain, bordered by England to its east and the Atlantic Ocean and Irish Sea to its west. It has a population of three million, and a total area of 20,779 km²...
. Also it is often possible for two small vehicles to pass one another at a place other than a designated passing place.

Some A-class and B-class roads in the Highlands are still single-track, although many sections have been widened for the sake of faster travel. Recently the A830 "Road to the Isles" and A851 on Skye
Skye
Skye or the Isle of Skye is the largest and most northerly island in the Inner Hebrides of Scotland. The island's peninsulas radiate out from a mountainous centre dominated by the Cuillin hills...
have had all their single-track sections replaced with higher-quality single-carriageway road.

In remote backcountry
Backcountry
A backcountry area in general terms is a geographical region that is:* isolated* remote* undeveloped* difficult to accessThe term may apply to various regions that are reasonably close to urban areas but are:* not immediately accessible by car...
areas around the world, particularly in mountains, many roads are single-track and unmarked. These include many U.S. Forest Service and logging roads in the United States
United States
The United States of America is a federal constitutional republic comprising fifty states and a federal district...
. In Peru
Peru
Peru , officially the Republic of Peru , is a country in western South America. It is bordered on the north by Ecuador and Colombia, on the east by Brazil, on the southeast by Bolivia, on the south by Chile, and on the west by the Pacific Ocean....
, the second of two overland transportation routes between Cuzco and Madre de Dios Region
Madre de Dios Region
Madre de Dios is a region in southeastern Peru, bordering Brazil, Bolivia and the Peruvian regions of Puno, Cusco and Ucayali. Its capital is the city of Puerto Maldonado. The name of the region is a very common Spanish language designation for the Virgin Mary, literally meaning Mother of...
, a 300 km heavy-truck route, is a single-track road of gravel and dirt.

Chicane
Chicane
A chicane is an artificial feature creating extra turns in a road, used in motor racing and on city streets to slow cars to lower speeds.- Motor Racing :...
s are often placed on residential streets as a more aesthetic means to slow-down cars
Traffic calming
Traffic calming is intended to slow or reduce motor-vehicle traffic in order to improve the living conditions for residents as well as to improve safety for pedestrians and cyclists. Urban planners and traffic engineers have many strategies for traffic calming...
.

Sometimes, for budget reasons, and where traffic is fairly low, bridge
Bridge
A bridge is a structure built to span physical obstacles such as a body of water, valley, or road, for the purpose of providing passage over the obstacle...
s exist as single-track corridors. Tunnels in remote areas can also be one lane when the tunnel is short and traffic is low, when building a hill or blasting away the mountain is too cost prohibitive.

The most common example of private single-track roads are long driveway
Driveway
A driveway is a type of private road for local access to one or a small group of structures, and is owned and maintained by an individual or group....
s of rural properties such as country houses and farm
Farm
A farm is an area of land, or, for aquaculture, lake, river or sea, including various structures, devoted primarily to the practice of producing and managing food , fibres and, increasingly, fuel. It is the basic production facility in food production. Farms may be owned and operated by a single...
property.

The mountain passes on the Dalton Highway
Dalton Highway
The James W. Dalton Highway, usually Dalton Highway is a 414-mile road in Alaska. It begins at the Elliott Highway, north of Fairbanks, and ends at Deadhorse near the Arctic Ocean and the Prudhoe Bay oil fields...
in Alaska
Alaska
Alaska is the largest state in the United States by area. It is situated in the northwest extremity of the North American continent, with Canada to the east, the Arctic Ocean to the north, and the Pacific Ocean to the west and south, with Russia further west across the Bering Strait...
have a rule where goods-carrying northbound truck
Truck
A truck or lorry is a motor vehicle designed to transport cargo. Trucks vary greatly in size, power, and configuration, with the smallest being mechanically similar to an automobile...
traffic has the right of way, while returning southbound traffic has to stop, as mentioned on Ice Road Truckers
Ice Road Truckers
Ice Road Truckers is a documentary-style reality television series that premiered on History on June 17, 2007.-History:In 2000, History aired a 46-minute episode titled "Ice Road Truckers" as part of the Suicide Missions series...
. The reason behind this procedure is that traffic going north is in somewhat of a hurry to deliver equipment to Deadhorse, Prudhoe Bay, and the drill site over the frozen Arctic Ocean
Arctic Ocean
The Arctic Ocean, located in the Northern Hemisphere and mostly in the Arctic north polar region, is the smallest and shallowest of the world's five major oceanic divisions...
.

When reconstruction is being done on 2-lane highways where traffic is moderately heavy, a worker will often stand at each end of the construction zone
Roadworks
Roadworks occur when part of the road, or in rare cases, the entire road, has to be occupied for work relating to the road, most often in the case of road surface repairs...
, holding a sign with "SLOW" or "GO" written on one side and "STOP" on the reverse. The workers, who communicate through yelling, hand gestures, or radio, will periodically reverse their signs to allow time for traffic to flow in each direction.

If lines of sight
Sightline
A sightline, or sight line, is a normally unobstructed line-of-sight between an intended observer and a stage, arena, or monument, for example. Sightlines are a particularly important consideration in theatre and stadium design, road junction layout and urban planning...
are long, and both drivers are familiar with the road, vehicles heading towards each other can adjust their speed so as to arrive at a wide spot at the same time and pass slowly, avoiding the need for either vehicle to stop.

When two vehicles meet head-on, generally the drivers confer to decide in which direction lies the closest wide spot, and together they travel there, the lead vehicle necessarily in reverse gear.

Usually when there is a brief one-lane bottleneck of a 2-lane road, traffic will usually yield to oncoming traffic already in the bottleneck. One-lane single-track roads usually have no conflict.