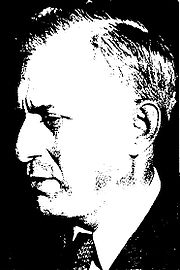 Simon Pullman was a violin
Violin
The violin is a string instrument, usually with four strings tuned in perfect fifths. It is the smallest, highest-pitched member of the violin family of string instruments, which includes the viola and cello....
ist, conductor
Conducting
Conducting is the art of directing a musical performance by way of visible gestures. The primary duties of the conductor are to unify performers, set the tempo, execute clear preparations and beats, and to listen critically and shape the sound of the ensemble...
, music teacher and founder and Director of the Pullman Ensemble and Orchestra, and a seminal figure in the evolution of chamber music
Chamber music
Chamber music is a form of classical music, written for a small group of instruments which traditionally could be accommodated in a palace chamber. Most broadly, it includes any art music that is performed by a small number of performers with one performer to a part...
performance.

Born in Warsaw
Warsaw
Warsaw is the capital and largest city of Poland. It is located on the Vistula River, roughly from the Baltic Sea and from the Carpathian Mountains. Its population in 2010 was estimated at 1,716,855 residents with a greater metropolitan area of 2,631,902 residents, making Warsaw the 10th most...
, he was a nephew of the famous Yiddish actress
Acting
Acting is the work of an actor or actress, which is a person in theatre, television, film, or any other storytelling medium who tells the story by portraying a character and, usually, speaking or singing the written text or play....
Esther Rachel Kaminska and cousin of Ida Kaminska
Ida Kaminska
Ida Kaminska was a Polish actress.-Early life:Born in Odessa, Russia she was the daughter of Yiddish stage actress Esther Rachel Kamińska and actor, director and stage producer, Avram Izhak Kamiński . She reportedly married and divorced actor Marian Melman...
and Josef Kaminsky. He studied with Leopold von Auer at the St. Petersburg Conservatory
Saint Petersburg Conservatory
The N. A. Rimsky-Korsakov Saint Petersburg State Conservatory is a music school in Saint Petersburg. In 2004, the conservatory had around 275 faculty members and 1,400 students.-History:...
(1905-1909) where he received his diploma. 1913 he continued his studies with Martin Pierre Marsick
Martin Pierre Marsick
Martin Pierre Joseph Marsick , was a Belgian violin player and teacher.In 1854, seven-year old Marsick was admitted to the Royal Conservatory of Music in Liège, to study violin with Désiré Heynberg...
at the Conservatoire de Paris
Conservatoire de Paris
The Conservatoire de Paris is a college of music and dance founded in 1795, now situated in the avenue Jean Jaurès in the 19th arrondissement of Paris, France...
. Back in Warsaw, he founded and led a chamber orchestra specialised on music of the Vienna Classic (1915 to 1920). In the 1920’s and 30’s he taught violin
Violin
The violin is a string instrument, usually with four strings tuned in perfect fifths. It is the smallest, highest-pitched member of the violin family of string instruments, which includes the viola and cello....
, viola
Viola
The viola is a bowed string instrument. It is the middle voice of the violin family, between the violin and the cello.- Form :The viola is similar in material and construction to the violin. A full-size viola's body is between and longer than the body of a full-size violin , with an average...
, and chamber music at the New Vienna Conservatory
Neues Wiener Konservatorium
The Neues Wiener Konservatorium was a music school established in Vienna by Theobald Kretschmann in 1909. In 1929 it had the largest number of enrolled students during its lifetime....
(Neues Wiener Konservatorium), where he coached several groups including the Galimir String Quartet (led by Felix Galimir
Felix Galimir
Felix Galimir was an Austrian-born American-Jewish violinist and music teacher.He studied with Adolf Bak and Simon Pullman at the Vienna Conservatory from the age of twelve and graduated in 1928. With his three sisters he founded the Galimir Quartet in 1927 to commemorate the 100-year anniversary...
). In 1930 he founded the Pullman Ensemble, consisting of 17 string players (4 string quartets with a double-bass), of which the specialty was their performance of Beethoven
Ludwig van Beethoven
Ludwig van Beethoven was a German composer and pianist. A crucial figure in the transition between the Classical and Romantic eras in Western art music, he remains one of the most famous and influential composers of all time.Born in Bonn, then the capital of the Electorate of Cologne and part of...
’s Große Fuge
Große Fuge
The Große Fuge , Op. 133, is a single-movement composition for string quartet by Ludwig van Beethoven. A massive double fugue, it originally served as the final movement of his Quartet No. 13 in B major but he replaced it with a new finale and published it separately in 1827 as Op...
Op. 133 and String Quartet in C# minor Op. 131
String Quartet No. 14 (Beethoven)
The String Quartet No. 14 in C minor, Op. 131, by Ludwig van Beethoven was completed in 1826. About 40 minutes in length, it consists of seven movements to be played without a break, as follows:#Adagio ma non troppo e molto...
. Later, 10 windplayers were added to form the Pullman Orchestra, which performed regularly in Vienna
Vienna
Vienna is the capital and largest city of the Republic of Austria and one of the nine states of Austria. Vienna is Austria's primary city, with a population of about 1.723 million , and is by far the largest city in Austria, as well as its cultural, economic, and political centre...
and throughout Europe until 1938, when Pullman was able to escape to Paris
Paris
Paris is the capital and largest city in France, situated on the river Seine, in northern France, at the heart of the Île-de-France region...
.

According to his students and colleagues, Pullman was a visionary musician; his desire for a kind of revelatory ensemble playing led him to make use of the widest possible range of string tone, to demand a perfect legato
Legato
In musical notation the Italian word legato indicates that musical notes are played or sung smoothly and connected. That is, in transitioning from note to note, there should be no intervening silence...
, and to search out highly unorthodox fingerings to match his conceptions of phrasing. Rehearsals were intense and long — however, they functioned as rolling all-day affairs where members came and went as their schedules permitted. Through his pupils Felix Galimir
Felix Galimir
Felix Galimir was an Austrian-born American-Jewish violinist and music teacher.He studied with Adolf Bak and Simon Pullman at the Vienna Conservatory from the age of twelve and graduated in 1928. With his three sisters he founded the Galimir Quartet in 1927 to commemorate the 100-year anniversary...
, Richard Goldner
Richard Goldner
Richard Goldner was a Romanian-born, Viennese-trained Australian violist, pedagogue and inventor. He founded Musica Viva Australia in 1945, which became the world's largest entrepreneurial chamber music organisation. The Goldner String Quartet was named in his memory.-Biography:Richard Goldner...
, and others, his ideas influenced the training of generations of chamber music performers in the U. S.
United States
The United States of America is a federal constitutional republic comprising fifty states and a federal district...
, Australia
Australia
Australia , officially the Commonwealth of Australia, is a country in the Southern Hemisphere comprising the mainland of the Australian continent, the island of Tasmania, and numerous smaller islands in the Indian and Pacific Oceans. It is the world's sixth-largest country by total area...
(Musica Viva Australia
Musica Viva Australia
Musica Viva Australia is the oldest independent performing arts organisation in Australia and the world's largest entrepreneur of chamber music. It was formed in 1945 in Sydney by violist Richard Goldner...
), and elsewhere.

In August 1939, he visited Warsaw
Warsaw
Warsaw is the capital and largest city of Poland. It is located on the Vistula River, roughly from the Baltic Sea and from the Carpathian Mountains. Its population in 2010 was estimated at 1,716,855 residents with a greater metropolitan area of 2,631,902 residents, making Warsaw the 10th most...
, Poland
Poland
Poland , officially the Republic of Poland , is a country in Central Europe bordered by Germany to the west; the Czech Republic and Slovakia to the south; Ukraine, Belarus and Lithuania to the east; and the Baltic Sea and Kaliningrad Oblast, a Russian exclave, to the north...
, in an attempt to sell a house belonging to his wife, and was trapped there by the German invasion
Invasion of Poland (1939)
The Invasion of Poland, also known as the September Campaign or 1939 Defensive War in Poland and the Poland Campaign in Germany, was an invasion of Poland by Germany, the Soviet Union, and a small Slovak contingent that marked the start of World War II in Europe...
. Imprisoned in the Warsaw Ghetto
Warsaw Ghetto
The Warsaw Ghetto was the largest of all Jewish Ghettos in Nazi-occupied Europe during World War II. It was established in the Polish capital between October and November 15, 1940, in the territory of General Government of the German-occupied Poland, with over 400,000 Jews from the vicinity...
, he directed (beneath the orchestra founders Marian Neuteich and Adam Furmanski) the Warsaw Ghetto Symphony Orchestra, which included among notable musicians, Ludwik Holcman
Ludwik Holcman
Ludwik Holcman was a Jewish-Polish violinist.Holcman was a violinist in the Warsaw Ghetto Symphony Orchestra that was led by Simon Pullman. He was transported to Treblinka extermination camp with all the members of the orchestra early in August 1942, where they were killed, presumably shortly...
. The band performed frequently from 1940-1942. Pullman was transported to Treblinka extermination camp
Treblinka extermination camp
Treblinka was a Nazi extermination camp in occupied Poland during World War II near the village of Treblinka in the modern-day Masovian Voivodeship of Poland. The camp, which was constructed as part of Operation Reinhard, operated between and ,. During this time, approximately 850,000 men, women...
in early August 1942, and like him all of the members of the orchestra were presumed to have been killed..