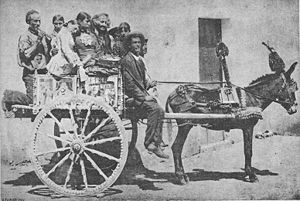 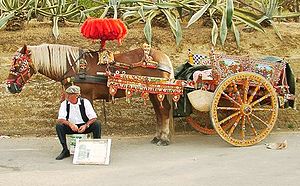 The Sicilian cart is an ornate, colorful style of horse
Horse
The horse is one of two extant subspecies of Equus ferus, or the wild horse. It is a single-hooved mammal belonging to the taxonomic family Equidae. The horse has evolved over the past 45 to 55 million years from a small multi-toed creature into the large, single-toed animal of today...
or donkey
Donkey
The donkey or ass, Equus africanus asinus, is a domesticated member of the Equidae or horse family. The wild ancestor of the donkey is the African Wild Ass, E...
-drawn cart
Cart
A cart is a vehicle designed for transport, using two wheels and normally pulled by one or a pair of draught animals. A handcart is pulled or pushed by one or more people...
native to the island of Sicily
Sicily
Sicily is a region of Italy, and is the largest island in the Mediterranean Sea. Along with the surrounding minor islands, it constitutes an autonomous region of Italy, the Regione Autonoma Siciliana Sicily has a rich and unique culture, especially with regard to the arts, music, literature,...
, in Italy
Italy
Italy , officially the Italian Republic languages]] under the European Charter for Regional or Minority Languages. In each of these, Italy's official name is as follows:;;;;;;;;), is a unitary parliamentary republic in South-Central Europe. To the north it borders France, Switzerland, Austria and...
.

The carts were introduced to the island by the ancient Greek
Ancient Greece
Ancient Greece is a civilization belonging to a period of Greek history that lasted from the Archaic period of the 8th to 6th centuries BC to the end of antiquity. Immediately following this period was the beginning of the Early Middle Ages and the Byzantine era. Included in Ancient Greece is the...
s. Carts reached the height of their popularity in the 1920s, when many thousand were on the island. Miniature carts, or Carrettino Siciliano, are often sold in Sicily (or in Italian shops and restaurants in other countries) as souvenirs. The Museo del Carretto Siciliano, in Terrasini
Terrasini
Terrasini is a town and comune in the Province of Palermo on the island of Sicily in Italy.-Data:Terrasini is located west of Palermo at the motorway between Palermo and Trapani, between the mountains and the Gulf of Castellammare near the Palermo International Airport.Terrasini's population works...
, in the province of Palermo
Province of Palermo
The Province of Palermo is a province in the autonomous region of Sicily, a major island in Southern Italy. Its capital is the city of Palermo. The Province of Palermo has 82 comuni , 1,239,272 inhabitants, and is 4,992 km² .-External links:...
, is a museum dedicated to the carts.

Sicilian wood carver, George Petralia states, that horses were mostly used in the city and flat plains, while donkeys or mules were more often used in rough terrain for hauling heavy loads. The cart has two wheels and is primarily handmade out of wood with iron metal components. Carts are used for hauling miscellaneous light loads, such as produce, wood, wine, and people, called "Carretto del Lavoro" (cart for work) and also carts for festive occasions such as wedding
Wedding
A wedding is the ceremony in which two people are united in marriage or a similar institution. Wedding traditions and customs vary greatly between cultures, ethnic groups, religions, countries, and social classes...
s and parade
Parade
A parade is a procession of people, usually organized along a street, often in costume, and often accompanied by marching bands, floats or sometimes large balloons. Parades are held for a wide range of reasons, but are usually celebrations of some kind...
s called "Carretto de Gara'. The Carretto is like the 'taxi
Taxicab
A taxicab, also taxi or cab, is a type of vehicle for hire with a driver, used by a single passenger or small group of passengers, often for a non-shared ride. A taxicab conveys passengers between locations of their choice...
' or 'truck' of today. 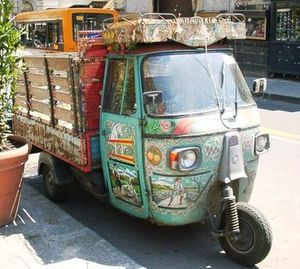 In modern-day Sicily, the tradition continues in small, three-wheeled motorized vehicles (called lapa). They are often painted in the traditional way.

The crews that built carretti included woodcarvers, metal workers, and painters. The woodcarvers carved the many panels that were often historic reliefs. The metal workers worked the iron, in a 'ferro battuto' style, which included highly decorated metal undercarriages.

The Sicilian Carretto is made in several provinces in Sicily each with their own style. Carretti made in the province of Palermo
Palermo
Palermo is a city in Southern Italy, the capital of both the autonomous region of Sicily and the Province of Palermo. The city is noted for its history, culture, architecture and gastronomy, playing an important role throughout much of its existence; it is over 2,700 years old...
have more of a square box design, those made in Catania
Catania
Catania is an Italian city on the east coast of Sicily facing the Ionian Sea, between Messina and Syracuse. It is the capital of the homonymous province, and with 298,957 inhabitants it is the second-largest city in Sicily and the tenth in Italy.Catania is known to have a seismic history and...
are made with more elaborate 'keys', and then there are the carts made in Agrigento
Agrigento
Agrigento , is a city on the southern coast of Sicily, Italy, and capital of the province of Agrigento. It is renowned as the site of the ancient Greek city of Akragas , one of the leading cities of Magna Graecia during the golden...
which have their own distinctive style. 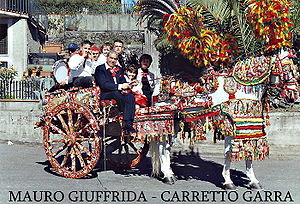 The craft of making the carts is handed down from generation to generation, through the training of apprentices. Carts are known for being covered in carvings and brightly painted scenes from Sicilian history and folklore as well as intricate geometrical designs. These scenes also served the purpose of conveying historical information to those who were illiterate. The colors of Palermo's flag, yellow and red, feature prominently on the carts, along with details in bright blues and greens. The animals pulling the carts are often elaborately adorned as well.