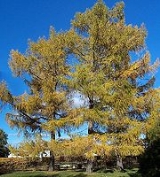 Encyclopedia
The Siberian Larch or Russian Larch (Larix sibirica) is a frost-hardy tree native to western Russia
Russia
Russia or , officially known as both Russia and the Russian Federation , is a country in northern Eurasia. It is a federal semi-presidential republic, comprising 83 federal subjects...
, from close to the Finnish
Finland
Finland , officially the Republic of Finland, is a Nordic country situated in the Fennoscandian region of Northern Europe. It is bordered by Sweden in the west, Norway in the north and Russia in the east, while Estonia lies to its south across the Gulf of Finland.Around 5.4 million people reside...
border east to the Yenisei valley in central Siberia
Siberia
Siberia is an extensive region constituting almost all of Northern Asia. Comprising the central and eastern portion of the Russian Federation, it was part of the Soviet Union from its beginning, as its predecessor states, the Tsardom of Russia and the Russian Empire, conquered it during the 16th...
, where it hybridises with the Dahurian Larch
Dahurian Larch
Dahurian Larch, Larix gmelinii, is a species of larch native to eastern Siberia, and adjacent northeastern Mongolia, northeastern China and North Korea.-Description:...
L. gmelinii of eastern Siberia; the hybrid is known as Larix × czekanowskii
Larix × czekanowskii
Larix × czekanowskii is a larch hybrid, between Siberian Larch Larix sibirica and Dahurian Larch Larix gmelinii.-Description:Larix × czekanowskii occurs where their ranges meet in central Siberia. It is intermediate between its parent species in all characters....
.

It is a medium-size to large deciduous
Deciduous
Deciduous means "falling off at maturity" or "tending to fall off", and is typically used in reference to trees or shrubs that lose their leaves seasonally, and to the shedding of other plant structures such as petals after flowering or fruit when ripe...
coniferous
Pinophyta
The conifers, division Pinophyta, also known as division Coniferophyta or Coniferae, are one of 13 or 14 division level taxa within the Kingdom Plantae. Pinophytes are gymnosperms. They are cone-bearing seed plants with vascular tissue; all extant conifers are woody plants, the great majority being...
tree
Tree
A tree is a perennial woody plant. It is most often defined as a woody plant that has many secondary branches supported clear of the ground on a single main stem or trunk with clear apical dominance. A minimum height specification at maturity is cited by some authors, varying from 3 m to...
reaching 20-50 m tall, with a trunk up to 1 m diameter. The crown is conic when young, becoming broad with age; the main branches are level to upswept, with the side branches often pendulous. The shoots are dimorphic, with growth divided into long shoots (typically 10-50 cm long) and bearing several bud
Bud
In botany, a bud is an undeveloped or embryonic shoot and normally occurs in the axil of a leaf or at the tip of the stem. Once formed, a bud may remain for some time in a dormant condition, or it may form a shoot immediately. Buds may be specialized to develop flowers or short shoots, or may have...
s, and short shoots only 1-2 mm long with only a single bud. It is most easily distinguished from the closely related European Larch
European Larch
Larix decidua, common name European larch, is a species of larch native to the mountains of central Europe, in the Alps and Carpathians, with disjunct lowland populations in northern Poland and southern Lithuania.-Description:...
by the shoots being downy (hairless in European Larch). The leaves
Leaf
A leaf is an organ of a vascular plant, as defined in botanical terms, and in particular in plant morphology. Foliage is a mass noun that refers to leaves as a feature of plants....
are needle-like, light green, 2-5 cm long, and turn bright yellow before they fall in the autumn, leaving the pale yellow-buff shoots bare until the next spring.

The male and female cones
Conifer cone
A cone is an organ on plants in the division Pinophyta that contains the reproductive structures. The familiar woody cone is the female cone, which produces seeds. The male cones, which produce pollen, are usually herbaceous and much less conspicuous even at full maturity...
are borne separately on the same tree; pollination is in early spring. The male cones are solitary, yellow, globose to oblong, 4-8 mm diameter, and produce wingless pollen. The mature female cones are erect, ovoid-conic, 2-5 cm long, with 30-70 erect or slightly incurved (not reflexed) and downy seed scales; they are green variably flushed red when immature, turning brown and opening to release the winged seed
Seed
A seed is a small embryonic plant enclosed in a covering called the seed coat, usually with some stored food. It is the product of the ripened ovule of gymnosperm and angiosperm plants which occurs after fertilization and some growth within the mother plant...
s when mature, 4–6 months after pollination. The old cones commonly remain on the tree for many years, turning dull grey-black. The minimum seed-bearing age is 10–15 years.

Because of its rot resistance, larch wood is especially valuable for posts, poles, railroad tie sleepers
Railroad tie
A railroad tie/railway tie , or railway sleeper is a rectangular item used to support the rails in railroad tracks...
, and mine props.

It is also used in many velodrome
Velodrome
A velodrome is an arena for track cycling. Modern velodromes feature steeply banked oval tracks, consisting of two 180-degree circular bends connected by two straights...
s around the world as the track surface including the Manchester Velodrome
Manchester Velodrome
Manchester Velodrome is an indoor cycle-racing track or velodrome in Manchester, northwest England. It opened in September 1994 and is the leading indoor Olympic-standard track in the United Kingdom. It houses the National Cycling Centre and British Cycling...
and the Velodrome Krylatskoye in Moscow
Moscow
Moscow is the capital, the most populous city, and the most populous federal subject of Russia. The city is a major political, economic, cultural, scientific, religious, financial, educational, and transportation centre of Russia and the continent...
.

It is grown in Canada
Canada
Canada is a North American country consisting of ten provinces and three territories. Located in the northern part of the continent, it extends from the Atlantic Ocean in the east to the Pacific Ocean in the west, and northward into the Arctic Ocean...
and the northern United States
United States
The United States of America is a federal constitutional republic comprising fifty states and a federal district...
to a limited extent, first cultivated there in 1806.

It is faster-growing than many other coniferous trees in cold regions, but requires full sunlight. When grown in plantation
Plantation
A plantation is a long artificially established forest, farm or estate, where crops are grown for sale, often in distant markets rather than for local on-site consumption...
s it should be kept widely spaced, and intensive thinning is required.

See also List of Lepidoptera that feed on larches


L. sibirica cone scales are used as food by the caterpillar
Caterpillar
Caterpillars are the larval form of members of the order Lepidoptera . They are mostly herbivorous in food habit, although some species are insectivorous. Caterpillars are voracious feeders and many of them are considered to be pests in agriculture...
s of the tortrix moth Cydia illutana
Cydia illutana
Cydia illutana is a small moth of the family Tortricidae. It is found from Western and Central Europe , north to Scandinavia and east to Russia ....
.