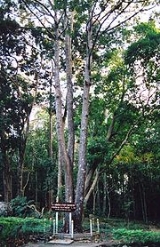 The majority of Shorea are general flowering species. General flowering is an event that occurs at irregular intervals of 3–10 yr, in which nearly all dipterocarp species together with species of other families bloom heavily. It is thought that general flowering evolved to satiate seed predators and/or to facilitate pollination. It appears that both explanations hold merit. Flowering is thought to be triggered by droughts that occur during transition periods from La Niña
La Niña
La Niña is a coupled ocean-atmosphere phenomenon that is the counterpart of El Niño as part of the broader El Niño-Southern Oscillation climate pattern. During a period of La Niña, the sea surface temperature across the equatorial Eastern Central Pacific Ocean will be lower than normal by 3–5 °C...
to El Niño. It is suggested that the magnitude of a flowering event is dependent on the timing of the droughts associated with the El Niño southern oscillation (ENSO) cycle, with the largest events occurring after an interval of several years with no flowering.

Shorea are insect pollinated and a variety of insects have been implicated, with species within the sections of Shorea sharing the same insect pollinators. Flowering within a section is sequential within one habitat and species association to prevent competition for pollinators.

Many economically important timber
Timber
Timber may refer to:* Timber, a term common in the United Kingdom and Australia for wood materials * Timber, Oregon, an unincorporated community in the U.S...
trees belong to Shorea. They are sold under various trade names including "Meranti", "Lauan" (or "Luan"), "Lawaan", "Seraya", "Balau", and "Bangkirai". (For a list of species associated with each name, see the article on Dipterocarp timber classification
Dipterocarp timber classification
The following table associates tree species, wood name and wood colour....
). Other products from Shorea spp. include Dammar and Illepe. Dammar is a resin collected from a variety of species. It varies in colour among the different taxonomic groups. Shorea wiesneri is listed in many websites as an important source of dammar; however, this appears to be either a trade name or a synonym.

The alluringly-named "Philippine Mahogany
Philippine mahogany
Philippine mahogany is a common name for several different species of trees and their wood.*Botanically, the name refers to the species Toona calantas in the mahogany family Meliaceae....
" sold in North America is not a mahogany
Mahogany
The name mahogany is used when referring to numerous varieties of dark-colored hardwood. It is a native American word originally used for the wood of the species Swietenia mahagoni, known as West Indian or Cuban mahogany....
at all, but actually a mixture of woods from the genus Shorea. More properly, the name 'Philippine Mahogany' is applied to Toona calantas
Toona calantas
Toona calantas is a species of plant in the Meliaceae family. It is found in Indonesia, the Philippines, and Thailand. It is threatened by habitat loss.-Source:...
and not to wood from the genus Shorea.

One hundred and forty eight species of Shorea are currently listed on the IUCN Redlist. The majority of which are listed as being critically endangered. There are some concerns regarding the IUCN's listing of Dipterocarps, as the criteria used to assess the level of threat are based mainly on animal population characteristics. This is thought to overstate the threat assessment, when applied to long-lived habitat-specific organisms such as trees. Furthermore one species reportedly extinct, on the IUCN Red list, Shorea cuspidata is reported to be common in the Bako National Park
Bako National Park
Bako National Park, established in 1957, is the oldest national park in Sarawak, eastern Malaysia, on the island of Borneo. It covers an area of at the tip of the Muara Tebas peninsula at the mouth of the Bako and Kuching Rivers. It is approximately by road from Kuching...
and also present in the Lambir National Park. The Shorea species page gives threat classifications.
The source of this article is wikipedia, the free encyclopedia.  The text of this article is licensed under the GFDL.