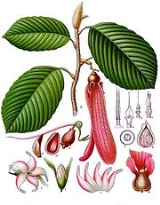 Encyclopedia
Dipterocarpaceae is a family
Family (biology)
In biological classification, family is* a taxonomic rank. Other well-known ranks are life, domain, kingdom, phylum, class, order, genus, and species, with family fitting between order and genus. As for the other well-known ranks, there is the option of an immediately lower rank, indicated by the...
of 17 genera and approximately 500 species of mainly tropical lowland rainforest
Rainforest
Rainforests are forests characterized by high rainfall, with definitions based on a minimum normal annual rainfall of 1750-2000 mm...
tree
Tree
A tree is a perennial woody plant. It is most often defined as a woody plant that has many secondary branches supported clear of the ground on a single main stem or trunk with clear apical dominance. A minimum height specification at maturity is cited by some authors, varying from 3 m to...
s. The family name, from the type genus Dipterocarpus
Dipterocarpus
Dipterocarpus is a genus of flowering plants and the type genus of family Dipterocarpaceae. The genus has about 70 species, occurring in Southeast Asia. It is an important component of dipterocarp forests...
, is derived from Greek
Greek language
Greek is an independent branch of the Indo-European family of languages. Native to the southern Balkans, it has the longest documented history of any Indo-European language, spanning 34 centuries of written records. Its writing system has been the Greek alphabet for the majority of its history;...
(di = two, pteron = wing and karpos = fruit) and refers to the two-winged fruit. The largest genera are Shorea (196 species), Hopea (104 species), Dipterocarpus (70 species), and Vatica (65 species). Many are large forest
Forest
A forest, also referred to as a wood or the woods, is an area with a high density of trees. As with cities, depending where you are in the world, what is considered a forest may vary significantly in size and have various classification according to how and what of the forest is composed...
emergent species, typically reaching heights of 40–70 m tall, some even over 80 m (in the genera
Genera
Genera is a commercial operating system and development environment for Lisp machines developed by Symbolics. It is essentially a fork of an earlier operating system originating on the MIT AI Lab's Lisp machines which Symbolics had used in common with LMI and Texas Instruments...
Dryobalanops
Dryobalanops
Dryobalanops is a genus of flowering plants and the genus of family Dipterocarpaceae. The name Dryobalanops is derived from Greek and describes the acorn-like nut. The genus has seven species, confined to the tropical forests of West Malesia...
, Hopea
Hopea
Hopea is a genus of plant in family Dipterocarpaceae. The genus was named after John Hope, 1725-1786, the first Regius Keeper of the Royal Botanic Garden, Edinburgh. It contains about 104 species, distributed from Sri Lanka and southern India to southern China, and southward throughout Malesia to...
and Shorea
Shorea
Shorea is a genus of about 196 species of mainly rainforest trees in the family Dipterocarpaceae. The genus is named after Sir John Shore, the Governor-General of the British East India Company, 1793-1798. They are native to southeast Asia, from Northern India to Malaysia, Indonesia and the...
), with the tallest known living specimen (Shorea faguetiana
Shorea faguetiana
Shorea faguetiana is a species of plant in the Dipterocarpaceae family. It is found in Indonesia, Malaysia, and Thailand. The tallest documented tropical angiosperm is a 88.3 m tall Shorea faguetiana in the Tawau Hills National Park, in Sabah on the island of Borneo.-Source:* Ashton, P. 1998. . ...
) 88.3 m tall. The species of this family are of major importance in the timber
Timber
Timber may refer to:* Timber, a term common in the United Kingdom and Australia for wood materials * Timber, Oregon, an unincorporated community in the U.S...
trade. Their distribution is pantropical
Pantropical
In biogeography, a pantropical distribution one which covers tropical regions of all of the major continents, i.e. in Africa, in Asia and in the Americas. Examples include the plant genera Acacia and Bacopa....
, from northern South America
South America
South America is a continent situated in the Western Hemisphere, mostly in the Southern Hemisphere, with a relatively small portion in the Northern Hemisphere. The continent is also considered a subcontinent of the Americas. It is bordered on the west by the Pacific Ocean and on the north and east...
to Africa
Africa
Africa is the world's second largest and second most populous continent, after Asia. At about 30.2 million km² including adjacent islands, it covers 6% of the Earth's total surface area and 20.4% of the total land area...
, the Seychelles
Seychelles
Seychelles , officially the Republic of Seychelles , is an island country spanning an archipelago of 115 islands in the Indian Ocean, some east of mainland Africa, northeast of the island of Madagascar....
, India
India
India , officially the Republic of India , is a country in South Asia. It is the seventh-largest country by geographical area, the second-most populous country with over 1.2 billion people, and the most populous democracy in the world...
, Indochina
Indochina
The Indochinese peninsula, is a region in Southeast Asia. It lies roughly southwest of China, and east of India. The name has its origins in the French, Indochine, as a combination of the names of "China" and "India", and was adopted when French colonizers in Vietnam began expanding their territory...
, Indonesia
Indonesia
Indonesia , officially the Republic of Indonesia , is a country in Southeast Asia and Oceania. Indonesia is an archipelago comprising approximately 13,000 islands. It has 33 provinces with over 238 million people, and is the world's fourth most populous country. Indonesia is a republic, with an...
and Malaysia; according to C.Michael Hogan, the greatest diversity of dipterocarpaceae occurs in Borneo
Borneo
Borneo is the third largest island in the world and is located north of Java Island, Indonesia, at the geographic centre of Maritime Southeast Asia....
, which island holds 155 distinct species.

Some species are now endangered
Endangered species
An endangered species is a population of organisms which is at risk of becoming extinct because it is either few in numbers, or threatened by changing environmental or predation parameters...
as a result of overcutting, extensive illegal logging
Illegal logging
Illegal logging is the harvest, transportation, purchase or sale of timber in violation of laws. The harvesting procedure itself may be illegal, including using corrupt means to gain access to forests; extraction without permission or from a protected area; the cutting of protected species; or the...
and habitat conversion. They provide valuable woods
Dipterocarp timber classification
The following table associates tree species, wood name and wood colour....
, aromatic essential oil
Essential oil
An essential oil is a concentrated hydrophobic liquid containing volatile aroma compounds from plants. Essential oils are also known as volatile oils, ethereal oils or aetherolea, or simply as the "oil of" the plant from which they were extracted, such as oil of clove...
s, balsam, resins and are a source for plywood
Plywood
Plywood is a type of manufactured timber made from thin sheets of wood veneer. It is one of the most widely used wood products. It is flexible, inexpensive, workable, re-usable, and can usually be locally manufactured...
.

The dipterocarp family is generally divided into three subfamilies:
.


A recent genetic study found that the Asian dipterocarps share a common ancestor with the Sarcolaenaceae
Sarcolaenaceae
The Sarcolaenaceae are a family of flowering plants endemic to Madagascar. The family includes 40 species of mostly evergreen trees and shrubs in ten genera....
, a tree family endemic to Madagascar. This suggests that ancestor of the Dipterocarps originated in the southern supercontinent of Gondwana
Gondwana
In paleogeography, Gondwana , originally Gondwanaland, was the southernmost of two supercontinents that later became parts of the Pangaea supercontinent. It existed from approximately 510 to 180 million years ago . Gondwana is believed to have sutured between ca. 570 and 510 Mya,...
, and that the common ancestor of the Asian dipterocarps and the Sarcolaenaceae was found in the India-Madagascar-Seychelles land mass millions of years ago, and were carried northward by India, which later collided with Asia and allowed the dipterocarps to spread across Southeast Asia and Malaysia. The first dipterocarp pollen has been found in Myanmar (which at that time was part of the Indian plate) and it dates from the upper Oligocene
Oligocene
The Oligocene is a geologic epoch of the Paleogene Period and extends from about 34 million to 23 million years before the present . As with other older geologic periods, the rock beds that define the period are well identified but the exact dates of the start and end of the period are slightly...
. The sample appears to slowly increase in terms of diversity and abundance across the region into the mid-Miocene
Miocene
The Miocene is a geological epoch of the Neogene Period and extends from about . The Miocene was named by Sir Charles Lyell. Its name comes from the Greek words and and means "less recent" because it has 18% fewer modern sea invertebrates than the Pliocene. The Miocene follows the Oligocene...
Chemical traces of dipterocarp resins have been found dating back to the Eocene
Eocene
The Eocene Epoch, lasting from about 56 to 34 million years ago , is a major division of the geologic timescale and the second epoch of the Paleogene Period in the Cenozoic Era. The Eocene spans the time from the end of the Palaeocene Epoch to the beginning of the Oligocene Epoch. The start of the...
of India.

52-million-year-old amber
Amber
Amber is fossilized tree resin , which has been appreciated for its color and natural beauty since Neolithic times. Amber is used as an ingredient in perfumes, as a healing agent in folk medicine, and as jewelry. There are five classes of amber, defined on the basis of their chemical constituents...
found in the Gujarat province, India
India
India , officially the Republic of India , is a country in South Asia. It is the seventh-largest country by geographical area, the second-most populous country with over 1.2 billion people, and the most populous democracy in the world...
, containing a large amount of fossilized arthropod
Arthropod
An arthropod is an invertebrate animal having an exoskeleton , a segmented body, and jointed appendages. Arthropods are members of the phylum Arthropoda , and include the insects, arachnids, crustaceans, and others...
s, was identified as sap from the Dipterocarpaceae family.