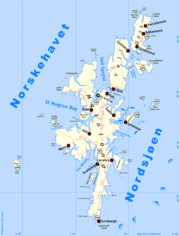 Sullom Voe is an inlet
Inlet
An inlet is a narrow body of water between islands or leading inland from a larger body of water, often leading to an enclosed body of water, such as a sound, bay, lagoon or marsh. In sea coasts an inlet usually refers to the actual connection between a bay and the ocean and is often called an...
between North Mainland
North Mainland
The North Mainland of the Shetland Islands is the part of the Mainland lying north of Voe .Notable places in North Mainland include:*Sullom Voe, its oil terminal being an important source of employment for the islanders.*Brae...
and Northmavine
Northmavine
Northmavine is a peninsula of Shetland in Scotland. It is in the north west of the island, and contains the villages of Hillswick, Ollaberry, and North Roe...
on Shetland in Scotland
Scotland
Scotland is a country that is part of the United Kingdom. Occupying the northern third of the island of Great Britain, it shares a border with England to the south and is bounded by the North Sea to the east, the Atlantic Ocean to the north and west, and the North Channel and Irish Sea to the...
. It is a location of the Sullom Voe oil terminal
Sullom Voe Terminal
The Sullom Voe Terminal is an oil and liquefied gas terminal at Sullom Voe in the Shetland Islands of Scotland. It handles production from oilfields in the North Sea and East Shetland Basin...
. The word Voe is from the Old Norse vagr and denotes a small bay or narrow creek.

The Voe, the longest in Shetland, and partially sheltered by the island of Yell was used as a military
Military
A military is an organization authorized by its greater society to use lethal force, usually including use of weapons, in defending its country by combating actual or perceived threats. The military may have additional functions of use to its greater society, such as advancing a political agenda e.g...
base during World War II
World War II
World War II, or the Second World War , was a global conflict lasting from 1939 to 1945, involving most of the world's nations—including all of the great powers—eventually forming two opposing military alliances: the Allies and the Axis...
both by the Norwegian Air Force
Royal Norwegian Air Force
The Royal Norwegian Air Force is the air force of Norway. It was established as a separate arm of the Norwegian armed forces on 10 November 1944. The RNoAF's peace force is approximately 1,430 employees . 600 personnel also serve their draft period in the RNoAF...
and by the RAF
Royal Air Force
The Royal Air Force is the aerial warfare service branch of the British Armed Forces. Formed on 1 April 1918, it is the oldest independent air force in the world...
as a base for flying boat
Flying boat
A flying boat is a fixed-winged seaplane with a hull, allowing it to land on water. It differs from a float plane as it uses a purpose-designed fuselage which can float, granting the aircraft buoyancy. Flying boats may be stabilized by under-wing floats or by wing-like projections from the fuselage...
s. With the coming of the oil terminal, the remains of the airbase were upgraded and modernised to create Scatsta Airport
Scatsta Airport
Scatsta Airport , is a commercial airport on Shetland in Scotland located north of Lerwick and southwest of Sullom Voe Terminal.Scatsta Aerodrome has a CAA Ordinary Licence that allows flights for the public transport of passengers or for flying instruction as authorised by the licensee...
which is primarily used to service the terminal.

The first crude oil was discovered in the North Sea
North Sea
In the southwest, beyond the Straits of Dover, the North Sea becomes the English Channel connecting to the Atlantic Ocean. In the east, it connects to the Baltic Sea via the Skagerrak and Kattegat, narrow straits that separate Denmark from Norway and Sweden respectively...
in 1969, and soon thereafter construction began on the oil terminal at Sullom Voe, north east of the village of Brae
Brae
Brae is a settlement on the mainland of the Shetland Islands in Scotland. It is located at the northeast end of Busta Voe, on the narrow isthmus that separates the mainland from Northmavine...
, which became operational in 1975 and was completed in 1982, becoming the largest in Europe
Europe
Europe is, by convention, one of the world's seven continents. Comprising the westernmost peninsula of Eurasia, Europe is generally 'divided' from Asia to its east by the watershed divides of the Ural and Caucasus Mountains, the Ural River, the Caspian and Black Seas, and the waterways connecting...
. Oil flows via pipeline from the Brent
Brent oilfield
The Brent field is an oil field located in the East Shetland Basin north-east of Lerwick, Shetland Islands, Scotland at the water depth of . The field operated by Shell UK Limited was once one of the most productive parts of the UK's offshore assets but is now nearing the end of its useful...
and Ninian oil field
Oil field
An oil field is a region with an abundance of oil wells extracting petroleum from below ground. Because the oil reservoirs typically extend over a large area, possibly several hundred kilometres across, full exploitation entails multiple wells scattered across the area...
s to be loaded onto tanker
Tanker (ship)
A tanker is a ship designed to transport liquids in bulk. Major types of tankship include the oil tanker, the chemical tanker, and the liquefied natural gas carrier.-Background:...
s at Sullom Voe. It has recently begun to serve North Atlantic oil fields as well.

When Shetland was identified as a location to provide pipeline terminal and support facilities for off-shore oil installations in the northern North Sea
North Sea
In the southwest, beyond the Straits of Dover, the North Sea becomes the English Channel connecting to the Atlantic Ocean. In the east, it connects to the Baltic Sea via the Skagerrak and Kattegat, narrow straits that separate Denmark from Norway and Sweden respectively...
, corporations involved had expected to each build their own terminal facilities. However, wishing to minimise the negative impacts of the industry, the Shetland Islands Council
Shetland Islands Council
The Shetland Islands Council is the local authority for Shetland. It was established by the Local Government Act 1973 and is the successor to the former Lerwick Town Council and Zetland County Council...
(SIC), with power granted to it by the UK Parliament in the 1974 Zetland County Council Act (ZCC Act), were able to contain all pipeline terminal facilities at the Sullom Voe site, now operated by BP
BP
BP p.l.c. is a global oil and gas company headquartered in London, United Kingdom. It is the third-largest energy company and fourth-largest company in the world measured by revenues and one of the six oil and gas "supermajors"...
on behalf of a consortium of companies operating in the North Sea and North Atlantic.
The source of this article is wikipedia, the free encyclopedia.  The text of this article is licensed under the GFDL.