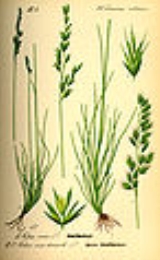 Encyclopedia
Sheep's Fescue or Sheep Fescue (Festuca ovina) is a species
Species
In biology, a species is one of the basic units of biological classification and a taxonomic rank. A species is often defined as a group of organisms capable of interbreeding and producing fertile offspring. While in many cases this definition is adequate, more precise or differing measures are...
of grass
Poaceae
The Poaceae is a large and nearly ubiquitous family of flowering plants. Members of this family are commonly called grasses, although the term "grass" is also applied to plants that are not in the Poaceae lineage, including the rushes and sedges...
.

It is a perennial plant
Perennial plant
A perennial plant or simply perennial is a plant that lives for more than two years. The term is often used to differentiate a plant from shorter lived annuals and biennials. The term is sometimes misused by commercial gardeners or horticulturalists to describe only herbaceous perennials...
sometimes found in acidic ground, for example in the Portlethen Moss
Portlethen Moss
The Portlethen Moss is an acidic bog nature reserve located to the west of the town of Portlethen, Aberdeenshire in Scotland. Like other mosses, this wetland area supports a variety of plant and animal species, even though it has been subject to certain development and agricultural degradation...
, Scotland
Scotland
Scotland is a country that is part of the United Kingdom. Occupying the northern third of the island of Great Britain, it shares a border with England to the south and is bounded by the North Sea to the east, the Atlantic Ocean to the north and west, and the North Channel and Irish Sea to the...
and mountain pasture, throughout Europe
Europe
Europe is, by convention, one of the world's seven continents. Comprising the westernmost peninsula of Eurasia, Europe is generally 'divided' from Asia to its east by the watershed divides of the Ural and Caucasus Mountains, the Ural River, the Caspian and Black Seas, and the waterways connecting...
(with the exception of some Mediterranean areas
Mediterranean Basin
In biogeography, the Mediterranean Basin refers to the lands around the Mediterranean Sea that have a Mediterranean climate, with mild, rainy winters and hot, dry summers, which supports characteristic Mediterranean forests, woodlands, and scrub vegetation...
) and eastwards across much of Asia; it has also been introduced to North America
North America
North America is a continent wholly within the Northern Hemisphere and almost wholly within the Western Hemisphere. It is also considered a northern subcontinent of the Americas...
.

It is sometimes used as a drought-tolerant
Xeriscaping
Xeriscaping and xerogardening refers to landscaping and gardening in ways that reduce or eliminate the need for supplemental water from irrigation...
lawn
Lawn
A lawn is an area of aesthetic and recreational land planted with grasses or other durable plants, which usually are maintained at a low and consistent height. Low ornamental meadows in natural landscaping styles are a contemporary option of a lawn...
grass.

Sheep's fescue is a densely tufted perennial grass. Its greyish green leaves are short and bristle-like. The panicles are both slightly feathery and a bit one-sided. It flowers from May until June, and is wind pollinated.

See also List of Lepidoptera that feed on grasses


This is one of the food plants for the caterpillar
Caterpillar
Caterpillars are the larval form of members of the order Lepidoptera . They are mostly herbivorous in food habit, although some species are insectivorous. Caterpillars are voracious feeders and many of them are considered to be pests in agriculture...
s of several butterflies and moths, including the Gatekeeper and the Meadow Brown
Meadow Brown
The Meadow Brown, Maniola jurtina, is a butterfly found in European meadows, where its larvae feed on grasses, such as Sheep's Fescue.Similar species are Gatekeeper and Small Heath ....
, the Small Heath
Small Heath (butterfly)
The Small Heath Coenonympha pamphilus is a butterfly species belonging to the family Nymphalidae, . It is widespread in Eurasia and northwestern Africa, preferring drier habitats than other Coenonymphae...
, and the grass moth Agriphila inquinatella
Agriphila inquinatella
Agriphila inquinatella is a small moth species of the family Crambidae. It is found in Europe, around the Caucasus area to Turkestan, and in the Near East to Jordan.Three subspecies are accepted today:...
.