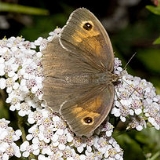 Encyclopedia
The Meadow Brown, Maniola jurtina, is a butterfly found in European meadow
Meadow
A meadow is a field vegetated primarily by grass and other non-woody plants . The term is from Old English mædwe. In agriculture a meadow is grassland which is not grazed by domestic livestock but rather allowed to grow unchecked in order to make hay...
s, where its larva
Larva
A larva is a distinct juvenile form many animals undergo before metamorphosis into adults. Animals with indirect development such as insects, amphibians, or cnidarians typically have a larval phase of their life cycle...
e feed on grass
Grass
Grasses, or more technically graminoids, are monocotyledonous, usually herbaceous plants with narrow leaves growing from the base. They include the "true grasses", of the Poaceae family, as well as the sedges and the rushes . The true grasses include cereals, bamboo and the grasses of lawns ...
es, such as Sheep's Fescue
Sheep's Fescue
Sheep's Fescue or Sheep Fescue is a species of grass.-General Description:It is a perennial plant sometimes found in acidic ground, for example in the Portlethen Moss, Scotland and mountain pasture, throughout Europe and eastwards across much of Asia; it has also been introduced to North...
.

Similar species are Gatekeeper
Gatekeeper Butterfly
The Gatekeeper sometimes called the Hedge Brown is a common butterfly in the United Kingdom. It is a member of the subfamily Satyrinae in the family Nymphalidae. A similar species is the Meadow Brown; the two species can be difficult to distinguish with closed wings since underwing markings are...
(which prefers to rest with its wings open) and Small Heath
Small Heath (butterfly)
The Small Heath Coenonympha pamphilus is a butterfly species belonging to the family Nymphalidae, . It is widespread in Eurasia and northwestern Africa, preferring drier habitats than other Coenonymphae...
(which is smaller).

There is marked sexual dimorphism
Sexual dimorphism
Sexual dimorphism is a phenotypic difference between males and females of the same species. Examples of such differences include differences in morphology, ornamentation, and behavior.-Examples:-Ornamentation / coloration:...
in this species
Species
In biology, a species is one of the basic units of biological classification and a taxonomic rank. A species is often defined as a group of organisms capable of interbreeding and producing fertile offspring. While in many cases this definition is adequate, more precise or differing measures are...
. Males are less colorful, with smaller eyespot
Eyespot (mimicry)
An eyespot is an eye-like marking. They are found on butterflies, reptiles, birds and fish. In members of the Felidae family , the white circular markings on the backs of the ears are termed ocelli, and they are functionally similar to eyespots in other animals.Eyespots may be a form of...
s and much reduced orange areas on the upper forewings. They are also much more active and range far about, while females fly less and often may not away from the area where they grew up.

A variable number of smaller eyespots are usually found on the hindwing undersides. These may number up to 12 per individual butterfly, with up to 6 on each wing. The factors that govern polymorphism
Polymorphism (biology)
Polymorphism in biology occurs when two or more clearly different phenotypes exist in the same population of a species — in other words, the occurrence of more than one form or morph...
in this trait are not resolved, although a number of theories have been proposed (Stevens 2005). On the other hand, the evolution
Evolution
Evolution is any change across successive generations in the heritable characteristics of biological populations. Evolutionary processes give rise to diversity at every level of biological organisation, including species, individual organisms and molecules such as DNA and proteins.Life on Earth...
ary significance of the upperwing eyespots is more obvious: The more active males have a markedly more cryptic
Crypsis
In ecology, crypsis is the ability of an organism to avoid observation or detection by other organisms. It may be either a predation strategy or an antipredator adaptation, and methods include camouflage, nocturnality, subterranean lifestyle, transparency, and mimicry...
upperside pattern, whereas the females have more often opportunity to present their eyespots in a sudden display of colors and patterns that presumably make neophobic predators hesitate so that the butterfly has better chances of escaping.
The source of this article is wikipedia, the free encyclopedia.  The text of this article is licensed under the GFDL.